RJ Hampton Might Be the Next Boom or Bust Draft Candidate 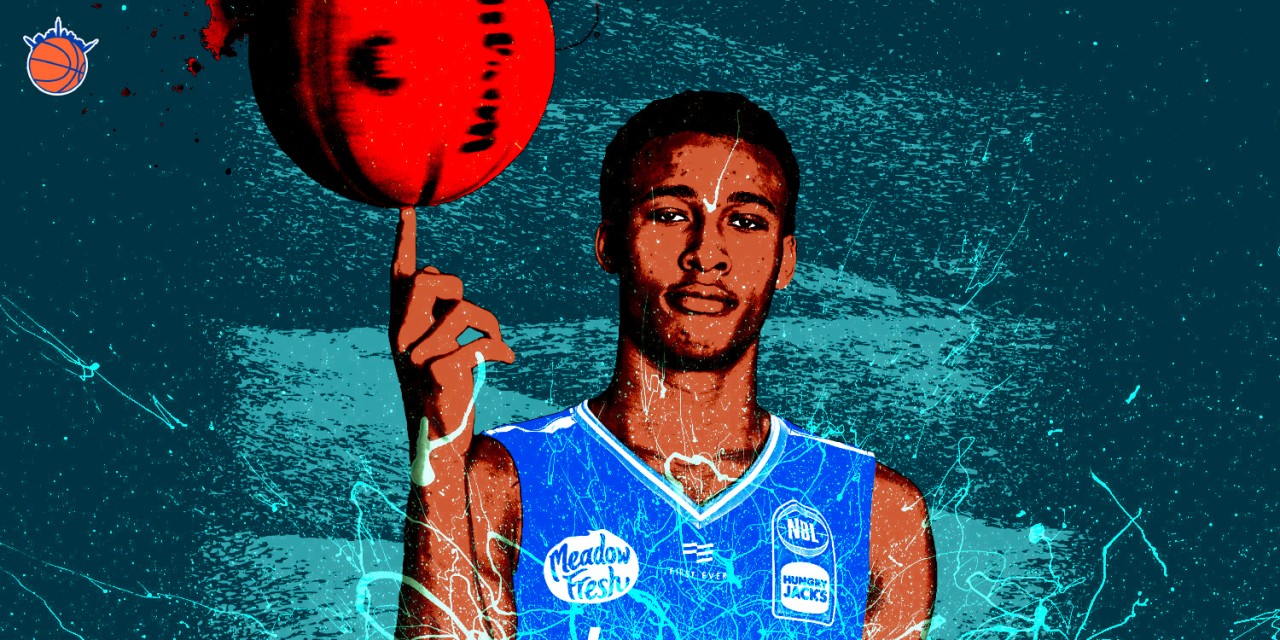 Though we don’t yet know when it will be, the 2020 NBA Draft will, presumably, take place this year. As such, what better time to dig into some of the prospects who will be waiting to hear their name called, in person or over Zoom, when it does?

R.J. Hampton is probably the best candidate for this year’s Man of Mystery among the consensus top 12 or so prospects. That may sound strange for a two-time FIBA gold medalist and winner of Texas’ Gatorade Player of the Year (the first non-senior to do so since Justise Winslow), but Hampton’s path has been anything but straightforward. He reclassified to be a part of the 2020 draft class, meaning he skipped the McDonald’s All-American game, along with the other All Star–type games that most high draft picks use as a platform to impress scouts. Then, not only did he turn down offers from Texas Tech, Kansas, and Memphis (among others) to instead play professionally in Australia’s National Basketball League, but his season was ended by a hip flexor injury after just 15 games.

Because we have fewer than 20 games, including preseason, of his post–high school career but which to judge him, there are obvious challenges in terms of scouting the Dallas, Texas, native. Without the opportunity to truly settle into his role in a completely new part of the world and competition level, it’s impossible to say whether his inconsistent numbers would have stabilized or how much Hampton learned over the course of the season.

What we can take away from his performances paints an intriguing, but potentially treacherous picture. In many ways Hampton resembles Dante Exum as a prospect: the limited tape, the Australia connection, the size and speed that makes him so interesting to begin with. And of course, the concern about the jump shot.

So, let’s break him down category by category to see where his strengths and weaknesses lie.

As previously mentioned, much of Hampton’s appeal as a prospect comes from his combination of size and blurring speed. He should be able to wreak havoc in the open floor at the next level, with or without the ball in his hands. He played alongside another primary ball-handler for much of his time with the New Zealand Breakers (University of Nebraska alum Sek Henry) and learned how to space or cut on fast breaks, utilizing his physical gifts to get easy looks.

Yet the most interesting part of his transition offense isn’t actually his raw athleticism but rather his patience and guile. Hampton doesn’t have to rely on his speed, though sometimes he gets in trouble by being too sped up, because his most dangerous weapon is his change of pace. He has a lightning-quick Euro step and manipulates back-peddling defenders to get where he wants on the floor.

His attacks are made more deadly by how unselfish he is transition. Hampton uses his athleticism and instincts to get his teammates easy looks when the defense keys in on him, and he loves slipping passes to a rolling big man when he gives them enough time to run the floor with him.

In a league where so many players space out to the three on transition, Hampton is a sure bet to be able to make read-and-react plays to get his shooters involved—or take it all the way to the cup himself.

Which brings us to Hampton’s second-best attribute as a prospect.

There’s a big difference between being a talented passer and being a willing passer (Julius Randle is an example of this phenomenon). But Hampton firmly checks off both boxes. He takes pride in being a skill guy as well as an athlete, and he seems to genuinely delight in setting the table for his teammates. He doesn’t have the virtuoso vision of LaMelo Ball, who sees passes before the lanes even open up, but Hampton is impressive in how he takes advantage of the openings when he sees them.

What a pass from RJ Hampton pic.twitter.com/HVDM7Miii7

His offensive limitations keep him from being as effective a passer as other prospects, but he’s good at moving without the ball and taking advantage of scrambling defenses. He loves throwing alley-oops (Mitchell Robinson would enjoy playing with him), though he could afford to be a little more judicious with them; his passes tend to miss badly when they miss.

Having praised his passing ability, it’s worth mentioning that his vision probably won’t directly translate into playing lead guard in the NBA. Hampton had nearly as many games with only one assists as he did multi-assist games, and only 36 total assists in just over 300 minutes. He’ll likely be best served playing alongside another primary initiator, preferably one who can shoot.

Hampton’s halfcourt offense is a bit of a mixed bag, but there are some real positives to take away from his performance against the grown men of the NBL. He might have the fastest first step among potential lottery guys, and while he’s not Anthony Edwards as an above-the-rim athlete, he’s got some real pop.

As is the case with his transition game, his ability to start and stop at a moment’s notice helps him get to the basket against slower defenders with ease. He’s good at staying low to turn the corner on a defender and is crafty going under or around defenders—though he sometimes gets a little too cute on his drives.

R.J. Hampton’s shot isn’t exactly a strength—it never has been—but there are reasons to be hopeful. According to The Stepien, “through his first nine NBL regular season games for the New Zealand Breakers, Hampton [shot] 35.7 percent from 3 on 5 attempts per 36 minutes, with the majority of these attempts coming off the catch.” That’s a small sample size, and it’s boosted by a 4-for-6 outing against Cairns (shown below), but his whole season is a small sample size. The only spot he seems to be truly comfortable shooting from is the left corner, but having a corner three in the bag is an important skill for an off-guard to possess.

His shot isn’t great, but it’s not busted. It just needs a little adjusting. He even shows a little juice off the bounce. I would be somewhat surprised if he’s ever a knockdown pull-up shooter, but it’s within his range of outcomes. If I were to find a familiar reference point for his pull-up game, I might say a more aggressive Frank Ntilikina. Take that as you will.

But the cons outweigh the pros when it comes to Hampton’s shooting profile. He shot 29.5% from three on 5.1 attempts per 36 minutes (per Sports-Reference) and 68% from the free throw line this season, and while he has historically been a bit better free throw shooter than that, the three-point percentage is pretty consistent with where he’s been for the last couple years in FIBA and EYBL. He has a narrow base on his shot and doesn’t seem to have great touch, either on his jumpers or on his drives to the rim. He has a lot of bad misses, and only some of that can be attributed to shot selection.

His touch around the rim is especially concerning, as it would seem to indicate a larger issue with his shooting than just the narrow hips and close-set legs.

Hampton’s defense this season was mostly terrible, but he’s not without his positives. When locked in, he’s capable of making impressive plays based on his athleticism and instincts, and that often leads to good things for his team as he pushes in transition. Take this example of him refusing to allow himself to enter the torture chamber against the Point God, and then making the good read on the other end:

So, that’s the good, but here’s the bad: he is just an atrocious defender in terms of understanding, discipline, and intensity. At his best, he makes the kind of athletic reads mentioned above, but those are more flashes than they are a consistent level of play. He keeps his hands down on defense, dies on screens, and his closeouts are usually either nonexistent or disastrous in terms of technique. He consistently gets burned by slower guys (as Tyus Jones shows us below) or bullied by smaller guys, because he plays even smaller than his skinny frame would suggest.

But worse than the technique issues are the amount of times he just completely stops trying. Whether it’s not contesting a shot or just taking himself out of the play, there are too many moments that look like this:

Even in King of the Court you can see his lack of intensity. His hands stay low, he doesn’t really lock in or widen his stance, and his closeouts are slow or nonexistent.

There’s only so much you can know about another person, and that amount drops precipitously when you’ve never met them, so take this with a grain of salt. Hampton seems like a smart, affable young man who thinks intensely and realistically about himself and his place in the world. He’s been in the spotlight for a long time, and has been followed by cameras since he was a sophomore in high school (his junior year, he had a YouTube show called “R.J.’s World” and his dad is a bit of character who seems to fancy himself a reality show star). But all of that is to say he seems like the kind of player who understands his weaknesses and will work hard to address them, and like someone who can handle the spotlight of being a top pick in the NBA.

Hampton is a pretty decent boom or bust candidate in my opinion. He could become a really interesting player, but I doubt New York is where it happens. While you don’t want to draft for fit in the top 10, Hampton is probably the worst fit for this roster of any guard projected in the lottery, and is unlikely to be considered the best player available even if the Knicks fall to nine. It’s hard to imagine the Knicks maximizing his value as much as a team like Washington or Charlotte, who have shooting playmakers as their lead guards, especially considering the Knicks’ anemic history of developing jump shots in their draft picks. It seems like it would be in everyone’s best interest for the Knicks to pass on the springy combo guard.

»READ: The Knicks Wall 2020 Draft Board — third edition: return to the top