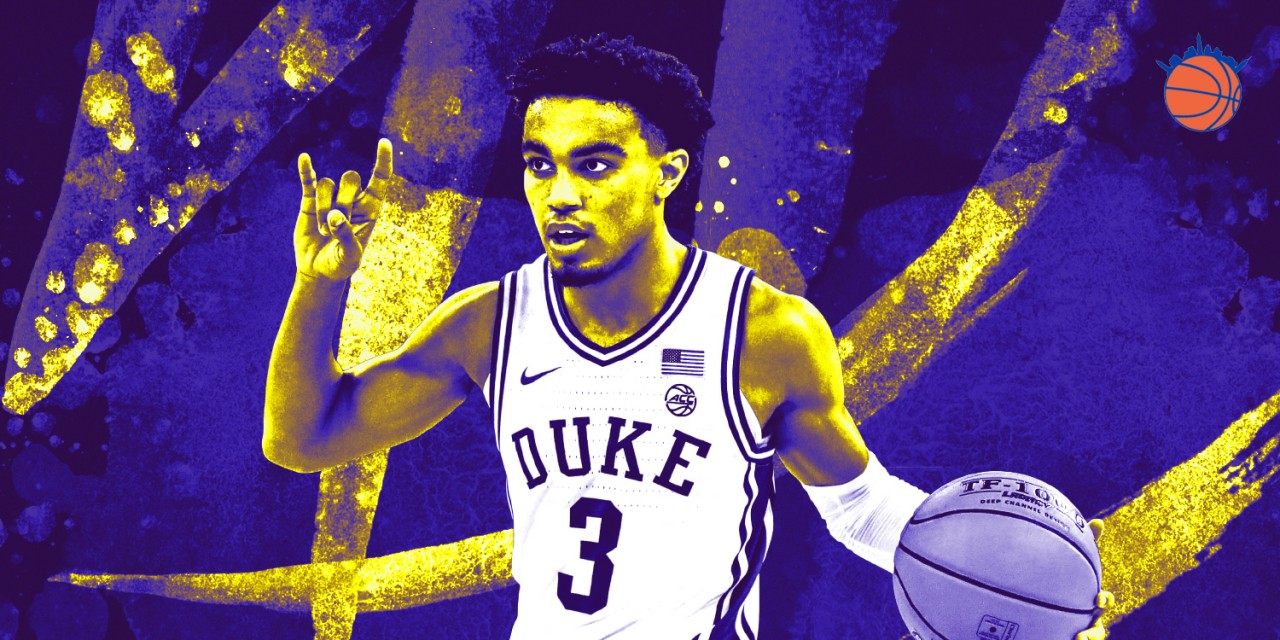 Duke point guard Tre Jones was criticized while playing alongside RJ Barrett and Zion Williamson, but an extra year helped the savvy facilitator.

The Duke Blue Devils have long been one of the most polarizing programs in college basketball. Every year, you know they’re going to be high in the AP Top 25 poll. They’re consistently among the favorites to be in the national championship. Likewise, every year, there are going to be thousands of people screaming “BEAT DUKE!”.


For all the praise, they have had seasons where they fall short of expectations; like in 2018–19, where the Zion Williamson and R.J. Barrett led-squad fell in the Elite Eight. Nevertheless, what has changed in the last few years is the fan chatter around Duke basketball.

Jason Gay in the Wall Street Journal called that season’s Duke team “adorable” and “the circus you have to see.” Perhaps Duke was becoming less hated. After Barrett and Williamson left, sophomore Tre Jones was tasked with continuing the culture of making Duke games a must-watch for basketball fans. Much like his older brother Tyus on the 2014–15 team, Tre Jones was a perfect complement to offensive juggernauts.

As a freshman, Jones averaged just 9.4 points per game. What immediately stood out about him was how relentless he was defensively. At 6-foot-3, he’s not necessarily a small guard, but he didn’t need that physical stature to pose a problem. He was third in the ACC for steals with 68 as a freshman and was sure to surpass that in his sophomore year.


Jones indeed returned to improve his weak areas, which included shooting from long distance. In fact, when asked about the aspects of his games that have gotten better. Jones told The Athletic, “I was able to show that I can shoot the ball much better than I did last year; I think that was one of the biggest things that I improved on.”

Boosting his offensive output to 16.2 points per game and shooting 42% overall, let’s take a look at what makes this ACC Player of the Year a perfect late first-round steal for the New York Knicks.

He knows his angles

One thing that stands out about this draft class is how some of the guards are not elite at finishing at the rim. Generally, they show flashes going downhill and attacking in order to create for teammates. Unlike Kira Lewis Jr., Jones has a slight edge driving to the rim. Those buckets are largely attributed to seeing the lane fairly early in the possession.

For example, in this clip, he sees the gap as far out as the three-point line then aims high and to the left over his defender:

In addition to creating space through angles, Jones’ soft touch and slightly higher arc on his shots allows him to evade many blocked or contested shots.

How this helps the Knicks: Although Jones is not an elite creator, one of the dimensions of his basketball I.Q. is exhibited by the shots he takes and where. He can hit the floater with his eyes closed. The Knicks’ second unit is in desperate need of a guard who can anchor the offense by getting easy buckets. He’s a guard that appears to be more comfortable at pulling up inside rather than jacking up ill-advised long-distance shots, as evidenced by his shot chart this season. Utilizing his soft touch with floaters and craftiness at the rim can be instrumental in keeping and expanding those Knicks leads for which the starters often work so hard.

Duke has the identity of living and dying by the three in crunch time moments. They rarely excel at moving the ball. This year, the Blue Devils averaged 15.5 assists per game. Jones was among one of the more prolific distributors, finishing among the top 20 in assists in the NCAA.


While he may not be as flashy, Jones is one of the best guards in this draft in terms of managing his teammates. Jones is not only vocal on the floor, but his I.Q. allows him to read the defense to be able to follow his teammates for the open pass.

And man, can this kid work in tight windows.

How this helps the Knicks: For the past five years, we’ve seen an assortment of different types of guards. This season, we saw a willingness to pass from Elfrid Payton. There were even stretches where Barrett brought the ball up. Yet, the Knicks were 27th in assists per game. The fact of the matter is it’s been awhile since we’ve had a point guard that actively manages the game as a floor general. Jones’ film indicates that the extra year at Duke helped to mold him into a guard with excellent court vision.

In the way that Lewis Jr. will affect the Knicks’ overall pace, for example, it’s similarly true for Tre Jones but for different reasons. He doesn’t waste dribbles. He can go coast to coast himself. But Jones’ game management comes in how he pushes the rock and instinctively knows where to hit his teammates in motion without creating a lot of turnovers.


Jones will make scoring easier for Barrett and Mitchell Robinson in transition. Building the second unit starts with a point guard who makes the smart play consistently. Above all, making Barrett the main scoring option should start with reuniting him with his Duke teammate.

He has the hands

Defense starts in the hands and feet. When you look at the game’s elite defenders, their methodology is often in two parts: a solid foundation in their footwork and the timing of their hands in poking the ball out. Rookies usually struggle early with committing silly fouls because they use too much of one or the other. We’ve seen this with Frank Ntilikina and Mitchell Robinson.

Jones doesn’t possess a sturdy core, but that hasn’t stopped the ACC Defensive Player of the Year from annoying opposing point guards. With great lateral movement and hand work, Jones was an absolute dog in his two seasons at Duke.

Prospect Play of the Day: With Tre Jones declaring for the NBA Draft (via @wojespn), here's what makes him such a disruptive point-of-attack defender. Takes away airspace, active hands/feet, anticipates moves. Has been tasked with checking several NBA PGs during his 2 yrs @ Duke. pic.twitter.com/bqpYjOz7PM

How this helps the Knicks: The Knicks’ guards, for the most part, are inconsistent on-ball defenders. A major contributing factor to this is because there was no permanence in the starting lineup.

As a team, the Knicks netted 13.3 deflections per game. Additionally, the Knicks allowed opponents to hit from long distance at a 38% clip. They were giving up 112 points per game—only slightly better than last season. Only the depleted Golden State Warriors were worst at defending the perimeter. Looking at these statistics together along with film, it’s clear that Knicks guards are prone to giving up on plays man-to-man.

Tre Jones is a tenacious on-ball defender. According to NBA Stats, Jones was in the 64th percentile for points per isolation possession (0.66). If the incoming head coach decides not to utilize Ntilikina in the starting lineup, drafting Tre Jones and pairing him with Frank makes quite an intimidating backcourt in the second unit.

Stephen and Seth Curry. Marcus and Markieff Morris. The Plumlees. The Holidays. It’s often the eldest brother that creates a lofty ideal of what his younger brother could be. Tyus Jones, thus far, has been mostly unremarkable. However, Tre Jones is better than his brother, particularly as a passer and a defender. Spencer Pearlman of The Stepien projects Tre Jones to be a backup guard. I’m inclined to agree with this assessment. After analyzing his game, I echo Eli Cohen’s projection of seeing Jones in the tier of Toronto’s Fred VanVleet.

Before scoffing at the comparison, recall that VanVleet was backing up Kyle Lowry. Also, VanVleet was a four-year college player. As a result, he wasn’t tasked with doing a lot offensively the first two years of his career. But defensively, he’s improved to be the best at his position and overall this season with just under 2.0 steals per game in 35.6 minutes per game. VanVleet’s ability to manage the game as a plug-and-play cog with the second unit serves as an example for what the Knicks can get out of Jones.

The various iterations of the bench mob have been known to fall apart in the third quarters. The front office aimed to address this last offseason by adding shooters Reggie Bullock and Bobby Portis, then trading for sharpshooter Maurice Harkless. At the season’s premature end, the Knicks’ bench was right there with the Raptors, shooting from 45.2% overall to the Raptors’ 45.6%.

Despite being a streaky shooter this season, the Carolina-Duke face off in February showed that Jones can take over a game. He can be impactful with his pull-up jumper. He can keep the defense on its heels by whipping the ball around the perimeter. Or he can create great looks for his teammates out of the pick-and-roll. He may not necessarily be able to guard multiple positions, but he will be a perfect complement next to Ntilikina and Barrett. Assuming Jones bulks up his core and gets more confident shooting the long ball, he is certainly the ideal sixth man/occasional starter for the Knicks going forward.

Having a second first-round pick gives the Knicks multiple options at 27. The expectation is that the team will have a second chance to sign a young player who can maximize the strengths of its cornerstone pieces. Tre Jones is a well-rounded guard who establishes consistency in the guard slot and bench. His familiarity in the pick-and-roll benefits the leaps of both Barrett and Mitchell Robinson. If they fall out of having a top five in the lottery and opt to take one of the 3-and-D prospects first, Tre Jones becomes another draft steal for the Knicks.

»READ: Should the Knicks consider trading down at the 2020 NBA Draft?