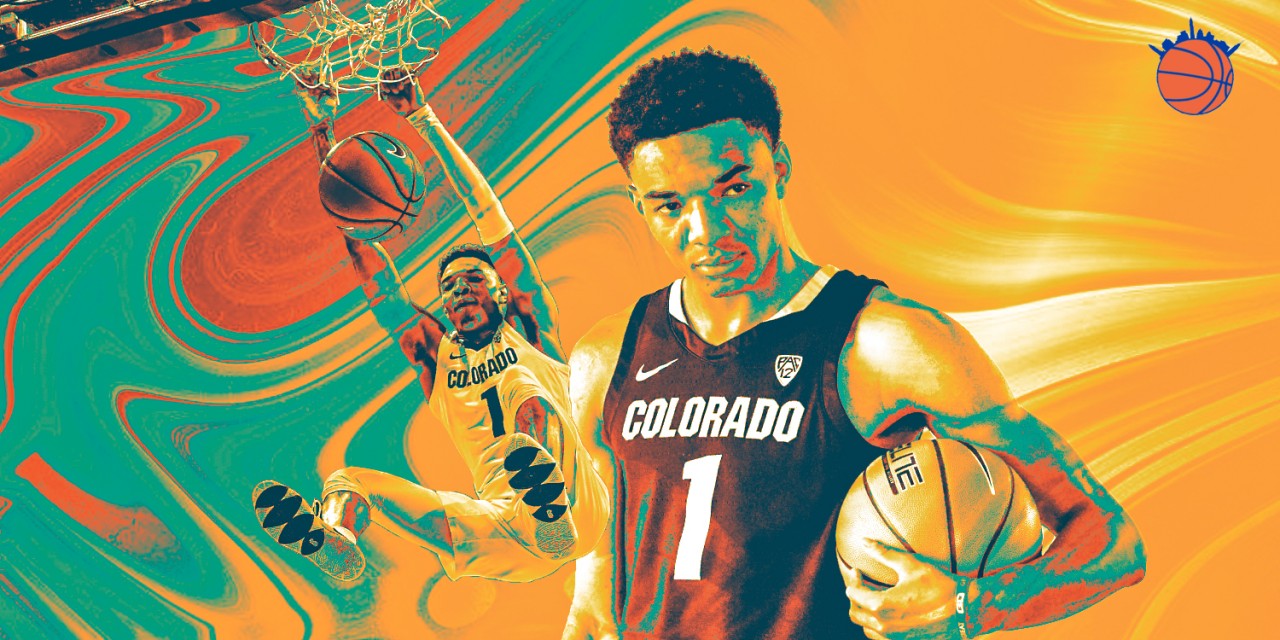 Tyler Bey is a well-crafted, defense-first forward who would fit well with Tom Thibodeau if the Knicks use their late first-round draft pick on him.

In addition to the no. 8 pick in the 2020 NBA Draft, the Knicks also own the Los Angeles Clippers’ first-round selection (no. 27) after dealing Marcus Morris in February—offering Leon Rose two major opportunities (or trade assets) through which to upgrade the team.

With Tom Thibodeau now on board as head coach, any young player who wants minutes will need to offer value on defense, consistent effort, and a degree of NBA-readiness. Plus, in today’s Association, every team could use more rangy, versatile defenders, and doubly for those who can make spot-up jumpers. The Knicks, in fact, could use one of these types—especially if they address point guard in the lottery or through other means.

The 22-year-old measures at 6’7″, 215 pounds, and some experts consider him a potential foundational defensive piece, à la Matisse Thybulle (selected no. 20 by the Philadelphia 76ers, via trade with Boston, last year in a steal that was obvious in the moment).

The Las Vegas native was not highly recruited but produced an impressive three-year run for the Colorado Buffaloes. In 2018–19, he was named the Pac-12’s Most Improved Player of the Year as the team won 23 games. As a junior, he averaged 19.1 points, 12.5 rebounds, 2.1 steals, 1.6 blocks per 40 minutes and was Thybulle’s successor as the conference’s Defensive Player of the Year.

Bey’s greatest strength in his prowess as a team defender—a sentence that is probably music to Thibodeau’s ears. His weak side anticipation, rotating, and general court awareness is celebrated, and Thibodeau’s aggressive strong-side defensive scheme is wholly dependent on punctual (often early) weak-side rotations.

Thibodeau’s scheme also prioritizes stopping drives to the lane, a skill for which Bey has shown an aptitude, as he mostly guarded bigs in college and thrived as an undersized shot-blocker. Consequently, Thibodeau’s defense can be vulnerable to three-point shooting in an increasingly spaced out league, but Bey’s ranginess may give him as good of a prospect as anyone to cover that ground.

Tyler Bey has a strong nose (and enthusiasm) for rebounds on both ends, and his motor on the glass is a microcosm of his overall effort. In college, he wreaked havoc around the rim as a tip-in specialist and with second-chance buckets, though that stuff won’t come as easy in the pros. He’s always a threat to create (and grab) 50/50 balls and disrupt possessions.

Bey’s primary role as an interior big for Colorado left a small sample size of his perimeter defense, but his 7’0″ wingspan, lateral agility, and innate defensive feel project him as a staunch and switchable on-ball wing defender. He’ll need a few more pounds to guard bigs.

On offense, his perimeter playmaking was limited in both effectiveness and opportunity in college, but it’s an undeniable weakness in his game. His shaky handle renders him turnover prone and—for somebody with such a tremendous feel for how to anticipate passes and snuff out plays on defense—he hasn’t shown a knack for setting up teammates on offense. In 2019–20, he posted a horrendous 1.5/2.4 assists-to-turnover ratio. In other words: he would not be a threat to poach pick-and-roll plays from R.J. Barrett.

It’s hard to see Bey developing into a dynamic off-the-bounce creator, so his offensive value will be linked to his ability to space the floor with good-enough spot-up shooting. He shot 41.9% from three in college, but don’t peg him as an ideal 3-and-D just yet; He only attempted 59 triples in his Buffs career, and made just 13 as a junior—mostly open looks. His form is a little funky, though his solid free-throw shooting (75%) is a good sign.

In other words, Bey is a project on offense and a polished prospect on defense. As the Knicks have recently experienced, one-way young players can be extremely frustrating and enticing (Frank Ntilikina).

The organization has struggled to developing the offensive repertoires of Ntilikina, Kevin Knox, and Dennis Smith Jr. (so far), and Thibodeau isn’t exactly known for maximizing offensive talent.

The Knicks’ interest in Tyler Bey will be determined by what they do with the no. 8 pick, but any organization could use more people like him in house, and one can imagine Tom Thibodeau salivating over his defensive rotations on tape. How Bey improves as a perimeter player—on both ends—will determine his ceiling.

However, based on his character, resume, and natural feel for the game, though, I would bet on him to put in the work.

»READ: Is Patrick Williams the project worth trading up for?