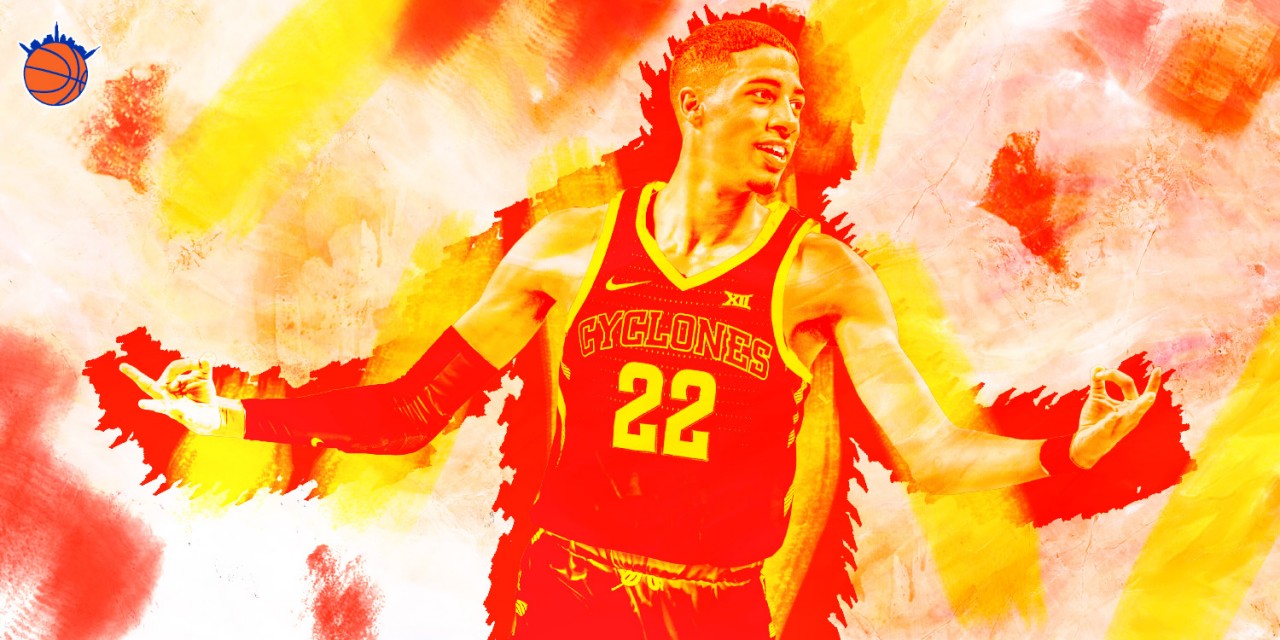 Beyond his strange yet effective jump shot, Iowa State’s Tyrese Haliburton could be a high floor point guard pick in the Knicks’ range.

There are two ways to look at Tyrese Haliburton out of Iowa State. Optimistically, he’s a high-floor, lengthy 6-foot-5 point guard with a remarkable feel, elite passing, and intangibles. He’s also one of the safest picks in the draft.

If your glass is half-empty, the 175-pound Haliburton, 20, is a low-ceiling prospect with a slow shooting stroke who lacks the off-the-dribble ability and physicality to be a dynamic playmaker, and may top out as an average defender against NBA bodies. He’ll make the right play, but to how many wins will he lead you?

Let’s look a closer look at the former Cyclone.

The Oshkosh, Wisconsin native wasn’t projected to start as a freshman before an injury opened the door. He put up modest numbers but displayed an obvious knack for the sport, starting 24 games for a 23-win squad under coach Steve Prohm.

His sophomore season—prefaced by an impressive FIBA U19 World Cup—vaulted him into lottery projections. In 22 games, he averaged 15.2 points, 5.9 rebounds, and 6.5 assists per game, shooting 50.4% from the field, 41.9% from long range, and 82.2% from the free throw line—making him the first player to hit all those marks in one season since 1992–93. He finished second in the Big 12 in True Shooting percentage (63.1), despite taking seven more shots per game (11.1) than as a freshman.

Despite Haliburton’s rise, the Cyclones went 10-12 with Haliburton in 2019–20, (2-10 without him) before a fractured wrist ended his collegiate career in February. NBA evaluators will have to determine if ISU’s struggles are evidence of Haliburton’s low ceiling as your best guy, or if his assists and efficiency should be doubly appreciated considering the roster around him.

With a seven-foot wingspan, Haliburton can theoretically defend multiple wing positions. His instincts are unsurprisingly solid, but questions remain about how his lightweight body and subpar lateral quickness will translate to on-ball NBA defense. He did post excellent steal, block, and rebounding rates in 2019–20, and was often able to use his length to make up for getting beat—which may not work so well at the next level. At the very least, he’ll be a strong team defender.

Offensively, Haliburton is steadfastly in control with an innate sense of tempo. He’s arguably the best passer in the draft, and his long strides and decision-making make him devastating in transition. He has a Jason Kidd–like tendency to grab boards and look for any transition advantages. He’ll always swing the ball correctly, find guys in rhythm, and his size should make him an excellent cross-court disher.

Despite a lack of “blow-by” ability and a shaky handle, he uses feel and pace to create looks. Haliburton excels as a pick-and-roll ball-handler and playmaker. He knows when to hesitate, when to bounce a pass, when to pull up, and how to put touch on a lob pass.

He needs to improve physically to be a threat attacking the rim and get foul shots, though he’s developed a devastating floater to compensate.

His set shot is strange and slow, but it went in 42.6% of the time for Iowa State (there are fewer unorthodox shooting forms than ever in modern hoops, so props to Haliburton for bringing one back). His ability to make catch-and-shoot and/or off-the-dribble threes will have a significant effect on his ceiling. In general, how he develops his off-ball game is paramount. He’s a natural orchestrator, so it’s understandable that he hasn’t taken the off-ball MasterClass.

As it stands, the Knicks have a 50.4% chance of landing the seventh or eighth pick and a 37.2% chance of landing in the top four. Haliburton’s projected to go in the 3-10 range. He’s a consensus top-three point guard (along with LaMelo Ball and Killian Hayes), and only Ball and Hayes can rival his overall playmaking.

Beyond the A+ intangibles, Haliburton should fit nicely alongside R.J. Barrett and Mitchell Robinson and make them better possession to possession. One would expect him to embrace his role setting up a high-volume shot creator like Barrett, and he can provide some much-needed spacing if his shot translates. The idea of Haliburton—a great short-distance lob tosser—hitting Robinson on rim runs is juicy.

His schematic fit will somewhat depend on who gets the head coaching gig, but as long as that person’s offense doesn’t rely too heavily on Haliburton for scoring and promotes pick-and-roll action, the soon-to-be NBA rookie’s unselfishness and maturity should enable him to adapt.

“He checks all the boxes—when you talk character, personality. He’s got an engaging spirit that the fan base will fall in love with. He understands his role—big, small, good or bad—and will buy into it,” Haliburton’s Iowa State coach Steve Prohm told the New York Post‘s Marc Berman two weeks ago.

In many ways, an apt comparison for Haliburton may be Malcolm Brogdon. Brogdon was a second-round pick out of Virginia, but the maturity and feel were unquestioned. Brogdon outpaced a weak first-year class to win Rookie of the Year and is now a borderline All-Star from just constantly making the right decision and being a superb teammate. Ideally, Haliburton’s traits could translate in the same manner.

If a franchise wants to make a splash in the lottery—a possibility that may not exist this draft—then Haliburton may not be the guy. If an organization is looking for improved workplace culture and steady point guard play, he checks the boxes. Personally, I will happily endorse Tyrese Haliburton for next New York Knicks point guard, should he get the job.