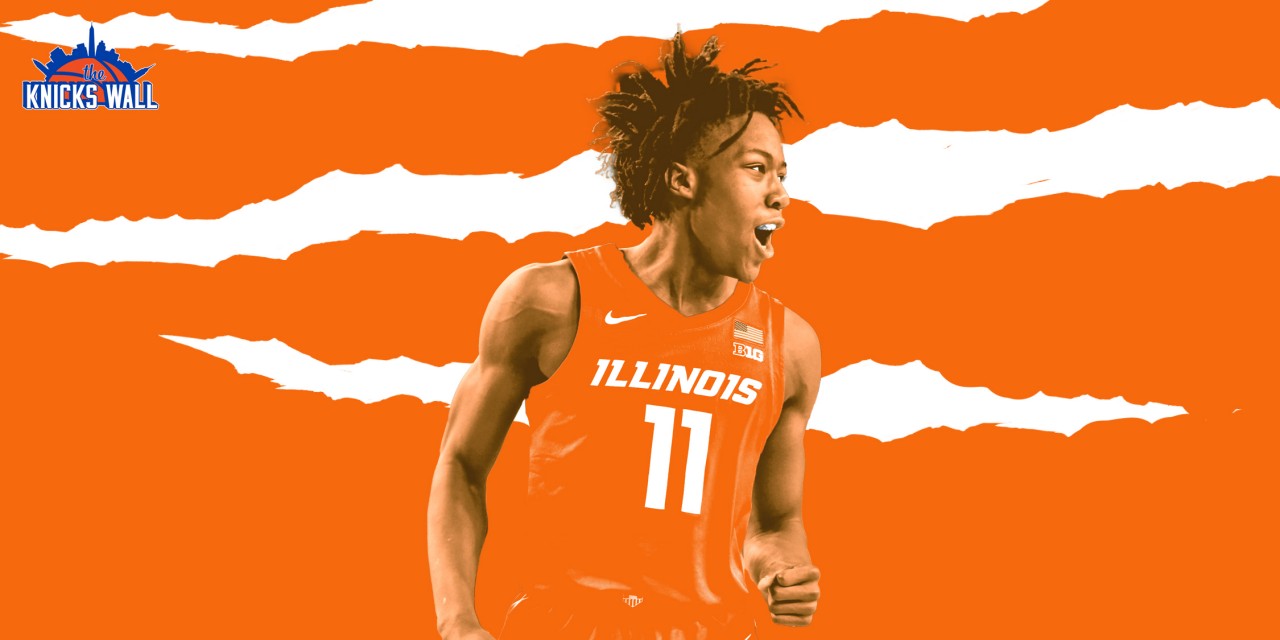 Ayo Dosunmu, a guard from Illinois, has the intensity and skills that would benefit The Knicks. He could help New York on both sides of the ball.

Quamdeen “Ayo” Dosunmu’s basketball journey began at Chicago’s Westinghouse College Prep, where he made an immediate impact as a freshman, leading his team to a conference championship. Dosunmu then went on to Morgan Park High School in Chi-Town and led his team to state championships in his junior and senior year, per Illini Men’s Basketball.

Coming out of high school, the 6-foot-5 combo guard was a four-star recruit, ranked 36th in the 2018 ESPN 100. Dosunmu decided to stay in his home state and play for Brad Underwood at the University of Illinois. In his three seasons, Dosunmu improved his outputs in scoring, rebounding, and assisting, per ESPN Stats. He helped the Fighting Illini double their win total from 12 wins in 2018–19 to 24 wins in ’20–’21.

Dosunmu was the unquestioned best player and leader and was a two-time first-team All-Big Ten selection in his final two seasons in Champaign, Illinois. The Windy City native put on for his home state, leading the Fighting Illini to a number one seed as a junior and putting up 20.1 points, 6.3 rebounds, and 5.3 assists per game. Unfortunately, Illinois ran into the buzzsaw known as Loyola-Chicago and was upset in the second round of the NCAA Tournament.

The 21-year-old decided to forgo his final season of eligibility and declare for the 2021 NBA Draft, where he is projected to be a late first-round pick.

One of the main draws of Dosunmu is his ability to contribute in all aspects of the game. The guard is your prototypical stat-sheet stuffer who can score the rock, use his court vision and crafty moves to distribute, and use his 6-foot-5 frame and intense style of play to be a solid rebounder.

Dosunmu is not afraid to mix it up in the paint and frequently looked to get himself in the lane to finish at the rim and collapse the defense. Ayo’s finishing skills are very good; he can hit floaters, layups, and can elevate pretty well also. A frequent sight when watching Illinois games this past season was no. 11 in orange working his way into the paint in a crafty manner and getting to the rim with conviction.

Dosunmu also plays the game with high energy and has an “it” factor that elevated teammates and gets the crowd going. He has natural flair and leadership skills that cannot be taught and also had experience on his side. With the one-and-done culture being so prevalent nowadays, it often overshadows those guys who play multiple years in college and learn the game before arriving in the NBA. The guard was able to play in high-pressure games and was able to gather some tournament experience, which will be beneficial at the next level, especially if he lands on a contender.

Third player in program history to notch a triple-double pic.twitter.com/88NdCHC5LM

Defensively, Dosunmu puts in the work and has the ideal length with a 6-9 wingspan and evidently is just as locked in when guarding someone as he is when on offense.

The fact that Ayo has improved his offensive stats and his team’s win totals show how valuable he is and that he is a hungry and willing learner. Laziness is just simply not in his DNA.

Like many young players coming into the NBA, Dosunmu struggled with his decision-making at times in college. This past season, the 21-year-old averaged 3.3 turnovers per game as a result of trying to do too much, per ESPN Stats. Dosunmu had pretty good teammates surrounding him in savvy guard Andre Curbelo and skilled big Kofi Cockburn, but sometimes he tried to be too much of a hero and shoulder the offensive load himself. In the Round of 32 tilt, Dosunmu turned the ball over six times and looked out of sorts.

Dosunmu, despite his talents, is a solid, but not great three-point shooter and does not have a very fluid motion on his jumper. Fortunately, he is a great finisher at the rim but will need to find a more consistent flow from behind the arc because his lack of elite quickness and strength likely won’t allow him to get to the basket as easily in the Association.

These are correctable issues for sure, as we see many players come into the league with inconsistent shooting, turnover issues, and non-NBA-ready frames. I believe Dosunmu has the work ethic and the mentality to fix these issues and become a more efficient player and well-rounded scorer.

Based strictly on observation, I see a lot of Russell Westbrook in Ayo Dosunmu. Both are hyper-aggressive, streaky shooters and contribute in the point, rebound, and assist departments. Dosunmu is a bit bigger and not as bouncy and quick as Westbrook, but the mentalities are similar and I believe that Dosunmu can stuff the stat sheet at the next level.

Obviously, Russ is the triple-double king and a future Hall of Famer, so some more realistic comparisons would be Reggie Jackson or Dejounte Murray. Both Murray and Jackson are closer to 12-15 points per game guys currently and I imagine Dosunmu hovering around that range, at least early on in his career. Murray is high energy and similar to what Ayo did at Illinois from season to season, has improved his offensive output from 3.4 points per game his rookie year to 15.7 this past season. Also, Murray was selected 29th overall, similar to where most project Dosunmu to go.

All of these guys have important places on their respective teams, don’t get a ton of shine but are high energy and can produce enough to be valuable assets.

Dosunmu fits the bill for what the Knicks are in dire need of and that’s offensive firepower and playmaking from the backcourt. His ability to create his own shot and jumpstart an offense would be helpful on a Knicks team that struggled to find a rhythm at times and often looked stagnant and ineffective on that end of the floor.

Too often throughout this season, and particularly the playoffs, the Knicks went cold and often resorted to force-feeding Julius Randle and had to rely on the older Derrick Rose, rookie Immanuel Quickley, and Elfrid Payton, who was in Thibs’ doghouse by the time the Hawks series was over. An infusion of young, athletic, and offensive-minded guards into the Knicks’ roster is necessary and I believe Dosunmu would be an ideal fit in the Big Apple.

With the Knicks selecting 19th and 21st in the first round of this year’s draft, Dosunmu will likely be available at those spots. Most mock drafts have Dosunmu being selected in the backend of the first round at 25-30 and I do believe he is being undervalued a bit, given his size, skill set, and experience. If the Knicks stay where they are in the draft and opt to select the guard at either of those picks I think it would be an excellent selection and there is a realistic chance they go the route of taking Dosunmu.

There have been many rumblings however that the Knicks might attempt to trade up and sneak into the lottery and target an elite shooter like Moses Moody or Corey Kispert or a more highly touted point guard like James Bouknight. With Leon Rose having some successful front office experience under his belt and not really taking any big swings last offseason, he may make waves during the draft. If the Knicks do not go in that direction, don’t be surprised if Dosunmu is donning the orange and blue next season.