Is Corey Kispert the Right Fit for the Knicks? 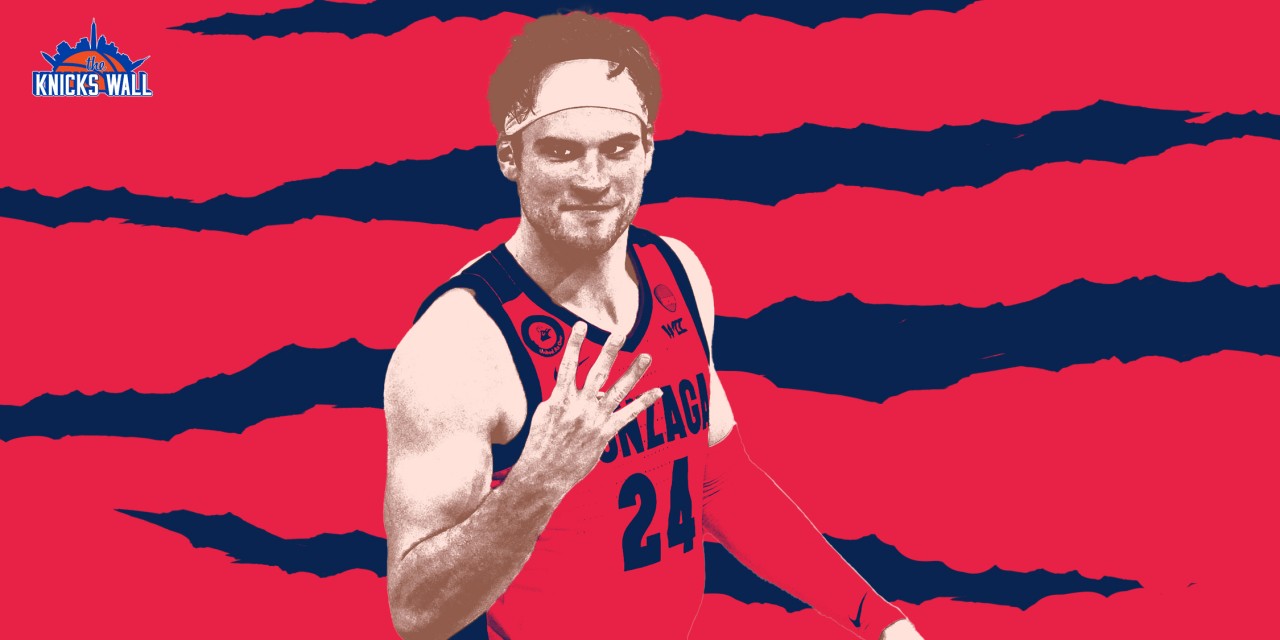 With a need for shooting on the perimeter and a bit more speed in transition, Gonzaga’s Corey Kispert makes sense for the Knicks.


One of several areas where the New York Knicks fell short in their first-round playoff series against the Hawks was Atlanta thriving behind the three-point arc, as they seemingly had a wide-open shooter on every single possession. Between Bogdan Bogdanovic, Kevin Huerter, John Collins, Danillo Gallinari, and Trae Young, this team was nearly impossible to defend.

While the Knicks finished third in the NBA in three-point percentage during the regular season at 39.2%, the playoffs made it clear that they still don’t have enough shooters on the roster. With Julius Randle and R.J. Barrett being players who love to get to the rim, surrounding them with as many shooters as possible gives them the best chance to have enough spacing to succeed.

The Hawks aren’t the only team filling their roster with capable shooters, as the Utah Jazz, a team just two wins away from a Western Conference Finals appearance, sport six players in their eight-man rotation shooting at least 38% from beyond the arc. The Phoenix Suns, Milwaukee Bucks, and Philadelphia 76ers have also made it a priority to stack up on three-point shooters over the last couple of years. It’s worked out beautifully for them.

New York finished with five shooters shooting over 40% from the outside this season. However, three of them, Reggie Bullock, Alec Burks, and Derrick Rose, are unrestricted free agents this summer. Even if two of the three return, the Knicks should add more shooters to the roster. You can never have enough outside shooting.

With four picks in the upcoming NBA draft, the Knicks have a major opportunity to address their shooting need. One player they should be eyeing is Gonzaga wing Corey Kispert, the WCC Player of the Year, who was the second-leading scorer for a Gonzaga team that made it to the NCAA Championship Game and finished with the best offense in college basketball.

corey kispert's such a complete offensive player, off-ball shooting gravity is so synergistic with secondary pnr reads like this pic.twitter.com/54aytzLuor

Let’s take a look at Kispert’s pros and cons as a prospect.

If the Knicks or any other team selects Corey Kispert, they’re drafting him for his three-point shooting. Kispert shot 44% from beyond the arc this past year at Gonzaga on 6.5 attempts per game. In his junior season, he shot 43.8% on 5.4 attempts. It doesn’t matter whether it’s catch-and-shoot plays, spot-ups, or even off a dribble or two or times; his shooting is off-the-charts. Below are highlights from one of Kispert’s best shooting performances of his senior season vs. Virginia.

Incredible 32-point performance for Gonzaga sharpshooter Corey Kispert in a win over UVA. After knocking down 9-of-13 triples., Kispert is now shooting 52% from 3 and 79% from 2 on the season. Already knows how to play out of NBA-style actions. Shooting, size, feel. Plug & play. pic.twitter.com/qsI7jRqcuJ

As teams continue to launch more and more threes in the NBA, players like Kispert are in high demand. Additionally, Kispert’s shooting is pretty much a guarantee, as it’s hard to see him shooting below 37-38% from the outside throughout a single season. While it’s important to be able to shoot the three well, there’s a subtle art to getting open as a catch-and-shoot player. We’ve seen players like Klay Thompson, Bogdan Bogdanovic, and Joe Harris perfect the art of moving without the ball. This is something that Kispert possesses.

Corey Kispert movement without the ball into a catch-and-shoot 3. pic.twitter.com/eX8tKHYXUu

In the clip above, Kispert is constantly moving to the open space, creating a wide-open look for himself once the pass comes. This is so critical to success as a player of Kispert’s mold, and it’s important to see that he understands that.

Kispert’s experience in the Gonzaga offense is a major reason why I’m bullish on him having success in the NBA. According to KenPom.com, Gonzaga ranked first in all of college basketball in adjusted offense and seventh in adjusted tempo. They were a team that loved to push the ball in transition, and Kispert was a huge part of that.

Last season, Kispert was shooting ranked in the 97% percentile in transition scoring efficiency, per Synergy. He shot 65-of-102 on transition attempts, good for 63.7%.

Kispert’s ability to thrive and score in transition is key for a Knicks team that finished last in the league in pace. Knicks head coach Tom Thibodeau doesn’t run a fast-paced offense, but part of their woes this season was due to the point guard position and the lack of someone who can push the pace. As New York addresses their offense this offseason, someone who can help speed things up a bit would be ideal. Adding Kispert on the wing would also assist in that evolution.

Over his four-year career at Gonzaga, Kispert has played 137 games. With a specific skill set and experience as a contributor in college, there’s no doubt in my mind that Kispert will be ready to play legitimate minutes on the opening night of the 2021–22 NBA season.

There are times that scouts see playing three-four years in college as being negative. The Knicks took Kevin Knox over Mikal Bridges because he was two years younger.

In several cases, especially when drafting 3-and-D players, I think it’s a positive for a player to have this much experience. The larger sample size of success is there, which in several cases makes me more confident that the player will translate well to the league. In this article, players such as Kevin Huerter, Mikal Bridges, and Joe Harris; all spent multiple years in college.

The Memphis Grizzlies had Dillon Brooks, Xavier Tillman, Desmond Bane, Grayson Allen, and Brandon Clarke all playing significant minutes in the playoffs for them. All five players spent at least three years in college. None of these players were drafted high, but all were NBA-ready almost immediately.

We know that Kispert will come in and be able to hit threes right away, but another area that’s helped by him staying in college for four years is his defense. There are concerns for Kispert’s defense in the NBA, which will be explained shortly, but he should be an average defensive player at worst right away. In his senior season, his Defensive Box Plus-Minus (DBPM) was 2.0. Additionally, his 6-foot-7 size will help him guard NBA wings.

While Kispert has great size, he’s not the type of player who will blow you away with athleticism. This is why I have slight concerns for him on defense in the NBA. His lack of quickness could lead to opponents easily getting by him.

However, athleticism isn’t necessarily needed as much for a 3-and-D role in the NBA, which is why this isn’t much of a concern for me with Kispert, despite being a con. The lack of athleticism will just limit his ceiling in the league, which leads me to the next Kispert con.

Athleticism is one thing that limits Kispert’s ceiling as a player, but the other is that he’s not a player who’s going to put the ball on the floor in an iso situation and get you a bucket. This isn’t to say that he can’t dribble, or score off the dribble. In fact, Kispert ranked high in efficiency while shooting off the dribble.

That being said, creating his own shot off the dribble isn’t something that Kispert doesn’t do frequently, and that will never be his role in the NBA.

Kispert’s ceiling is obviously limited as he’s not going to create much off the dribble. pic.twitter.com/6yrBuedSZr

As you can see in the clip above, when Kispert is put in an iso situation, he hesitates and then eventually gets stripped. This is something that can be developed, but even if it isn’t this doesn’t mean that Kispert won’t be effective as a 3-and-D player. It just means his ceiling as a player is limited. He’ll probably never be a number one option.

As stressed in the past, it’s okay to take high-floor prospects with lower ceilings. You don’t always need to hit a home run with a draft pick, especially if it’s the 19th or 21st pick. If Kispert turns into a high-level role player/good starter, then that’s a success. After analyzing Kispert’s game, it’s very hard to see him failing to become that. That’s why he’d be the perfect pick for the Knicks in this year’s NBA draft.