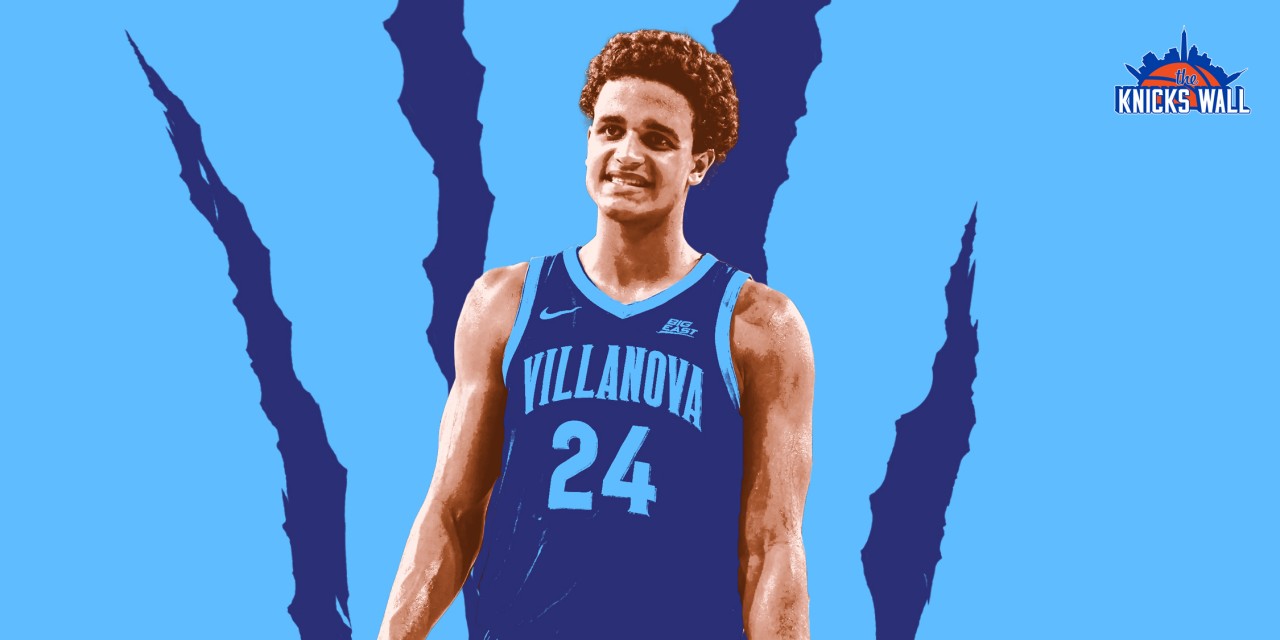 Beyond the positional projection for Villanova’s Jeremiah Robinson-Earl, the tall forward could be a poor fit on the Knicks should the franchise take an early second-round flyer in the NBA Draft.

Villanova has built a great tradition and reputation for its guard play, but in recent years, there have been great wings and forwards coming out of the Wildcats’ program.

With the emergence of Mikal Bridges, an impressive rookie season from Saddiq Bey, Eric Paschall in 2019–20, can Jeremiah Robinson-Earl be the next standout Villanova forward?

Robinson-Earl was a consensus five-star prospect out of Florida powerhouse IMG Academy. The Kansas City native chose Villanova over Kansas, Arizona, North Carolina, and Notre Dame. The 6-foot-9 big man became an impact player upon arrival and was an immediate starter for the Wildcats.

Robinson-Earl started all 56 games over the last two years for Villanova. This past season, he led the team with 15.7 points and 8.5 rebounds per game and was named a co-Big East Player of the Year, as well as a third-team All-American by Sporting News and the National Association of Basketball Coaches (NABC). He shot 49.7% overall and 28.0% from long range.

How will he fare in the NBA?

Scoring ability: Right from the jump, Robinson-Earl showed great finishing ability and footwork down in the post during his debut season. He can be physical and post up his man, or finesse his way into creating space and slithering his way to the basket.

This footwork by Jeremiah Robinson-Earl 👀 pic.twitter.com/HHvYEl4xm9

As a sophomore, he expanded on his game and opened the 2020–21 season with a brand new jump shot that was money, particularly in the early parts of the Wildcats’ campaign. The added mid-range game to his arsenal made him even more of a threat with the ball, flashing a shooting stroke with a nice high release point and the ability to knock down shots off the dribble or in face-up situations.

Overall, he’s got a nice soft touch and a smooth release from the mid-range. It’s fun watching him go to work down low or shake off an opponent.

Here’s Jeremiah Robinson-Earl’s first basket. He’s indeed a threat in the midrange. One of the several areas of his game that’s polished. Don’t let him get hot from midrange. pic.twitter.com/aEEEAYG2HW

Versatility/mental aspects of the game: Villanova has a reputation for developing disciplined and high-I.Q. players, and Robinson-Earl is no different. However, he already demonstrated great knowledge and understanding of the game from day one and has only evolved throughout his two years.

The Wildcats dealt with limited frontcourt depth during his time there, resulting in Robinson-Earl taking on lots of responsibility and minutes from the get-go. He proved to be up to the challenge and only seemed to grow as a more dynamic all-around player as time went on.

He’s able to get great positioning on the court, which helps out defensively and when it comes to rebounding. Robinson-Earl is a solid passer out of the low block as well and has great overall court vision, whether he’s sending a nice outlet in transition or hitting an open man at the three-point line. He’s unselfish and has a knack for making the right play.

Once Villanova’s star point guard Collin Gillespie went down late in the 2020–21 season, Robinson-Earl took on a point-forward role and looked comfortable dribbling, slashing, and facilitating, showcasing a new dimension of his game that hadn’t been shown before. He dealt with turnover issues his freshman year, but he cut down on his giveaways and cleaned things up as a sophomore.

His versatility also carries over to the defensive end of the game, where he’s been matched up against a variety of opponents and has held up against guards, forwards, and centers. He’s even active off the ball and has great awareness, which isn’t commonly seen in 20-year-old big men.

Rebounding: It goes hand-and-hand with an earlier point about his excellent positioning on the court, but he also has a motor that never stops. Even as a somewhat undersized center, he’s able to compete, fight, and create second-chance opportunities or pile up defensive rebounds.

His effort on the boards never diminished, even on cold-shooting nights. It’s an area of the game he prides himself in and has succeeded in ever since he first suited up at the college level. Robinson-Earl’s work on the boards was integral to the Wildcats’ success, especially when he singlehandedly held things down in the frontcourt at various points of the season.

He became just the fifth Wildcat to average more than nine rebounds per game since 1973 during his freshman season. His aggressiveness in this facet of the game was apparent from day one and has only persisted ever since.

This is the 10th rebound for Jeremiah Robinson-Earl. What a dominant night for him recording the double-double. One of America’s top players.

Oh, and look at the playmaking on this play. pic.twitter.com/BGWEEPMhd8

Three-point shot: While Jeremiah Robinson-Earl has a nice shooting stroke from mid-range and an excellent touch around the basket, his three-point shot is very much still a work in progress.

He’s certainly shown that he’s capable of making threes, even going a perfect 5-for-5 from deep in Villanova’s February 10th win over Marquette, but he’s far from consistent. This past season, his three-point shooting percentage dropped from 32.8% his freshman year to just 28.0% as a sophomore.

It seems like everyone needs to be able to shoot the ball in today’s NBA, and developing a more consistent shot from long range would add to his appeal and value on the court. Extending his range out to the perimeter is definitely one of his biggest areas for improvement moving forward and with the NBA three-point line even further back compared to the college level, it will take some time. He has stretch big potential, but NBA coaches will need to tap into that and refine this part of his game.

Limited athleticism: His motor and feel for the game made up for some of his athletic and physical deficiencies, but when you go up against a higher level of talent and the NBA’s quicker pace of play, that can only make up for so much. He doesn’t have stellar length or explosiveness, either.

While he was a solid defender in college, he wasn’t exactly a great rim protector and that might be in part to his size. Also, Villanova’s switch-heavy defense put him in situations where he was put against a smaller and quicker opponent. Although he could hold his own at times, there were other moments where he was just a step behind his man and got burnt to the basket.

In fairness to Robinson-Earl, he was deployed as Villanova’s 5-man and center, while he naturally projects as a 4 or even a combo-forward at the next level.

Robinson-Earl is an interesting prospect. Depending on which mock draft you look at and the time of publication, his range seems to go anywhere from mid-first round to late-second round.

The more realistic projection seems to be the early second round, with a chance he can squeeze his way into the late portion of the first round if a team likes him enough.

His high I.Q. and discipline, combined with scoring and rebounding ability, make him a pretty safe pick as someone who can bolster frontcourt depth starting out. If he can unlock his shot and extend his range, then we can be looking at more of a valued contributor at the NBA level.

As for potential fit with the Knicks, this may not be the greatest match for both sides.

Although Robinson-Earl has had some experience playing at the Garden and the Knicks have four picks to work with, New York has higher priority needs at other positions. Point guard and wing come to mind.

Added frontcourt could be nice, but would Tom Thibodeau dare cut down on Julius Randle minutes to give other guys a turn?! Besides, if the Knicks were to go with a frontcourt pick, they’d probably want to go with a more reliable rim protector or someone that already has stretch big capabilities to start.

Robinson-Earl should be able to find a niche in the NBA, but he’ll likely fit in better someplace else.

»READ: Cameron Thomas could be a much-needed offensive spark plug for the Knicks