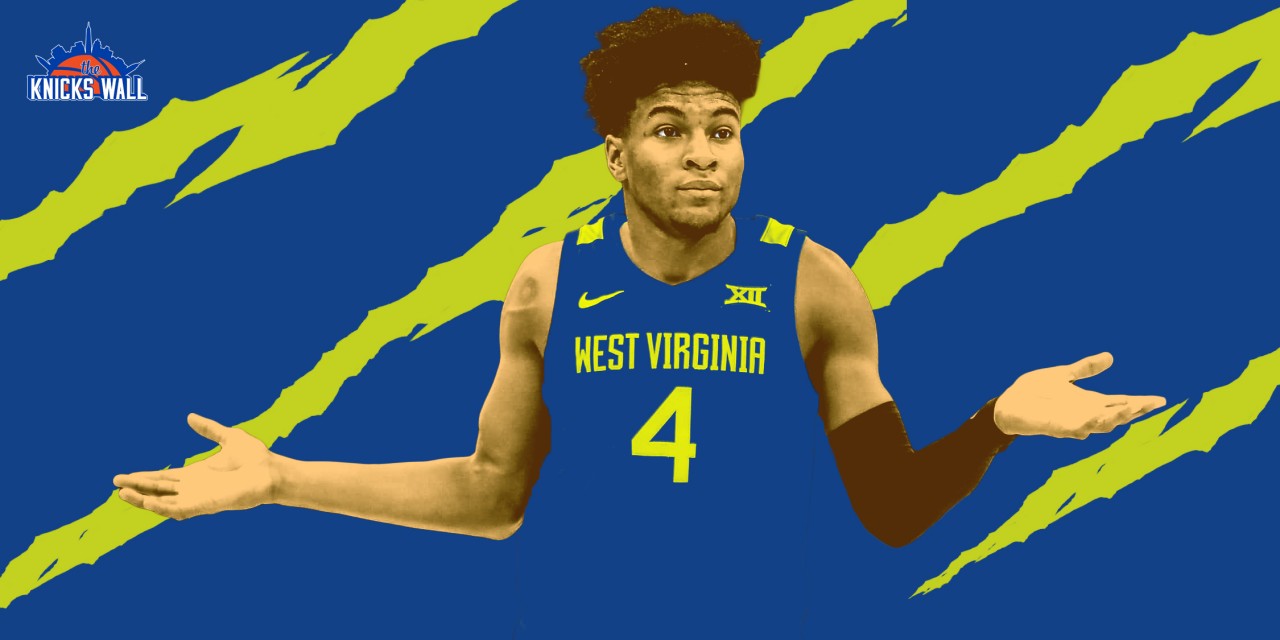 West Virginia’s Deuce McBride offers pest-like defense with sharpshooting and shot-making. The Knicks should keep an eye on him during the draft process.

Miles “Deuce” McBride—a 20-year-old sophomore guard from West Virginia—is one of the best defensive prospects in the 2021 NBA Draft, should he choose to remain in the field. While the sophomore’s stock has been rising in the months since the Mountaineers’ second-round loss to Syracuse, there is still the possibility that he returns for his junior season.

As it stands, Deuce McBride is projected as a late first/early second-round draft pick. Having recently received an invite to the upcoming combine, it is likely that his performance there will impact his decision to remain in the draft pool.

McBride is a sturdy 6-foot-2, 200-pound guard that brings skill and tenacity to both sides of the ball. While most of the conversation surrounding the West Virginia prospect will be about his defense, there are many positives offensively as well.

As the leading scorer at West Virginia last season, McBride averaged 15.9 points a game on 43.1% shooting from the field, including 41.4% from beyond the arc on a healthy 3.8 attempts per game.

The biggest takeaway from McBride’s offensive game is his tough shot-making ability. He possesses a very quick first step and can stop on a dime, allowing him to get off his effective pull-up jumper quickly over defenders. While the Mountaineer prospect does tend to rely on the pull-up jumper too often at times, he is a proficient shot maker and a more-than-capable shooter with a defender in his face.

Although he has shown growth in his ability to command the offense this year for West Virginia, his playmaking is not always what you would like it to be from a player his size. While maintaining a similar usage rate from his freshman to sophomore year, McBride’s assist percentage increased a significant rate from 18% to 27%. However, this only manifested in a little over four assists a game, along with an increase of two turnovers per game.

Deuce McBride saw me criticize his playmaking. Love the pace here. Burst at the perfect time to draw help, nice dump off pic.twitter.com/Oe8BNCDx7Y

Plays like the one above are what NBA teams will want to see more of from McBride. However, given a more concise role, Deuce could be able to help any team offensively with an extremely efficient scoring ability. Along with the pull-up jumper, he has a fantastic ability to create space for himself. These offensive weapons make him a serviceable guard prospect on the offensive side of the ball.

Another weapon in McBride’s offensive arsenal stems from his defense. As someone who creates a high number of turnovers on defense, he can initiate instant offense for himself and others on fast breaks. Due to his strength, McBride is a strong finisher in transition and it adds another dimension to his game.

McBride shows highly impressive offensive flashes, but his defense is what is going to draw attention to him as a prospect. The West Virginia guard was one of the best defenders in college basketball over his two years in Morgantown.

One of the more impressive aspects of McBride’s game is that is an extremely active and engaged defender with elite defensive instincts and awareness. This leads to highly active off-ball defense and a propensity for denying passes and cutting off passing lanes. While his activity off the ball can make him vulnerable to backdoor cuts, his recovery speed and reaction time allow him to recover and contest shots at a high level.

The young guard’s shot-blocking is a proficient skill for someone his size, mostly a result of his instincts and timing. Rotational help defense is an absolute strength with remarkable rotations and anticipation. While this does sometimes result in defensive risk-taking, often it is going to lead to positive defensive plays and getting his hand on the ball.

Then Deuce McBride saves this game with an unreal rotation, anticipation+timing on the block: pic.twitter.com/niIJT4s2a1

McBride is a smart team defender and does a great job cutting off drives and staying in front of his man. With an impressive lateral quickness, this is a skill that you can expect to translate to the next level. His point of attack defense is impressive to watch and exhausting to play against. You can see a level of frustration from opposing guards due to the intensity of McBride’s defense and his ability to stay with them.

McBride will almost definitely be a good defender at the NBA level. It is just a matter of how high his defensive ceiling can be. His point-of-attack defense, ball denial, and team defense skills make him a candidate to be an elite guard defender at the next level. This is a player that is built to make opposing guards miserable with extreme activity on defense and will make himself known because of that activity leading to blocks, steals, deflections, and denials.

McBride is a player that should be around towards the end of the first or the beginning of the second round should the Knicks be interested—and they should indeed be interested. Given the skills that McBride could provide for the team, he is an absolute dream of a player for newly crowned Coach of the Year Tom Thibodeau to bring in and get immediate contributions. His shot-making and offensive efficiency, along with his incredibly high defensive potential, make him a very intriguing guard prospect.

We talked about this Miles McBride play on @Prep2ProPod today, one of the greatest displays of transition defense I've seen, stunting at the ball and tracking back to break up the lob: pic.twitter.com/tkOHJU5lHs

Every Knicks fan would love getting the chance to watch McBride play defense given the opportunity.