Could Oregon’s Chris Duarte Be the Most NBA-Ready Prospect? 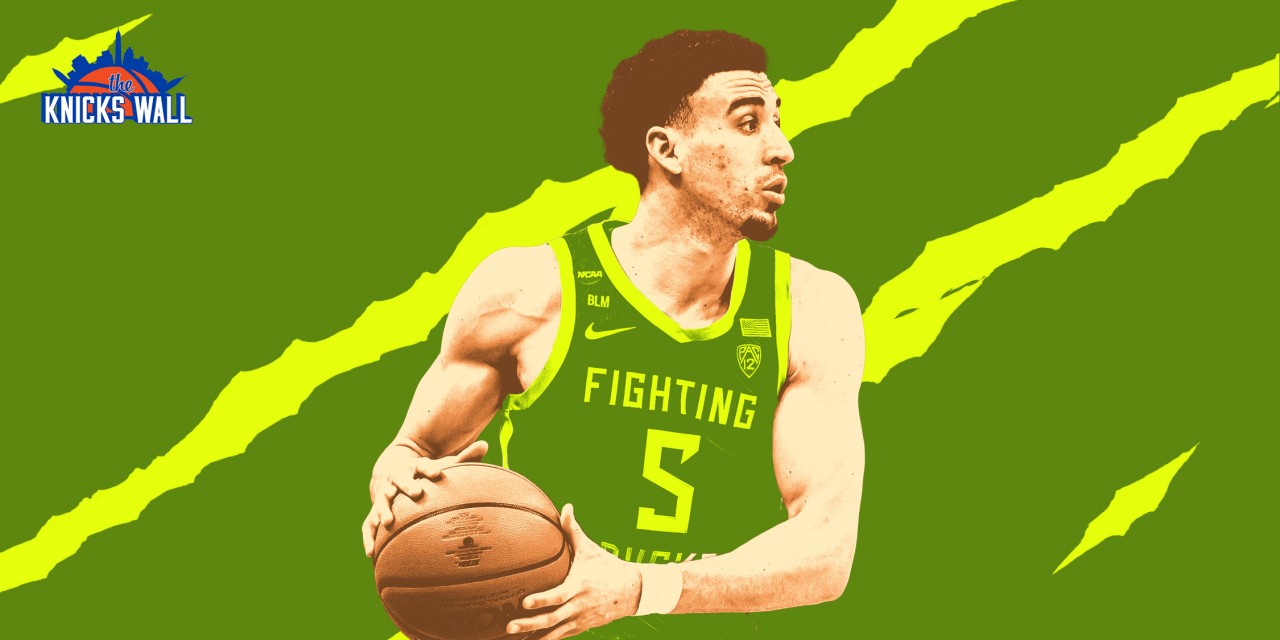 As a four-year college player, Chris Duarte brings a rare trove of experience that could make him a day one NBA talent.

While most NBA first-round draftees are first or second-year players with a world of potential behind their names, there are always a few seniors that NBA scouts may look to bring in because of their refined skill sets and ability to immediately join a team as a willing role player.

One of those seniors in this year’s class is Chris Duarte, a 23-year-old wing whose collegiate career began in JUCO at Northwest Florida State and saw him transfer to Oregon for his junior and senior years. As a projected mid-to-late first-round pick, he is definitely someone the Knicks should have on their radar as they look to field a polished roster for another potential playoff push.

Upon transferring to Oregon for the 2019–20 season, Duarte started in all 28 games he played and immediately made his impact felt on the court. He averaged 12.9 points and 5.6 rebounds per game, both good for second-best on the team. He also led the team in steals and ranked fourth in the Pac-12 at 1.7 steals per game, all while securing an All-Pac-12 Honorable Mention and Pac-12 All-Defensive Honorable Mention.

He really showed his worth as an NBA prospect in his senior year, though, as Duarte took nearly every Pac-12 award out of the building with him: Pac-12 Player of the Year, All-Pac-12 First Team, and Pac-12 All-Defensive Team. He led the Ducks with 17.1 points per game and took them through to the Sweet 16 in the NCAA Tournament as a seven-seed, commanding them through an upset against two-seed Iowa.

Duarte excels in several areas offensively, but he is especially great as a knockdown shooter. Across 26 games in his senior season, he shot 53.2% from the field and 42.4% from three-point range. Nearly half of his shot attempts that season came from behind the arc, as he took 5.5 of his 11.6 shots per game from there. He’s effective shooting in the field off the dribble and in catch-and-shoot scenarios. He’s also great at scoring off movement, using screens to get away from defenders to create open shots.

Duarte was also one of the elite pull-up shooters in CBB. Just a very, very good shooter in all aspects. pic.twitter.com/UnxAN7g9SY

Duarte is also crafty when it comes to getting to the rim to score. With a 6’6” frame and 190-pound build, he’s got above-average size for a guard and is able to use contact to barrel to the basket. With a rather ambidextrous touch in the paint, he’s got the ability to size defenders left or right and finish on either side of the basket. Although he finished most of these touches, he does struggle with getting to the free throw line. He only took three free-throw attempts per game in his senior season but did make 81% of them.

While Duarte is great at scoring with the ball in his hands, he’s by no means a playmaker. He averaged 2.7 assists to a paltry 2.3 turnovers per game last season. Once he gets trapped by a defender, he may be forced to hoist bad shots up at the NBA level without the help of a screen. He is willing as a rebounder at his position, though, as he had nearly five per game.

Most importantly, especially on a Tom Thibodeau-driven team, Duarte absolutely thrives on the defensive end. He led Oregon with 49 steals and 21 blocks in his senior year. He’s incredibly active in passing lanes and uses his long arms to poke at the ball to create deflections. Oftentimes, he’ll read the offense like a free safety and turn a steal into an easy breakaway basket.

The most obvious red flag about Duarte is his age. At 24 years old come draft night, it’s very hard to say he will be able to improve upon any part of the game he’s already crafted. Teams won’t view him as an asset they can give water and grow for years while honing in on his potential, but rather as someone who will have to be good immediately or question his spot in the league. If he can’t succeed within the first two years of his career, he’ll already be on the wrong side of his 20s.

Perhaps fortunately for him, the Knicks happen to be in a position where someone of his particular skill set and situation might work. As the postseason showed, the Knicks are in dire need of shooters whom Julius Randle can pass to off double teams. As an excellent three-point and spot-up shooter, Duarte is someone that can fill that role. This especially rings true in an offseason where the Knicks could be losing Derrick Rose, Reggie Bullock, and Alec Burks.

Rolling around with bigs like Mitchell Robinson and Nerlens Noel (if re-signed) too, Duarte can use their screens to get open shots or use his size to go around screens and draw contact at the rim. Even though his passing skills are inadequate, the Knicks could just hone in on Duarte’s strengths and use him as a scoring guard. With Luca Vildoza and maybe other free-agency signings looming, the team may not need to worry about using Duarte’s draft spot for a primary playmaker anyway.

And when it comes to defense, Tom Thibodeau ought to fall in love right away with Duarte’s intensity and hustle on that end of the floor. Duarte could be trusted to enter games and study the opposing team’s offensive schemes, turning at least a few of them into steals and easy baskets.

Even though Duarte’s age might be a question mark when it comes to his longevity as an NBA player, it speaks to the experience he has compared to most others in his class. He’ll fight through the same criticism as other four-year college players like Damian Lillard and Malcolm Brogdon, two players Knicks fans would be overjoyed to have on the team right now.

»READ: Moses Moody and the allure of 3-and-D prospects

»READ: Cameron Thomas could be a much-needed offensive spark plug for the Knicks