Analyzing Jaden Ivey’s Game and Potential Fit With the Knicks 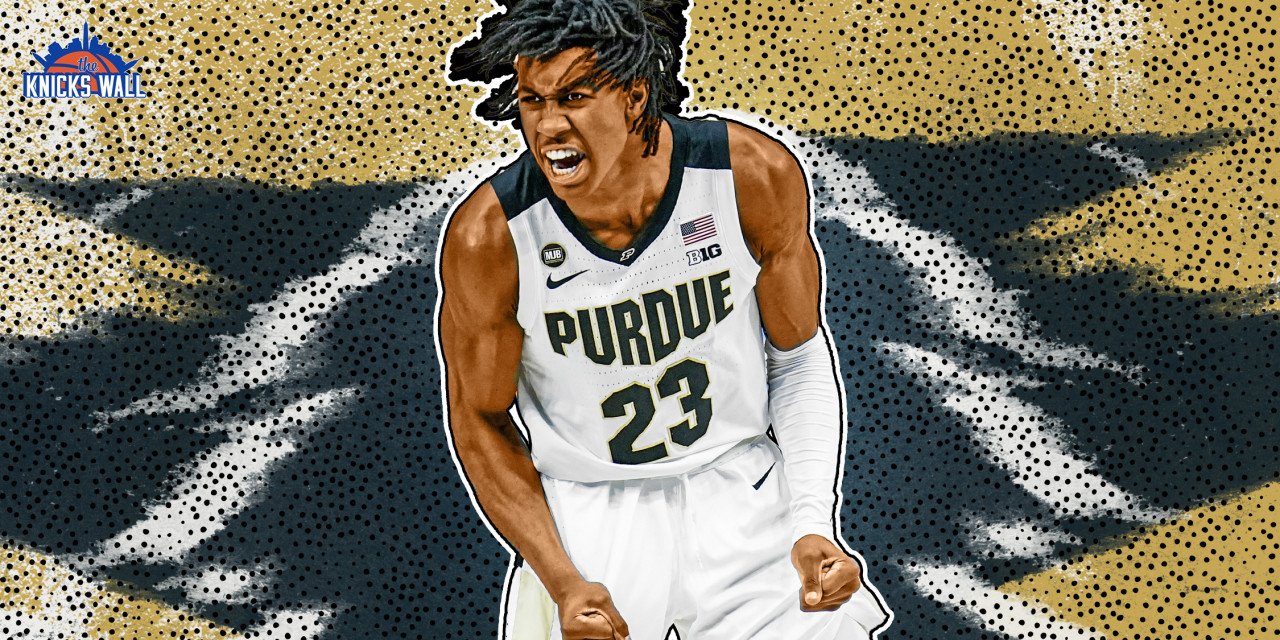 Jaden Ivey had a great season at Purdue. What would the exciting NBA draft prospect look like on the Knicks next season?

Jaden Ivey burst onto the scene this past season as a sophomore with the Purdue Boilermakers. The 20-year-old native of South Bend, Indiana, firmly established himself as one of the best players in college basketball, averaging 17.3 points, 4.9 rebounds, and 3.1 assists this season, while leading the Boilermakers to a 29-8 record and a Sweet Sixteen appearance.

Ivey comes from an athletic family. His mother, Niele, played in the WNBA for five seasons and his father, Javin, spent time in the NFL. Niele is currently the women’s head coach of her alma mater, Notre Dame, and has been an integral part of Jaden’s success, raising him as a single mother. Both Iveys appeared in the Sweet Sixteen of the men’s and women’s NCAA tournaments this season, making for one of the most heartwarming and cool stories in sports.

Ivey grew up as a multi-sport athlete and began his high-level basketball career at Marian High School in Indiana and transferred to La Lumiere School, a national basketball powerhouse for his senior season. Ivey averaged 15.4 points per game in his senior season, per Max Preps, and was a four-star recruit and the 84th ranked player in the class of 2020 in the ESPN 100. He ultimately decided to attend Purdue over other Indiana programs Notre Dame and Butler.

Ivey, after a Big Ten All-Freshman Team Selection in his first year in college, took a huge leap in his sophomore season and earned second-team All -American honors while boosting his NBA draft stock exponentially. The Knicks should keep an eye on him throughout the NBA draft cycle.

At 6-foot-4 with a 6-foot-8 wingspan, Jaden Ivey has good size and strength for the shooting guard position. That, coupled with his elite-level athleticism and motor, gives you one of the most sought-after draft prospects in this 2022 class, especially among guards. Despite some inconsistencies and propensity for mistakes, Ivey always gives maximum effort on both ends of the floor and can take over a game at a moment’s notice.

The development of the outside shot this year for Jaden Ivey was awesome…no denying that.

Still just drooling over his ability to weave through traffic. Additional spacing at NBA should make him even more dangerous. Multiple "turbo buttons" off the bounce #NBADraft pic.twitter.com/1xfh9u0O69

From his first year at Purdue to his second, Ivey improved in points, rebounds, assists, and shooting percentages, which is a referendum on the work he is willing to put in to get better.

Ivey is also an above-average distributor for a shooting guard, as he can use his quick burst to get into the lane and find the open shooter or big. When not dishing the ball, Ivey has the physicality to finish at the rim with authority and isn’t afraid to challenge larger guys in the paint.

By all accounts, Ivey is also a very good teammate, extremely gracious, and seamlessly transitioned into a leadership role in his sophomore season. Notably, after a rough upset loss in the 2021 NCAA tournament to 13-seed North Texas to conclude his freshman year, Ivey immediately got back to work and set the tone for the following season, getting guys in the gym and showing his true love of the game and willingness to win. A lot to love here.

Jaden Ivey: “I’m getting in the gym in the next couple days and I’m bringing the guys with me. We’re gonna stay positive and this offseason is gonna be huge for us.”

Ivey plays the game with a tremendous amount of intensity and juice. While this is mostly a good thing, this also has led to some out-of-control and inconsistent play. When his shot isn’t falling, Ivey sometimes tries to force the issue, which has led to turnovers and silly fouls on both ends of the floor. This isn’t a rarity for a basketball player of his age and, as he gains more experience, he can become a more a level and less risk-averse player.

Ivey is also an average ball-handler and doesn’t really have much of a mid-range game, which has limited him offensively if his outside shot isn’t falling. Ivey improved his three-point percentage by 10% from his freshman to sophomore year, but it is still a work in progress from behind the arc.

In Purdue’s most important game of the season, Ivey struggled mightily in the Sweet Sixteen matchup against a less-talented Saint Peter’s squad. Ivey turned the ball over six times and only scored nine points, his second-lowest scoring output of the season, per ESPN Stats. Not exactly the type of performance you want to have on the last game tape of your college career, but this should not be indicative of future production or potential.

It is also important to note that Purdue, under head coach Matt Painter, runs very methodical and slower-paced offensive sets, which aren’t always conducive to players like Ivey who thrive when they are able to be unleashed. The Boilermakers, according to KenPom.com, ranked 237th in Division I last year in adjusted tempo rating. A lot of Ivey’s college shortcomings could be resolved, or at least improved upon, by simply being in a more fast-paced and open game, which the NBA is compared to college ball.

Again, all of these flaws are correctable for sure and Ivey has the talent and willingness to improve and become a much more well-rounded offensive threat in the NBA.

A high-end comparison for Ivey is 2020 no. 1 overall pick Anthony Edwards. Like Edwards, Ivey is extremely athletic, explosive, and has some questions about his shooting and on-court decision-making coming out of college. In their final seasons of college, Ivey was a much better three-point shooter at 35.8% than Edwards, who only shot 29.4%, per Sports- Reference.

Edwards at 6-foot-5 and 225 pounds is about 25-30 pounds heavier than Ivey and is more filled out with a more ideal NBA frame; however, Ivey does have good size for the shooting guard position. Ivey in the right situation can have a similar galvanizing impact like we’ve seen Edwards have with the perpetually subpar Minnesota Timberwolves.

More realistically, Ivey could shake out to be a more offensively potent version of Marcus Smart. Smart has carved out a nice niche in Boston and has established himself as one of the most reliable perimeter defenders in the Association, winning Defensive Player of the Year honors last night. Ivey and Smart share an unteachable amount of passion for the game and Ivey has shown quick hands and more importantly willingness to grind on the defensive end of the floor, similar to Smart. In my opinion, Ivey’s offensive repertoire, smoothness, and upside are greater than Smart’s.

With the Knicks locking up the 11th-best odds to win the lottery, combined with their poor luck with the ping-pong balls, it is unlikely New York will be in a position to draft Ivey, barring a trade or some divine intervention.

Rightfully so, Ivey has consistently found himself in the top five of almost all mock drafts, among other big-time prospects like Paolo Banchero, Chet Holmgren, and Jabari Smith. It is pretty safe to say that Ivey is the best shooting guard available in this year’s NBA draft and with the league becoming more and more guard-centric by the year, it is almost guaranteed that Ivey will be snatched up early by a team like the Thunder, Magic, or Rockets.

Unfortunately for the ‘Bockers, Ivey would be a really good fit here in New York and could immediately infuse the Knicks with energy and offensive production that has held them back in recent years. A young core of Ivey, RJ Barrett, Quentin Grimes, Obi Toppin, Immanuel Quickley, and Mitchell Robinson would be an incredible sight. With Leon Rose proven to do a lot of wheeling and dealing on draft day, we can only hope he makes a power move to get Jaden Ivey on the team in the 2022 NBA Draft.

»READ: Could the Knicks use a shooter like NBA draft’s AJ Griffin?