Chet Holmgren Is the Unicorn of the 2022 NBA Draft 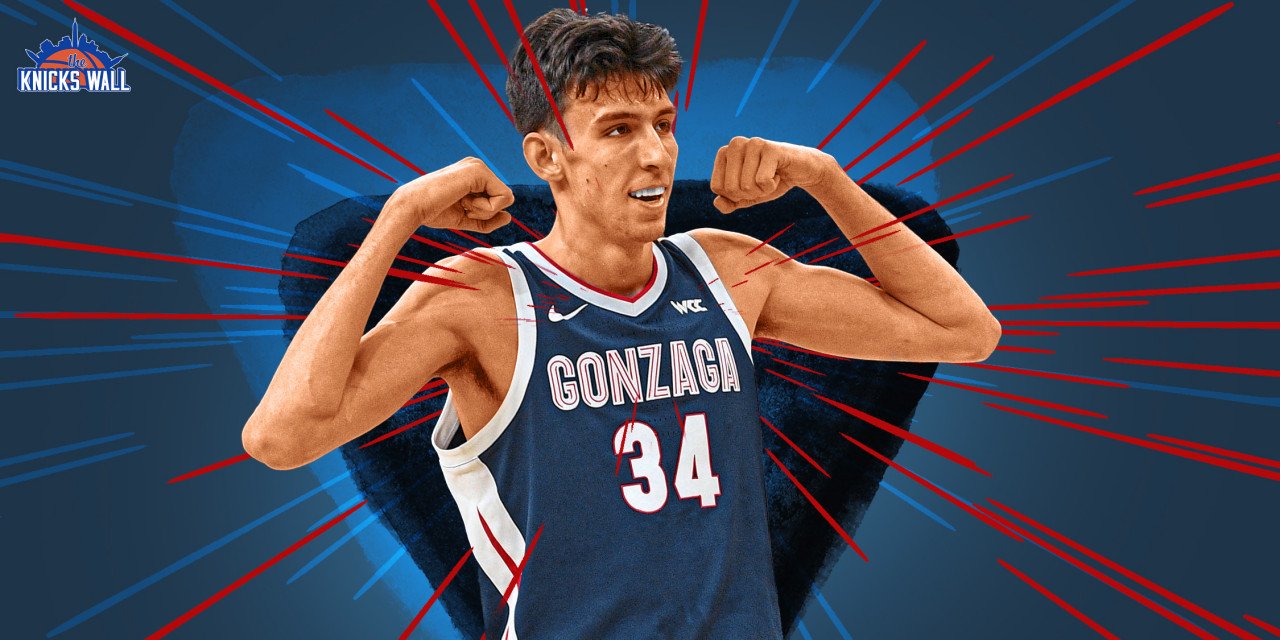 Chet Holmgren is a unique talent who has been in the spotlight for years. Could he be a trade-up target for the Knicks?

Chet Holmgren has been an internet sensation for a few years now, due to his guard-like abilities as a seven-footer. The 20-year-old Minneapolis, Minnesota, native grew up playing basketball under the tutelage of his father, Dave, a seven-footer himself and a former student-athlete for the Minnesota Golden Gophers.

Holmgren spent his entire high school career at Minnehaha Academy in Minneapolis, playing alongside former Gonzaga Bulldog and Orlando Magic guard Jalen Suggs. Holmgren averaged a ridiculous 21.0 points and 12.3 rebounds his senior year, leading Minnehaha to a state title while winning Gatorade National Player of the Year and Minnesota Mr. Basketball, among other awards, via GoZagsSports.com.

Coming out of high school, Holmgren was a five-star recruit ranked number one in the class of 2021 ESPN 100. Holmgren ultimately decided to attend Gonzaga under the steady stewardship of Mark Few. An obvious one-and-done prospect, Holmgren averaged an impressive stat-line of 14.1 points on 60.7% shooting from the field, 9.9 rebounds, and 3.7 blocks, per Sports-Reference.

Gonzaga’s season ultimately ended sooner than they would have hoped in an upset Sweet Sixteen loss to the Arkansas Razorbacks. However, it was an insanely successful season for Holmgren individually, as he took home WCC Defensive Player of the Year and earned second-team All-American honors. He would be a fantastic addition to the New York Knicks, though getting the chance to land him is not at all a likelihood.

Where do we begin here? Simply put, Chet Holmgren is one of the most complete and unique draft prospects we’ve seen in a long time. Despite his height, he is a great ball-handler and shooter and runs the floor and plays the game like a shooting guard. Holmgren also rebounds as well as you would expect from a seven-footer and averaged an astounding 3.7 blocks per game in his lone season as a Gonzaga Bulldog, per Sports-Reference.

Holmgren has been in the spotlight since his time in high school, going viral on many occasions for his incredible skills for someone his size. In Spokane, Holmgren played the game with an immense amount of confidence and intensity but was never cocky or full of himself. He is not a ball-stopper when he has the rock and is extremely creative and selfless, having the ability to see over the top of defenses to pass or shoot over the top of smaller perimeter players. Holmgren is an ideal stretch 4 who impacts the game on both ends of the floor.

Despite appearing a bit awkward in his movements, Holmgren is a plus athlete who possesses quick feet and deceptive speed. Combine this with his size and his high motor, you have one of the most coveted prospects we’ve seen in a while.

Box office appeal is something that Holmgren brings along as well, mostly because we haven’t seen many big men do what he can do. In my opinion, this kid was must-see TV on an otherwise run-of-the-mill and sometimes uneventful Gonzaga basketball program, despite their sustained success. If in the right market, Holmgren could pop immediately in terms of the ability to sell tickets.

The main red flag surrounding Holmgren is his slender build and lack of strength. At seven-foot and 195 pounds, Holmgren is extremely frail, which raises concerns about his ability to stay healthy, longevity, and ability to compete against stronger and more physical players in the Association. By no means is Holmgren soft—it would just behoove him to put on some muscle/weight in general.

Oftentimes, we see guys this tall and this skinny succumb to frequent or sometimes serious lower-body injuries like Kevin Durant (Achilles) and Kristaps Porzingis (ACL) because it is pretty unnatural to be that tall, and getting hurt could be even more likely without any meat on the bones. Despite this concern, Holmgren just turned 20 on May 1st and has some time to work on his body and become more of a physical specimen.

In Gonzaga’s second-round NCAA tournament game against fellow projected lottery pick Jalen Duren and Memphis, Holmgren’s lack of physicality was on display and Duren bodied the young man on multiple occasions. Duren didn’t perform well offensively that game due to Holmgren’s outstanding defense but did a great job exposing Holmgren, who only scored nine points. Duren stands at 6-foot-11 and 250 pounds and physically reflects a lot of guys who will be guarding Holmgren in the NBA. Although one game, Holmgren’s one main weakness was on display.

Other than his frame, which could present some issues in the NBA, any other criticism of Holmgren seems like nitpicking. One thing about the big man that could be considered a weakness is that I don’t think he realizes how good he can be. While watching Chet throughout his one season at Gonzaga, he seems unselfish to a fault at times. You almost feel he could have scored/shot the ball more this past year, averaging a respectable 14.1 points, while only shooting the ball 8.8 times per night, per Sports-Reference. To be fair, Holmgren was surrounded by many other talented players/potential NBA draft picks like Drew Timme and Andrew Nembhard. Still, Holmgren could’ve shot the ball more and filled up his offensive box score more than he did.

We’ve heard Durant’s name thrown around when speaking about Chet Holmgren, but let’s pump the breaks on that. Understandably, KD and Chet get compared, primarily due to their slender frames and ability to stretch the floor, playing the game like seven-foot guards. Despite this, Durant is a once-in-a-generation talent, who is rightfully regarded as a top-10 scorer of all time. Comparing someone to Durant, especially someone who hasn’t played an NBA game yet and one season of college ball is a bit much. Don’t get me wrong, Holmgren is a supreme talent who has incredible potential, but to me, KD’s game is and was much more silky-smooth and was a more complete prospect coming out of Texas in terms of an offensive ceiling.

I liken Holmgren’s game to more of a Dirk Nowitzki lite; a bit more laborious and awkward, but super effective and, at times, unguardable. Holmgren to me is more athletic, possesses better handles, and will be a much better defensive player than Dirk ever was in the NBA and has the skill to be on Dirk’s level as a scorer, assuming he stays healthy and finds himself in the right situation.

Even with the Knicks needing a point guard and shooting guard much more than a stretch 4, Holmgren’s talent would be too much to pass up if the Knicks had the chance to select him. I understand the most recent experiment with a seven-foot stretch 4 in Kristaps Porzingis didn’t go very well for the Knicks, however, I think Chet is in a different stratosphere in terms of his ability to shoot, dribble, block shots, and unselfishness.

Unfortunately, with the Knicks locking up the 11th-best odds to win the NBA draft lottery, combined with their poor luck with the ping-pong balls, it is unlikely New York will be in a position to draft Holmgren. We can fantasize about the length and shot-blocking ability he and Mitchell Robinson could provide among other things, but Holmgren is one of the few franchise-changing, unicorn-type players that we see every so often. I would be shocked if Chet Holmgren isn’t the first or second name we hear in the June draft.