Could the Knicks Use a Shooter Like NBA Draft’s AJ Griffin? 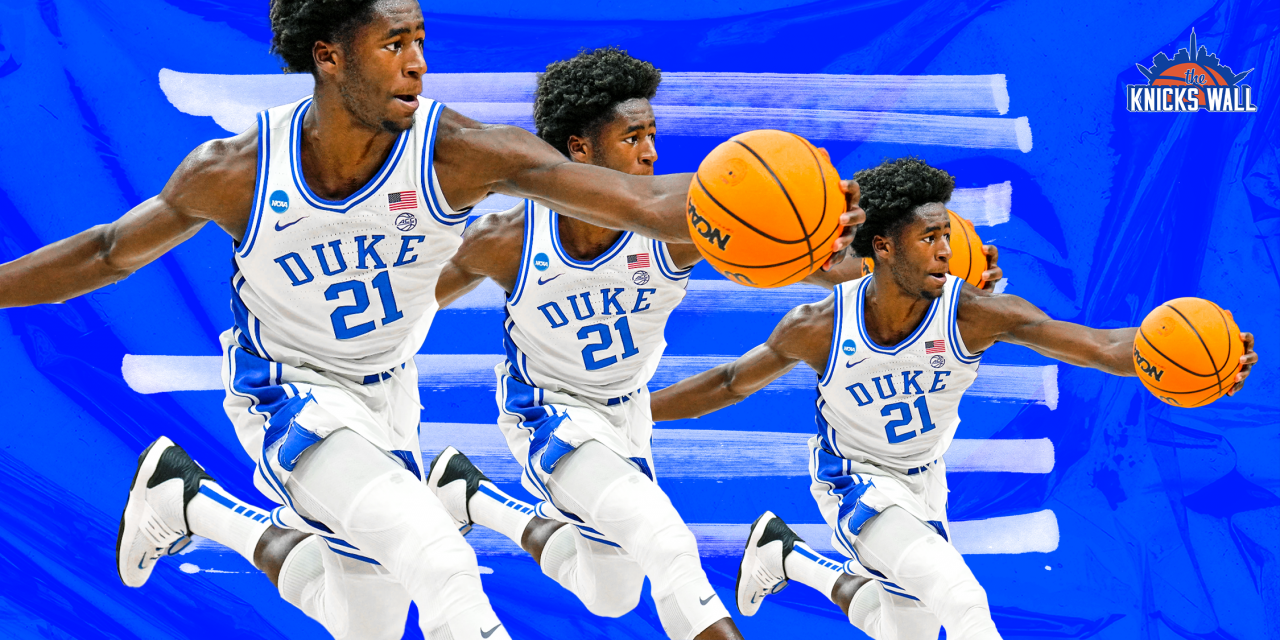 Fresh off a Final Four appearance with Duke, AJ Griffin has the shooting skills to make himself a worthy lottery draft pick.

Well, it’s that time again. After an inspired playoff run last year, the New York Knicks fell back down to the status quo this season and find themselves watching to see if the ping-pong balls net them a favorable pick in this summer’s upcoming NBA Draft. The Knicks are currently projected to pick at 12, but some luck on lottery night could change everything.

One player that should be in the conversation regardless of what pick the team ends up with is AJ Griffin, the freshman wing out of Duke. Griffin, along with teammates Paolo Banchero, Mark Williams, and Wendell Moore Jr., led Duke to a Final Four berth in this year’s NCAA tournament and are all currently projected to be taken in the first round of this year’s draft.

AJ Griffin showed what makes him special offensively and a likely top 10 pick, flashing his elite shot-making inside and outside the arc, and getting downhill impressively several times. Finished with 18 points in a win over Arkansas, helping Duke return to the Final Four. pic.twitter.com/S1RjoA8CN8

Griffin was the most prolific shooter of that group on their postseason run, as he shot a whopping 44.7% from three-point range on over four attempts per game throughout the season. That percentage puts him within the top 20 in the nation in three-point shooting in the 2021–22 campaign.

A question the Knicks need to ponder with Griffin, though, is if another shooter is what they need right now. The team prioritized three-point shooting last offseason by signing Evan Fournier who went on to set the Knicks’ single-season record for three-pointers. Aside from him, the Knicks currently have Immanuel Quickley and Quentin Grimes coming off the bench in similar roles. There is also Cam Reddish, who if the Knicks decide to keep in their plans for next season, has taken over four three-pointers per game in his NBA career.

The Knicks made it a point last offseason to have three-pointers be a more focal part of their gameplan, and they did just that. The team went from just 30 three-pointers attempted last season, a bottom-four number in the league, to 36.9 this one, putting them in the back end of the top 10. With the Knicks having already worked themselves into the league’s upper echelon in that category, it’s tough to say that skill set is something they’d look for in the draft when they have other needs.

However, the 18-year-old Griffin has a bit else to offer in his bag of tricks. He also shoots the rock well inside the arc at 54.7% on his two-point attempts. This season at Duke, he’s shown he can use his 6’6” 220-pound frame to back down defenders and create scoring opportunities for himself. He’s a proven ball-handler who can use a variety of moves and fakes to get to the basket.

While passing would never be expected to be a fulcrum of his game, Griffin does excel in that category. He had the lowest turnover percentage in the ACC last year at just 7.2% and averaged only 0.6 turnovers per game. He does a great job of finding cutting teammates, which he had plenty of in size with Banchero and Williams. This is something that could translate well with rim-rolling bigs in New York like Mitchell Robinson and Jericho Sims.

The biggest red flag with Griffin, though, is his lengthy injury history. Separate knee and ankle injuries kept him away from nearly two years of high school basketball. He was slowly worked into Duke’s rotation this season, not seeing regular playing time over 20 minutes per game until mid-December.

Pending whatever medical reports NBA scouts read about Griffin prior to the draft, his stock could fluctuate a fair bit. Furthermore, it’s worth wondering if his body would be able to handle the NBA workload even if healthy. With a more ramped-up play style against the world’s best basketball talent, Griffin’s body would be put to the test to lengths it’s never seen. However, he was able to make the adjustment to the college game fairly smoothly, so hopefully, doubts like that can be put to rest.

Really enjoyed talking with Duke freshman wing AJ Griffin in Durham. Here's a snippet from our Film Session. Impressive perspective for an 18-year-old: “Rent is due every day. You only get one life and I’m just trying to make the best out of it." pic.twitter.com/q9yBZLaRMn

Another negative about Griffin given his inexperience is his defense. He seems to often be a step behind and indecisive in one-on-one situations. While the effort is certainly there, he just makes a lot of the wrong decisions in on-ball moments that lead to baskets. If he can refine that with some injury-free stability to get himself right on that end of the floor, it can only add to his value. As one of the youngest players in the draft who will still be 18 come draft day, teams will have a lot of time to work out any kinks in Griffin’s game.

Regardless of that, though, it’s tough to say if Griffin is someone the Knicks should look to add to their current roster. As we mentioned, the Knicks have a bevy of three-point shooters on the team already, and Griffin would just be added to the end of that line of long-range wings. He does excel offensively, and while it would be great to add some firepower to a Knicks team that’s still in the bottom four in the league in points per game, there is a lot of potential that will require a few years of work before Griffin’s skillset is fully unleashed. And, of course, you have to hope his injuries from high school don’t come back to haunt him.

Even though the Knicks aren’t seeing the playoffs this year, it’s safe to say the team is still approaching the offseason with the mindset of a win-now team under head coach Tom Thibodeau. So, taking a flier on an 18-year old whose game needs a lot of refinement and whose current skills match a lot of what the team already has doesn’t make the most sense. The front office could certainly kick themselves three or four years down the line when he’s finally excelling on a team that’s taken the time to nurture him since draft day, but until then, the Knicks’ interests don’t exactly seem to align with Griffin at this time.

Welcome back to The Knicks Wall’s draft coverage! We’ll be writing about the 2022 NBA Draft at least twice a week from now until draft day, June 23rd. Follow along and be on the lookout for new pieces, podcasts, and live chats.