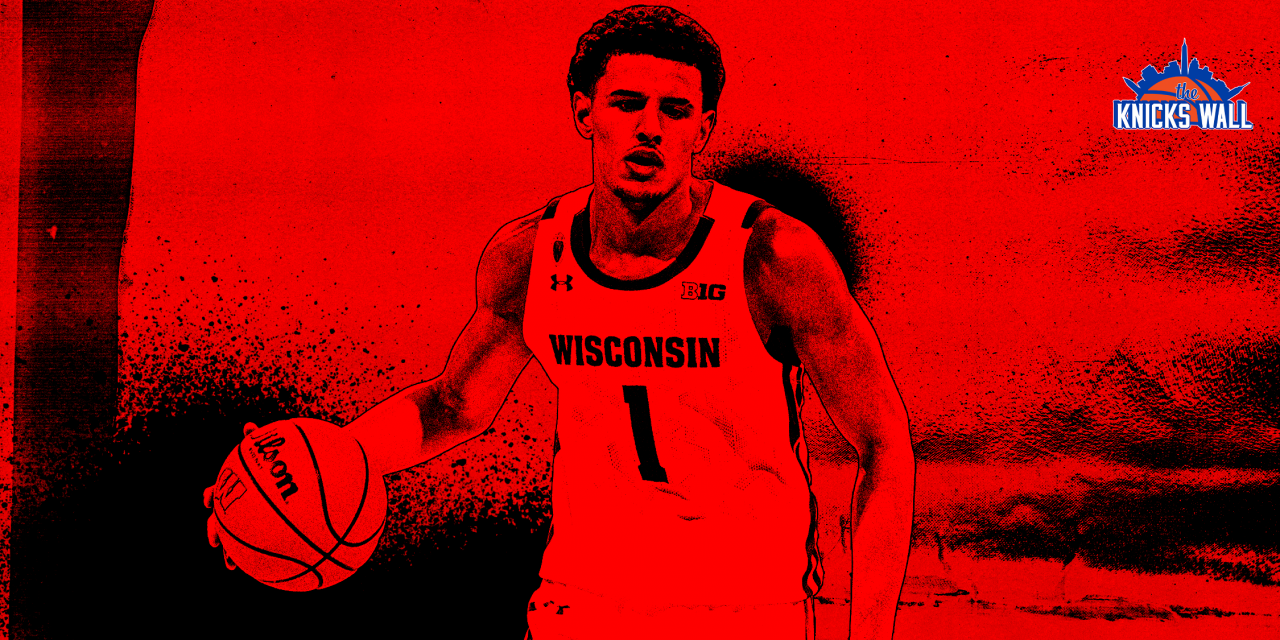 One of the best offensive players in the country, Johnny Davis could be an interesting adjustment to the NBA—and the Knicks.

20-year-old La Crosse, Wisconsin, native Johnny Davis is one of the more well-rounded guard prospects in this draft. Davis’ basketball journey began at La Crosse Central High School, where he spent four years, capped off by a Wisconsin Mr. Basketball selection to the tune of 27.4 points and 9.2 rebounds per game, per UWBadgers.com. Davis also played football in high school and was pretty good at it; considered the best quarterback in the state during his senior year. Davis comes from an athletic family, with his father Mark playing 13 seasons of professional basketball. His twin brother Jordan was a teammate of his at Wisconsin as well.

Despite the incredible accomplishments, the 6-foot-5 guard was not ranked in the 2020 ESPN 100. He ultimately decided to stay home and play for head coach Greg Gard and the Wisconsin Badgers, spurning offers from other local schools like Minnesota, Marquette, and Iowa. Davis’ two seasons at Wisconsin were night and day. In his freshman year, Davis averaged only 7.0 points and 4.1 rebounds per game but took a quantum leap to 19.7 points and 8.2 rebounds his sophomore year, per ESPN Stats. Davis earned Big Ten Player of the Year honors in 2022 and led Wisconsin to the Round of 32, with their season ending in a 54-49 upset loss to Iowa State.

One of the best offensive players in the country, Davis put himself on the map and his stock skyrocketed from a relative unknown to an anticipated lottery pick.

At 6’5” and 195 pounds, Davis has an NBA-ready frame, which is not always the case for 20-year-old projected lottery selections. More importantly, Davis has displayed great body control and knows how to maneuver to compensate for his lack of elite athleticism. Davis is also an adept scorer from all three levels, including the mid-range, which has become a lost art in today’s NBA. The three-point shooting could use some work, but this may very well be a confidence issue and not a lack of ability issue.

Watching Davis in his two seasons at Wisconsin, it was easy to spot his aggressive nature in terms of getting to his spot with and without the rock. However, he was not over-aggressive and you didn’t find him chucking up contested and low percentage shots or over-committing on the defensive end of the floor as well. Davis was also not afraid to mix it up and do the little things, like rebounding, averaging 8.2 boards his sophomore year.

Davis works extremely hard as well, as indicated by his massive improvement from his freshman to sophomore season, and commitment and drive will not be an issue wherever he ends up in the Association. A nagging ankle injury towards the end of the year could have been an easy out for Davis to just rest up for the draft, but he played through to the best of his ability, leading the Badgers to the Round of 32 in the NCAA tournament.

Overall, Johnny Davis is a sound player in each department and is a jack of all trades, master of none type of guy, which has its pros and cons, but it is not often to see a 20-year-old with well-rounded traits like we see from Davis.

Davis does a lot of things well on the basketball court; scoring, rebounding, defensive intensity, and decision-making. However, he doesn’t possess elite agility and quickness and could have trouble getting open against better and bigger athletes in the NBA. In college, Davis only shot the ball at a 30.6% clip from behind the arc and seemed tentative at times to pull the trigger from there. With Davis not having a super long wingspan and demonstrating trouble with separating, he could be a nonfactor in the three-point department more often than not.

There are also concerns that Davis’ incredible improvement in his sophomore season was somewhat of a flash in the pan and that he has already reached his ceiling. Davis doesn’t possess the upside of some other shooting guard counterparts in this draft, which is why he isn’t projected higher than eight in most mock drafts. Even though he is well-rounded, a lot of times teams like to take bigger swings on higher ceiling guys and not “safe picks” like Davis.

It is also worth noting that Davis was not very efficient towards the end of the season. He was a bit hobbled, only shooting 12-of-36 in two NCAA tournament games, including a 4-for-16 performance in an upset loss against Iowa State, per ESPN Stats.

Looking at Davis’ approach to the game, it is very similar to former Villanova Wildcat and current Portland Trail Blazer Josh Hart. Both Davis and Hart possess average explosiveness and more so have to rely on their basketball I.Q. and toughness rather than raw talent. Fluidity is not a term you would use to describe either of these guys’ games, but they work hard on each possession and have solid frames, both standing at 6’5” with wiry strength. Like Hart, I expect Johnny Davis to be a solid, low-end starter or sixth or seventh man on a good team.

Another current player that comes to mind when looking at Davis is Kentavious Caldwell-Pope. KCP was an integral part of the 2020 Lakers bubble championship, where he provided stifling perimeter defense and clutch shot-making throughout the playoffs. Caldwell-Pope was more of a natural scorer coming out of Georgia, but both are comparable in athleticism, build, and three-level scoring ability. Caldwell-Pope has hovered in that 11-to-14 point-per-game range throughout his career and Davis projects to be right in that area as well.

The Knicks have officially locked up the 11th overall selection in the 2022 NBA Draft and it remains to be seen what they will do with that pick. Trade up? Trade down? Stand pat? Nobody truly knows what the Knicks will do, but it might not make sense to add another young player to the fold to a team looking for a boost in the star department, especially since they likely won’t have the chance to select a premier prospect like Chet Holmgren, Paolo Banchero, or Jaden Ivey at that slot.

Given the timeline of the team, I’d say Leon Rose and co. will try to move no. 11 in pursuit of an established player to go along with the already solid young core of RJ Barrett, Quentin Grimes, Immanuel Quickley, and Obi Toppin.

However, if the Knicks do stay at 11, Johnny Davis would be a realistic option and there is reason to be happy if he is wearing orange and blue. As mentioned previously, Davis doesn’t exactly project to be a star who averages 20 points per game, but adding a shooting guard with very good offensive potential to the mix would make sense. Davis would be more of a rotational bench piece at first, especially if Tom Thibodeau is at the helm, but the Knicks need offense, and Davis has the savvy and skill to be a very valuable shooter/spark off of the bench. For what it’s worth, I like Davis more than other guys I’ve seen projected to the Knicks like AJ Griffin or Bennedict Mathurin, with Davis being more consistent and NBA-ready despite maybe not being as gifted as Griffin or Mathurin.

»READ: Shaedon Sharpe is the biggest home run swing in the 2022 draft