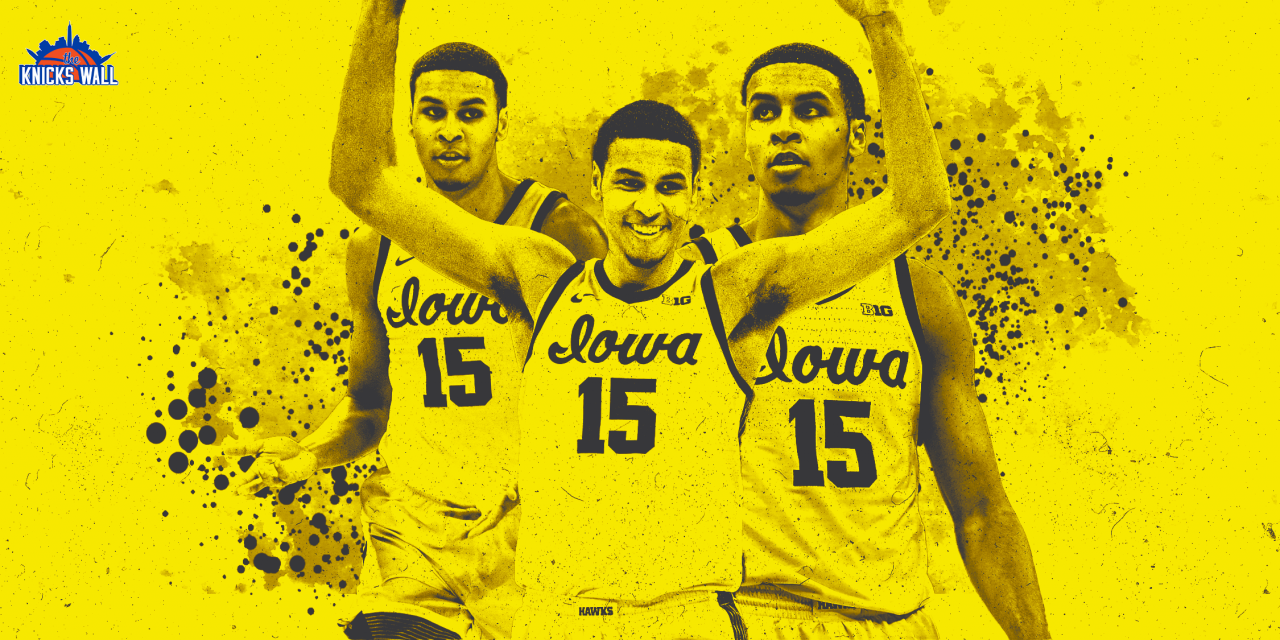 Keegan Murray fits the two-way wing scorer archetype that every NBA team is looking for. Could he be a realistic target for the Knicks?

Unless you were an Iowa Hawkeyes fan, odds are you hadn’t heard of Keegan Murray entering this past college basketball season.

The 6-foot-8, 225-pound forward quickly changed all that with a massive breakout campaign as a sophomore, bursting onto the scene as one of the top stars in college hoops and, now, one of the top prospects in this year’s NBA Draft.

After averaging a modest 7.2 points per game as a freshman, he emerged as one of the top all-around players in Division I college basketball, recording career highs in nearly every category. At 23.5 points per game as a sophomore, Murray was the fourth-highest scorer in the country, and he also averaged 8.7 rebounds, 1.5 assists, 1.3 steals, and 1.9 blocks while shooting 55.4% overall and 39.8% from long range.

Murray was a consensus first-team All-American and won the Karl Malone Award, given to the nation’s top power forward in college basketball. He was also a National Player of the Year finalist and was named the Big Ten Tournament’s Most Outstanding Player after helping his team capture the conference tournament crown.

Murray didn’t get a chance to be a March Madness darling, since he and his Hawkeyes were bounced out of the tournament in the first round following an upset win by Richmond, but he still managed to log 21 points and nine rebounds in the loss.

He’s looking to be the first Hawkeye to be drafted in the first round since 1998. There’s no doubt Murray will be able to do that, but how will his game translate to the NBA?

Scoring ability: While he won’t have free rein to do whatever he wants, Murray made it clear that at Iowa he’s capable of scoring in almost any way he chooses. Murray was dangerous in transition, but also just as solid in half-court sets and was able to be a problem for opponents with or without the ball.

He’s able to make smart cuts and moves towards the basket and is a dependable target down low. He knocked down 62.1% of his attempts from inside the arc and showed he’s a great back-to-basket finisher, but also has a smooth spin move and step-back mid-range shot.

Murray could also stretch things out to the perimeter and is a pick-and-pop threat. His off-ball movement also translated to the three-point line, as he weaved his way to get open and create quality looks. On top of his ability to score at all three levels, Murray doesn’t really try to force things or do too much, which will bode well for him as he starts out in the NBA, but also made him an even more efficient player and scorer this past season.

Defensive versatility: While he’s a dynamic scorer, he’s far from being one-dimensional on the other end of the court as well. Murray is capable of guarding various positions, which will be key in the switch-heavy NBA. He can keep up with guards at the perimeter, but also drop down into the post and defend big men. According to Sports-Reference, he placed in the top five for total steals (45) and blocks (68) this past season and boasted the seventh-highest Defensive Rating in the Big Ten at 96.8.

I think Keegan Murray could have utility as a small ball five in the NBA because I really like how he guards a P&R as a big, consistently in the right place on these plays pic.twitter.com/8m8i48un36

High-motor player: Murray seems to only operate at full speed, and it certainly translated well when it came to rebounding or generating turnovers. He has great reflexes and instincts on the court, which helps him be a tough defender and a tenacious rebounder.

He averaged approximately three offensive rebounds and a total of nine rebounds per game. His lengthy frame combined with his hustle makes him a pest for opponents, but also makes him all the more fun to watch.

Ball handling/shot creation: Murray will have to expand his bag in the NBA. He wasn’t a great shot-creator at Iowa, especially away from the basket but had enough length, cleverness, and go-to moves to get by in college. But that predictability might not be enough to cut it against better competition. Aside from that, his handle is a bit loose, so he’ll certainly need to tighten that up. He’s not an explosive athlete by any means, but his craftiness and length make up a lot of that ground. If he can diversify his arsenal of moves, he’ll be a much tougher player to guard.

Questions around playmaking: This is an area of his game that hasn’t been explored or shown much throughout his time at Iowa. Whenever he got the ball, Murray mostly looked to finish or shoot it, and not so to much set others up. He didn’t turn the ball over much, just 1.1 times per game while dishing out 1.5 assists per game, but this is something that could be tapped into more at the next level. Murray isn’t an unselfish player and is smart with the ball, but this is still an unaddressed aspect of his game. Murray’s season-high assist mark was only four, which he did once all season.

Defensive gambles: Murray delivered a lot of highlights at Iowa, especially this past season. There were times he tended to bite or over-commit in trying to create a steal or a big play, which resulted in him getting burned defensively. This is a minor fix and likely one that may go away if he gets a tighter leash as a rookie in the NBA.

Two-way players go a long way in the NBA, and Keegan Murray has the tools to be an effective player on both ends of the court. While he might be an older player at 21 years of age, his promise is still there, especially if he can continue to build off of his breakout year with the Hawkeyes.

Murray is expected to go somewhere in the top 10, which puts him out of range for the Knicks unless the front office pulls off something crafty to put themselves in a position to get Murray, which would likely involve both a trade-up and some roster shuffling of their big men up front, given their crowded frontcourt. His versatility and skills on both ends of the court make him an intriguing prospect to watch, it just likely won’t be at Madison Square Garden, except for when he comes to town as an opponent.

»READ: Can Dyson Daniels be another young, upside asset?

»READ: Johnny Davis could provide guard help for the Knicks at 11