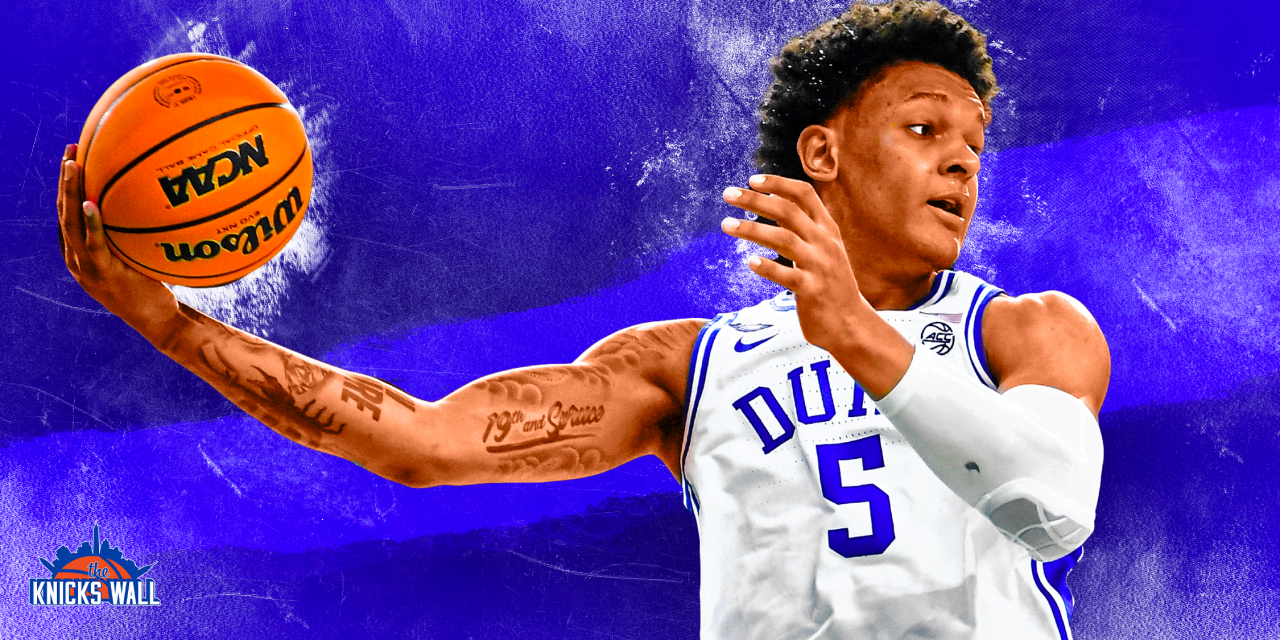 Duke forward Paolo Banchero has the unique blend of skills to anchor an NBA offense, but the Knicks will likely miss the top-three draft pick.

It wouldn’t be NBA Draft season without taking a look at a potential no. 1 pick, and the longshot odds it would take for the universe to have him fall into the New York Knicks’ laps!

Paolo Banchero has pretty much been in the top pick discussion since his high school days. He was rated the no. 2 overall prospect in the class of 2021, behind Chet Holmgren, and he lived up to the hype at Duke.

A consensus five-star recruit and a McDonald’s All-American, Banchero led the charge for the Blue Devils in Coach K’s final season. He averaged a team-high 17.2 points and 7.8 rebounds, with 3.2 assists and 1.1 steals per game. Banchero shot 47.8% overall and 33.8% from beyond the arc. The Seattle native was named an All-American and took home ACC Rookie of the Year and first-team all-conference honors.

There were times that the 19-year-old forward looked like a man among boys, but how will his game translate to the NBA?

Physical tools/athleticism: One of the first things that stuck out about Banchero was his frame and build, especially compared to his peers on a college court. Banchero looked like he was already a grown man. He has a 6-foot-10, 250-pound frame that’s pro-level ready. Banchero also has a seven-foot wingspan and, aside from all of the measurables, he’s got a great blend of athleticism, fluidity, and strength to his game.

Although he might not bounce and elevate out of the gym, he has a certain craftiness that typically isn’t seen from someone with his build. He’s quick enough to cross-up and dribble past a defender, and he’s got a spin move that he likes to use to free himself up. Banchero always seems to be in control and doesn’t look awkward or uncoordinated when compared to other big men that may try to attempt different dribbling moves. Banchero has good handles, footwork, and balance.

While this is certainly a positive point for Banchero, it will also be interesting to see how much of his effectiveness was simply because he could bully everyone else around him in high school and college, or if it’ll seamlessly carry over when he’s in the NBA.

Point-forward capabilities: It’s all about versatility nowadays, and Paolo Banchero could be the next point-forward sensation. He can run an offense, make the right reads, and he has great instincts on the court. While he was always a solid playmaker, he really developed the facet of his game throughout the season, cutting down on his turnovers and increasing his assists as the year went on.

Who in the NBA reminds you of Paolo Banchero? pic.twitter.com/eZs4ZMsIWq

Banchero finished with 3.2 assists and 2.4 turnovers per game, and this is an area that can be explored more in the NBA. He knows when to defer to his teammates and his guard-like skills definitely helps put his value over the top.

Scoring ability: Banchero can score from anywhere on the court and do it in a variety of ways. He feasts on mismatches, being able to shake off or drive past bigger opponents, or just go right through the smaller ones. He’s capable of knocking down catch-and-shoot opportunities, or comfortably knock down a pull-up mid-range jumper.

He’s most dangerous in the mid-range area and has a great face-up game. If he can get to work in the low block, Banchero has good footwork in the post and has a killer fadeaway shot that gives his defender a hard time. To make his opponents’ jobs even harder, Banchero is adept at drawing fouls and can get to the line often.

Three-point shooting: Banchero shot 33.8% from the three-point line this past season, which isn’t terrible or great, but when the arc moves a few feet further back in the NBA—that’s not going to cut it.

Fortunately, this is a fixable problem, and his shot can be tinkered with until it becomes a more consistent and sustainable part of his arsenal. It’s not that he can’t shoot, he just needs to be able to do it more consistently.

According to CBB Analytics, Banchero is actually a good three-point shooter from the corner. He knocked down a combined 16-of-22 perimeter shots from the corners, but he’s cold everywhere else around the arc, shooting at a meager 25.0% clip.

Developing a three-point shot is imperative, and that’s likely been a high priority as he works out and prepares for the draft.

I think @Pp_doesit should be the #1 pick in this years NBA Draft; at 6’10” he can score at all 3 levels, he picks things up & listens really well 💯 My guy has a VERY bright future! pic.twitter.com/Y26B7eq217

Defensive shortcomings: There are plenty of questions surrounding his motor and defensive ability. At times, it looks like he could use more intensity and effort on this end of the court, and other times where he appears to be a capable defender that puts himself in the right positions.

Although he’s a big man with a unique skill set and athleticism, it hasn’t translated to this end of the court. He’s made defensive lapses and lost his man, but there are other times where he got flat-out burned and couldn’t recover as his opponent went in for an easy basket.

Aside from the mental hurdles, most of his defensive shortcomings are due to his lack of lateral quickness, which is concerning as the tempo of the game increases from college to the NBA. Although he’s big, he’s not quite large enough to be an imposing rim protector and he doesn’t have the explosive vertical leap to make up for that discrepancy, besides he’s definitely at his best when he’s not tied down to playing the 5.

Unless the Knicks can strike gold with the draft lottery or make a crazy blockbuster trade, Banchero most likely won’t be on the board by the time New York gets to pick.

As for Banchero’s prospects, it’s hard to not fall in love with his game on the offensive end of the court. He’s not a traditional big man by any means. He can finish in the post when he needs to, but also handle the ball like a guard and even facilitate an offense.

There are concerns defensively, but overall, the future is bright for Banchero. If he doesn’t go first overall, then he’ll certainly go somewhere in the top five. Although he might not have the booming ceiling as some of the other prospects, Banchero definitely a safer pick with still a good amount of pro potential and is capable of starting and making an impact from day one.

»READ: Trading up in the NBA Draft might be worth it for Jabari Smith Jr.

»READ: Chet holmgren is the unicorn of the 2022 NBA Draft