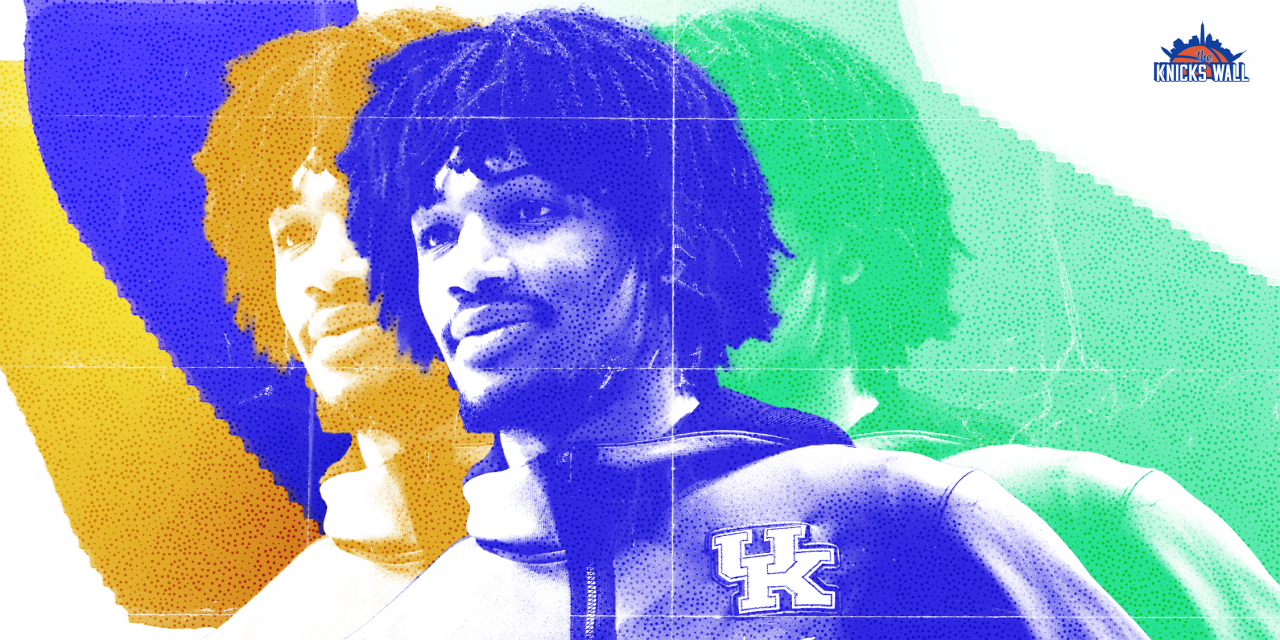 Shaedon Sharpe is the 2022 NBA Draft’s biggest mystery box. What can Knicks fans expect if they’re able to land the intriguing talent?

There is something to be said about a player who never suited up for a single college basketball game but still remains one of the highest sought-after prospects. That’s the case with Kentucky’s Shaedon Sharpe, who remains in the lottery and even top-10 pick conversations for the upcoming 2022 NBA Draft.

Sharpe was once considered the top high-school prospect nationally in the class of 2022, but he chose to reclassify and graduate high school early to get a head start with the Wildcats. After making the switch, he was ranked the no. 3 prospect in the 2021 class, according to 247 Sports, behind consensus top-three prospects Chet Holmgren and Paolo Banchero.

He enrolled at Kentucky in the middle of the year, officially joining the team in January, but coach John Calipari declared in early February that Sharpe would not be playing for the Wildcats this season. Instead, he would remain a practice player, working out with the team with the hope that he would explode onto the scene for the 2022–23 season.

Ultimately, that didn’t end up happening, with Sharpe bolting for the NBA. A former standout at the Dream City Christian School in Arizona, his last in-game action can be seen on the AAU circuit. As a member of UPLAY Canada, he played 12 games on the Nike EYBL, averaging 22.6 points per game and 5.8 rebounds, while shooting 47.9% overall and 36.4% from three-point range.

For those who haven’t been keeping up to date with Sharpe’s AAU tape, here’s a deeper dive into the 6-foot-6, 200-pound guard.

Athleticism/physical tools: It has been often said that you can’t coach size, and while Sharpe might not be a hulking beast, he enters the NBA Draft process blessed with a seven-foot wingspan and a reported 49-inch vertical.

That length should offer him positional versatility, which will help on both ends of the court. Although he hasn’t taken on NBA-caliber competition yet, once he settles into the much faster pace and learns defensive schemes, he could potentially be a disruptive player, especially in the passing lanes.

As for his vertical, while it hasn’t been measured yet in official combine settings, there is a recent video that picked up plenty of steam.

NBA draft prospect Shaedon Sharpe has a vertical of 49 inches.

To put it in perspective how crazy that is, Micheal Jordan currently has the highest vertical leap in NBA history at 48 inches. pic.twitter.com/FYIARanBbG

As mentioned in the above tweet, Michael Jordan’s max vertical leap is listed at 48 inches. Portland rookie Keon Johnson also measured at 48 inches, breaking a 20-year-old record at the 2021 NBA Draft Combine.

Add all of this to his solid 6-foot-6 frame and throw in an intriguing combination of strength and speed and you get an impressive player who is physically ready for either guard spot in the NBA if he’s able to hit the ground running.

Shaedon Sharpe with a huge finish inside.

Love how he kept his balance after being contested at the rim to go for a tough finish. Not easy to maintain body control like that in mid-air.

I have a feeling the Knicks will get their hands on him this year! pic.twitter.com/JoJdq7fcVp

Scoring ability: Aside from his physical tools, Shaedon Sharpe excels as a scorer—it’s what grabbed scouts’ attention and catapulted him up the rankings when he tore through his opposition in high school and on the AAU circuit.

Sharpe has great jump shot mechanics, giving him the capability to pull up and score from nearly anywhere on the court. His explosiveness and athleticism also allow him to drive past his defender and finish strong at the basket with either hand.

The Canadian native is creative on the court, with an uncanny ability to open up space for himself to knock down shots. This will be a vital asset at the next level.

While he mostly projects as a two-guard, Sharpe was a combo guard at times before arriving at Kentucky. He was able to set up his teammates when defenders started mounting up their attention towards him, showing that while his inclination may be to score, he’s not fully one-dimensional.

Plenty of unknowns: The highlights and videos are fun to watch, but how much of it will translate? How soon can he settle in, and how long will it take to develop other parts of his game? It’s clear that Sharpe is an athlete and a talented player, but this will be a steep jump from lighting up AAU—which doesn’t have the greatest reputation for lockdown defense—to excelling in the best basketball league in the world.

Granted, nobody except for Sharpe, his Kentucky teammates, workout trainers, and partners, knows what’s exactly going on behind closed doors. He is a gamble in the sense that there’s not much game tape to analyze, but his high upside remains intact.

Free-throw shooting: It’s a limited sample size, but this carries across any level of basketball. Through 12 games on the Nike EYBL, he went a combined 33-for-52 (63.5%) from the charity stripe.

It’s not a great shooting clip, but it can easily be tinkered with and fixed over time.

While Shaedon Sharpe is taking a rather unconventional path to the NBA, it wouldn’t be the first time someone went from high school to the NBA, while taking a year off in between without playing college basketball or some sort of pro league.

Former McDonald’s All-American Darius Bazley was originally committed to Syracuse, then decided to forgo college and opt for the G League instead. He ended up dropping his G League plans altogether and training for the draft on his own. Despite all this, he was still picked 23rd overall in the 2019 NBA Draft and became a starter for Oklahoma City over the last couple of years.

Mitchell Robinson also made a similar jump after withdrawing before the start of his freshman year at Western Kentucky, opting to train solo rather than play for another college or pro team. It worked out for him, even as an early second-round pick in the 2018 draft, becoming one of the top shot-blockers in Knicks history.

However, Sharpe is in a different tier, since he’s still in the lottery and top 10-pick conversation despite the circumstances. His high upside speaks for itself, but given the unknowns, there is also major boom-or-bust potential.

After all, Emoni Bates was once regarded as a generational talent, only to have an underwhelming season at Memphis—albeit some of that, it could be argued, was due to back injuries and being improperly utilized at times.

The Knicks have had some pretty bad draft luck over the years, but if Sharpe somehow falls in their laps—and if he hits—the Knicks could potentially find themselves with one of the more exciting, young shooting-guard prospects in the league.