Should Mark Williams Be a Trade-Back Target in the Draft? 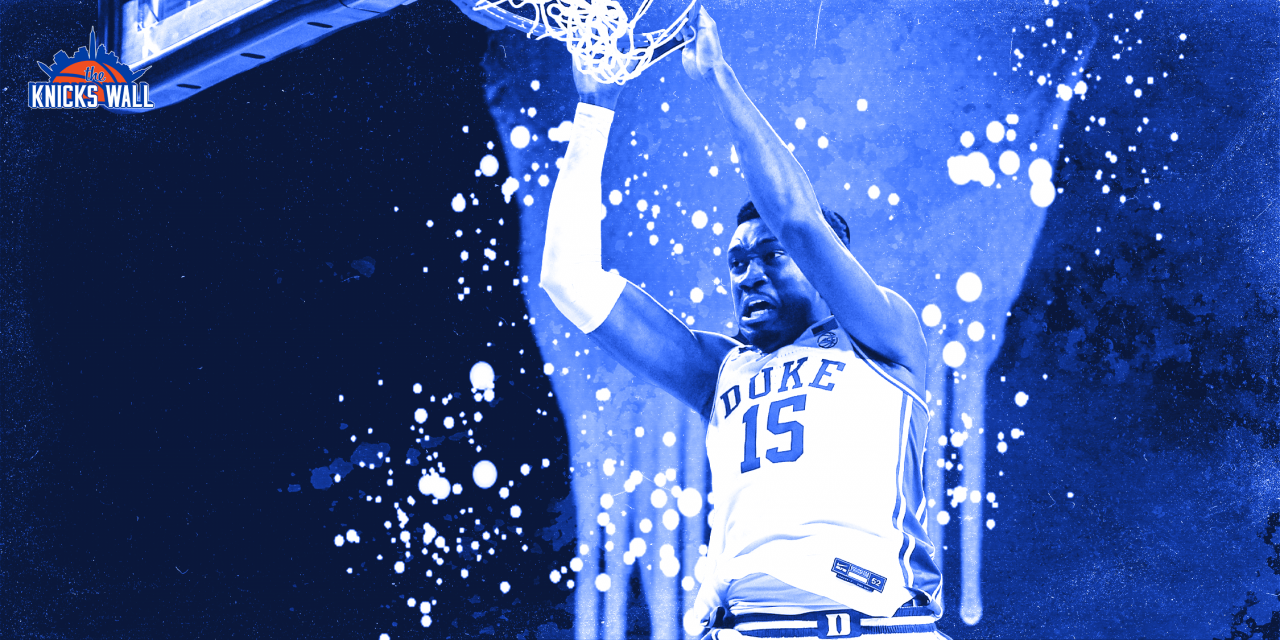 Entering the third season of the Leon Rose Braintrust era, we still have more questions than answers about the front office’s plans and preferences for the long-term shape of the roster. We don’t even have a clear-cut idea of what types of players they value or look for, though with each passing year there’s a little more clarity: for starters, every non-international player they’ve drafted (Obi Toppin, Immanuel Quickley, Quentin Grimes, Miles McBride, and Jericho Sims) has been a multi-year college player.

Another thing we know about the front office’s approach to drafting is that they identify the guys they want and will trade back as many times as needed to get to them while extracting as much value as possible in the process—what we in the biz call “the Brock Aller special.”

While most Knicks fans (myself included) are likely hoping that they go the opposite direction this year and trade up for Jaden Ivey, given the team’s track record over the last few drafts, it seems more than likely that trading back is an avenue they will explore thoroughly. And between Mitchell Robinson’s looming free agency and the team’s recent preference among their big man targets, what better place to start than with the biggest rim-runner in the class: Mark Williams.

Who is Mark Williams?

Williams is a second-year center who played this year alongside potential top-five picks Paolo Banchero and AJ Griffin at Duke. A five-star prospect entering college, he had a slow start to his career, only playing 15-plus minutes twice in his first 12 games as a Blue Devil. Midway through his freshman season, though, he got the starter’s nod and immediately started putting teams on notice. After only scoring in double digits once in the first half of the season, he ended the year on a tear, averaging 16.7 points, 7.8 rebounds, 1.7 blocks, and 1.5 steals over the final six games of the year.

One of the big questions entering this year for Duke was whether that late-season production for Williams was real or just a hot streak, but those questions were put to bed with a quickness. Though he wasn’t a 17 points-per-game scorer, Williams averaged 11.2 points, 7.4 rebounds, and 2.8 blocks per game as the unquestioned backbone of Duke’s defensive line this season while leading the NCAA in True Shooting percentage and Offensive Rating and coming in fifth league-wide in total shots blocked. He was the ACC Defensive Player of the Year and was named to the NCAA All-Tournament Second Team

He was also one of the big winners of the measurements section of the NBA Draft Combine, coming in at a gargantuan 7’2″ in shoes with a 7’6.5″ wingspan and 9’9″ standing reach. And let’s not forget, he has the most infectious smile in the draft.

What kind of offensive game does he have?

As of right now, Williams’ game can be summarized in five short, repetitive words: dunks, dunk, and more dunks. Williams had great success this year leveraging his size and soft hands to catch everything around the rim and throw it down. His rock-solidity in the paint help calm things down for a Duke team that could sometimes be inconsistent, and he developed great chemistry with point-forward Paolo Banchero. Nowhere was this seen more than the Duke-Syracuse game, where the Paolo-Mark two-man game was run over and over again to devastating effect.

One thing that allowed this partnership to thrive was the fact that Williams has incredible hands for a big man. Between his coordination, length, and leaping ability, it’s hard to throw a pass up that he doesn’t have a good chance to corral. As someone who will primarily serve as a lob-threat at the next level, that can be a separator between a starting-caliber center and a role just south of that.

His hands and instincts show up on the offensive glass as well. With his long arms and ever-present motor, Williams is a menace on the boards. He’s got a good eye for where the ball is going, and even when he can’t get to it himself, he’s an expert at the Tyson Chandler tip-back to keep possessions going.

He also thrives getting out in transition, regularly out-running opposing bigs for outlet dunks, transition put-backs, and of course, lobs.

While he showed some nice touch around the rim on post-ups, he struggles to create advantages with physicality despite his size, more often relying on shooting soft baby hooks over the top of defenders, rather than going through them. This also led to him being pushed out of the paint by more physical defenders, leaving him to toss up a prayer of a floater.

He did shoot a respectable 72.7% from the line this year, a dramatic increase from his freshman mark of 53.7%, but any dreams of him being an outsider shooter in the NBA should be kept on layaway for the time being. It’s not out of the realm of possibility for him to be a one-three-attempt-a-game center à la Jarrett Allen, but there’s a lot of work to be done on his mechanics and shot prep before he’ll be ready to reach even that benchmark.

For reference, this was his one three-point attempt on the season, likely inspired by his matchup with potential top pick Chet Holmgren:

Okay okay, now give me the good stuff. How’s the defense?

If Williams is taken in the lottery, which is looking increasingly possible, it will be on the strength of his defense. When locked in and reading the game, he is simply a force to be reckoned with. He’s a violent shot-blocker, and more than happy to alter the shots he can’t get his hands on. He can be incredible to watch as a help-side defender, absolutely swallowing up shots and drives, and should absolutely thrive in drop coverage.

He’s at his best when he stays on his feet against driving guards, using arms the size of giraffe legs to send any thoughts of the rim skittering off into the ether before recovering onto his big man assignment, and as the season went on, he became more comfortable guarding in space.

However, there are still some very real areas of improvement to address.

First, let’s get one thing clear: Williams is a very good athlete, but he’s not an elite one. If we’re comparing him to Mitchell Robinson, the contrasts are stark. Williams is significantly slower off the ground, has a much slower second jump, and has much heavier feet on the perimeter. He relies on timing and length, and while his timing is very good, it’s fair to wonder if it will reach a high enough level to offset some of the movement concerns when he gets switched onto NBA guards.

His lack of comfort in space shows up in several obvious areas. He stays too upright against ball-handlers, leaving him susceptible to blow-bys, he’s easily faked out by even the simplest ball-fakes or dribble combos, and he at times lacks awareness when off-ball in action with a shooter, whether a guard or a stretch big. His foot speed, which is by no means terrible but is also by no means elite, leaves a relatively low margin for error as a help defender, even if his length gives him some leeway. If he’s a beat late recognizing a help rotation, he may not be able to catch up to the ball-handler.

In the post, his struggles usually come when he allows his man to establish first contact, rather than taking his physicality to the offensive player. Williams is going to put on muscle, and probably a lot of it, but too often this year he let big men get into his body and couldn’t recover. His hands are good but they can also be a touch slow when his man tosses up a quick shot.

Now, there are caveats. The Duke defense generally was pretty poor this year. Banchero has good defensive instincts but was inconsistent and not always locked in, and Griffin had significantly more bad than good moments as a perimeter defender. This left Williams with a massive amount of responsibility and ground to cover, so he can be forgiven for sometimes being late on a rotation or left facing down the barrel of a two-on-one attacking situation. Furthermore, some of these issues, such as staying locked in, recognizing rotations, and staying in his stance, will naturally improve with reps and good coaching. At the end of the day, Williams is a good bet to be, at the very least, a very, very good regular-season defender.

What does all of this mean for the Knicks?

Taking Williams at 11 would be a stretch, and I would be surprised if that’s in the cards, especially given the way the top 12 or so in the draft seems to be shaking out. But a scenario that could very much be in play would be trading the 11th pick to, say, Charlotte for picks 13 and 15 (and if Nerlens Noel needs to be thrown in as sweetener, so be it) if the Hornets are in love with someone still on the board. That would allow the Knicks to take Williams, a relatively safe pick, while also adding a guard or wing they like the upside of, such as Malaki Branham, Jaden Hardy, or Jalen Williams, to name just a few.

If they don’t think Mitchell Robinson is going to be around next season, there’s some sense to that. No non-star prospect is ever a certainty to be a starting NBA player, but it would not be at all surprising if Williams becomes a perfectly fine starting center in the league. Unless he has some massively unexpected growth areas, it’s hard to imagine him becoming a top-10 center in the league, but getting an average starter at the end of the lottery is solid value.

If there’s one thing the Knicks are currently loaded with, though, it’s run-and-jump non-stretch centers, so adding Williams would only make sense if one, or maybe even two, of Mitch, Noel, or Jericho Sims, are moved this summer. If that isn’t the plan, then maybe Williams is best left to teams with more need for his skill set.

»READ: Jeremy Sochan: the most versatile player in the NBA Draft