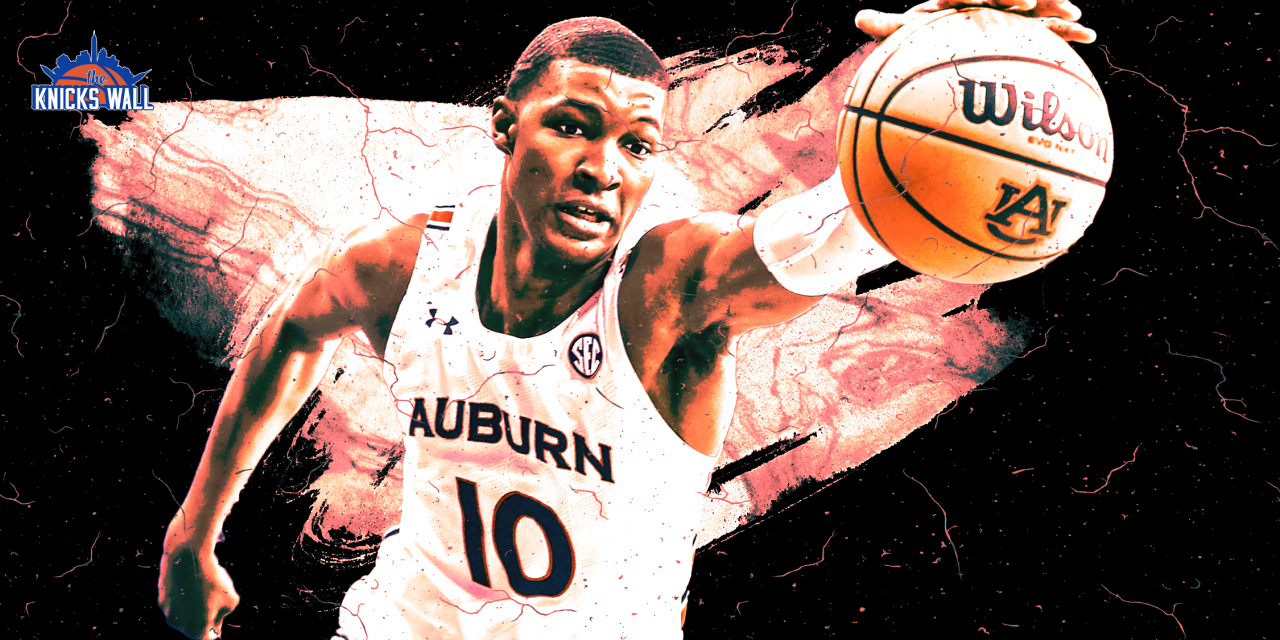 Might the Knicks decide to trade up in the NBA Draft to take a sure thing of a prospect like Jabari Smith Jr.?

Going into the 2022 NBA Draft, absolutely nothing is set in stone for the New York Knicks. With a pick expected to land in the latter half of the lottery, there is no one player that the team seems to have their eyes on.

A possible idea for them, while it might be aggressive, would be trading up to a top-three pick to have a shot at one of the best prospects this draft class has to offer, Jabari Smith Jr. While Julius Randle and Obi Toppin occupy the power forward position in the rotation, which is where Smith would likely operate best in the NBA, he just might be good enough to warrant swinging a trade to get him involved.

The 19-year-old freshman out of Auburn had one of the best seasons in college basketball this year, averaging 16.9 points and 7.4 rebounds on his way to being named to the 2021–22 All-SEC First Team. He’s a remarkable shooter for his size at 6’10”, taking over five three-pointers per game and making them at a 42% clip.

Smith ended the season on a sour note, as Auburn fell to 10th-seeded Miami Hurricanes in the second round of the NCAA tournament. It was Smith’s second-worst shooting performance of the season, making just three of his 16 shots from the field, and one of his eight three-point attempts. He managed to be a contributor otherwise, though, notching 15 rebounds, four assists, and three blocks.

Smith is a great shooter and can hit from just about anywhere on the floor. He’s got a quick release and length that makes most of his shots un-contestable. This makes him easily able to back down defenders and hit stepback jumpers like he’s Kevin Durant. Also a 43.5% shooter inside the three-point line, he’s a player that would immediately add long-range shooting to any team that needs it. He also gets to the free-throw line a fair amount, taking just under five attempts from the charity stripe per game at 80%. On a team like the Knicks that have prioritized three-point shooting and drawing fouls into their game plan, Smith is a player that would definitely make an impact.

As great of a shooter as he is, Smith does struggle with scoring in the paint for someone of his size, however. He only attempted 10 or more shots inside the three-point line three times last season, and his shooting percentage from there is only 1.5% higher than his three-point percentage. Additionally, of his 7.4 rebounds averaged per game, he averages just under one on the offensive end. The Knicks have the benefit of holstering strong post players like Randle and RJ Barrett that can brunt that part of the offense, though, while Smith figures out that part of his game. He certainly has the size and frame for it, but just might take a year or two to incorporate it into his game.

When it comes to passing and ball-handling, Smith is capable but nowhere near stellar. He averaged two assists to just under two turnovers per game last season. As aforementioned, he has a hard time scoring in the post and would rather back down defenders for jump shots than blow past them. Because of that, he sometimes misses opportunities to find teammates for better shots when he occupies space in the paint. This would be a bit of an adjustment if he were to somehow end up with the Knicks, considering how great of a passing forward Randle is.

Potential No. 1 pick Jabari Smith has shown out all season for Auburn.

His top ten plays from this season 🔥 pic.twitter.com/YAI6Tf5aD7

Defensively, Smith would also be an immediate contributor. He averaged a steal and block per game at Auburn and seems to constantly be involved against the opposing ball-handler. His wingspan benefits him greatly as an on-ball defender, and he would often scare players away from the paint and out to halfcourt. In the paint, he also uses his 6’10” frame to be a vertical threat. He posted the eighth-best Defensive Rating in the SEC last season at 90.7, responsible for many of Auburn’s stops.

Someone of his size on defense could be valuable to the Knicks as Mitchell Robinson enters unrestricted free agency with no conversation yet about returning to the Knicks. One of the top shot-blockers in the league, Robinson was invaluable as the Knicks rediscovered their defensive identity in the second half of this season. If he were to leave, someone like Smith could step into the frontcourt and take a shot at being the team’s leading shot-blocker. Especially considering such a scenario would involve players like perhaps Randle or Toppin being traded from the Knicks, Smith would be left with a lot of room to cover in the post.

Jabari Smith again showed his exceptional skill-level, making an array of difficult shots, while playing his usual lockdown defense in a win over Oklahoma. Another night at the office with 23 points and a career-high 12 rebounds for the potential No. 1 pick. pic.twitter.com/YS9pexYACb

In order to be in a position to draft Smith, the Knicks would either need to get incredibly lucky in the draft lottery or give up a fair share of the roster to trade into the top three picks. With that said, it’s tough to envision a viable trade option for the chance to draft Smith without the Knicks blowing up plenty of the foundation they’ve already built.

Rather than making a trade for a proven player like Donovan Mitchell or Damian Lillard, too, Smith would be much more of a mystery with no true NBA experience. If the Knicks were to part with a sizable portion of the roster, it should be for someone with an NBA resume already rather than someone that will take a few years and then maybe develop into a top-tier talent. If the ping-pong balls should somehow favor the Knicks and garner them a top-three pick, though, well that would sure make life a lot easier.

»READ: Chet Holmgren is the unicorn of the 2022 NBA Draft