Is TyTy Washington the Right Point Guard for the Knicks? 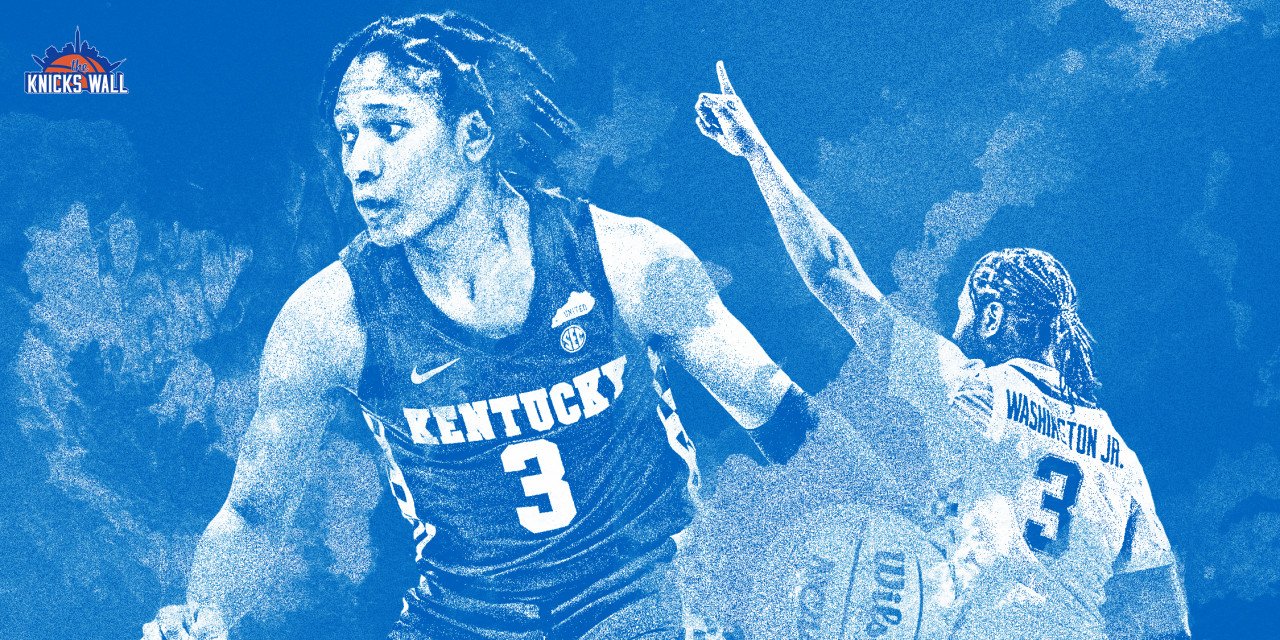 Freshman TyTy Washington out of Kentucky boasts an offensive profile that would bolster any NBA team, but is he a fit for the Knicks?

In a disappointing season for Kentucky that saw them lose to the Cinderella team of the NCAA tournament in the first round, 15th-seeded Saint Peter’s, TyTy Washington was one of the few respites for the Wildcats.

The freshman point guard out of Phoenix, Arizona, averaged 12.5 points, 3.5 rebounds and 3.9 assists in his one year of college ball on shooting splits of 50/35/75. He’ll take a few college accolades with him to the NBA, including being named to the 2021–22 SEC All-Freshman Team and All-SEC Second Team.

TyTy Washington is a mid-range assassin. Mix in a few more of those 3s and I see the lottery upside.

In his one game in the NCAA tournament, though, Washington showed exactly why scouts may exhibit doubt when it comes to drafting him in June. He had five points on just 2-for-10 shooting from the field (1-for-2 from three) to go with no free throws attempted and just one assist. Assuming he’d retain the role of point guard in the NBA, a stat line like that shows exactly why he might not be an appropriate fit for a team like the New York Knicks that have desperately needed a proven point guard in the lineup for some time.

While the scoring in that tournament game was an anomaly for Washington, the free throws attempted are mostly par for the course. On the season, he averaged only 2.1 free throws per game and didn’t seem too active at the rim. He had a stretch from November to January where he only attempted free throws in one of nine games played. His highest total taken in any game during the season was six, and his shot profile helps to explain why this part of his game is lacking.

Washington, a bit undersized at 6’3”, really does not make his living inside the paint. He took only six or fewer two-point attempts in 10 of his 31 games played last season and tends to settle for longer mid-range shots and floaters. He’s also a decent three-point shooter, making 35% on his 3.3 attempts per game. While his long-range shooting skills can certainly help an NBA team, it probably wouldn’t make him the right fit for these Knicks.

Rewatching the Kentucky loss and this play stood out. TyTy Washington turns the corner out of PNR…and runs into 4 opponents, as both non-shooting Kentucky bigs are clogging the paint. Almost no one (successful) plays this style of cramped offense anymore, anywhere in the world. pic.twitter.com/mv7tr3WeCR

The Knicks’ quest to make three-pointers a staple of their game has been well documented, and they mostly made good on that this past season. They finished this last season among the top 10 in the NBA in three-pointers taken per game with 36.9. With that, however, has become a deficiency in inside scoring for the team. Only 46% of their attempts last season were two-pointers, the 29th-worst percentage in the league only trailing the Utah Jazz. Furthermore, the Knicks took shots within 10 feet of the basket on only 38.9% of their two-point attempts. A point guard taken in the draft by the Knicks would likely need to be someone with the ability to create more scoring opportunities for them in the paint.

Washington is reliable with the ball in his hands, though, knowing when to make the right passes and avoid risky ones. He netted nearly four assists to 1.6 turnovers per game, good for just a 12.2% turnover rate. He was responsible for more than three turnovers in a game just twice last season and had a miraculous 17-assist outing against Georgia back in January. At the least, he’s the type of player who could convince Knicks head coach Tom Thibodeau to let him call out plays going down the court with a good basketball I.Q. about him.

17 points, 17 assists, 2 turnovers for projected lottery pick TyTy Washington. Broke John Wall's single-game record for assists by a Kentucky player, and the most-ever for a freshman in SEC-play, per @JaredBerson. pic.twitter.com/QzINnDAHCz

Defensively, Washington didn’t do much to stand out in his one year at Kentucky. Being a bit undersized for the league, he’d be easy for opposing teams to draw into a mismatch. A slower guard, too, opposing guards could attack him off screens and use their quickness to get to the basket while leaving Washington in the rearview. He is definitely willing on the defensive end, though, having five games with at least three steals and pulling down nearly three defensive boards per game for a guard. Defense aside, it’s tough to make enough of a case for his offensive skill set to be beneficial to this Knicks team.

So, while last offseason focused on bringing three-point shooting to the team, this one should be devoted to looking for a guard who’s able to unlock the team’s ability to score in the paint once again. This is what someone with Kemba Walker’s former explosiveness was expected to bring to the table, but the Knicks will have to begin that search anew.

It’s worth wondering if the Knicks’ brass is even thinking about a point guard with their first-round pick given the continued improvement of Immanuel Quickley and a (hopefully) healthy Derrick Rose. Whether or not Tom Thibodeau will ever play him at point guard, though, is a question for another day.