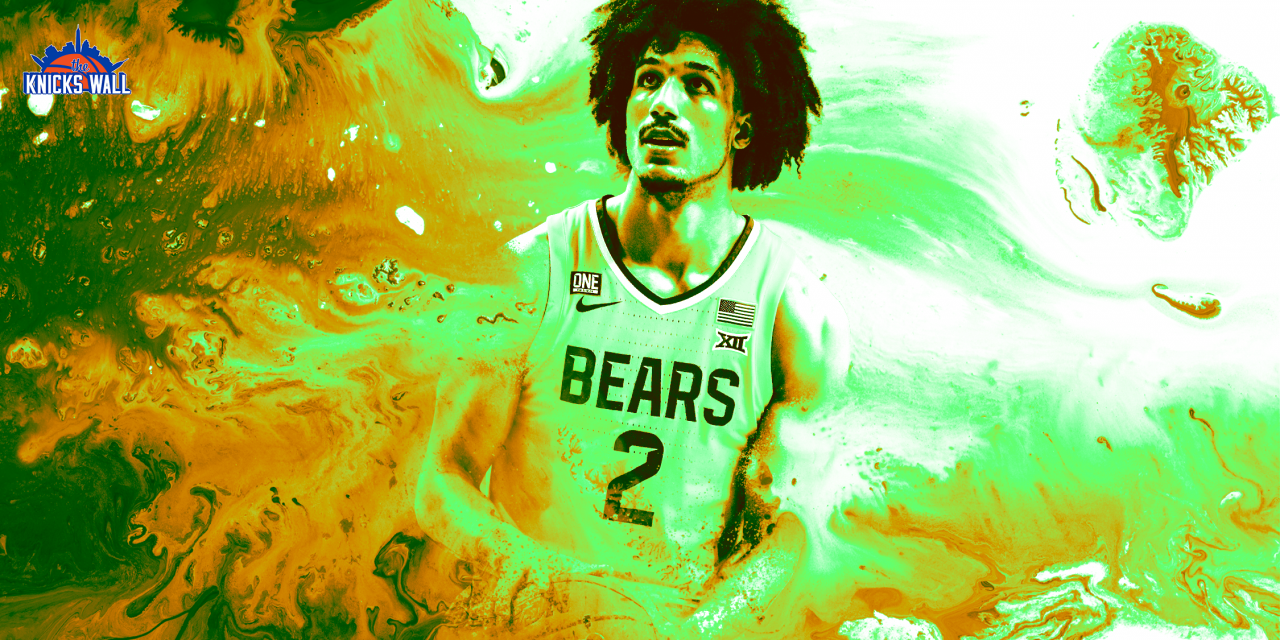 Though Kendall Brown is unpolished and struggles to make plays on offense, his physical gifts should make him a first-round pick in the 2022 NBA Draft.

Despite being a wide-eyed freshman, Kendall Brown started every game for Baylor during the Bears’ title defense. Brown averaged 9.7 points, 4.9 rebounds, 1.9 assists, and 1.0 steals across 34 appearances. These numbers earned him Big 12 All-Rookie honors and will likely make him a first-round pick in the 2022 NBA Draft. Let’s examine Brown’s strengths, weaknesses, and if he could highlight the Knicks’ draft class as the 11th pick come June 23rd.

The 6’8″, 205-pound guard could not deliver the Bears another championship, as Baylor fell to the eventual runner-up North Carolina in the second round of the NCAA tournament. Brown compiled a mere six points in 28 minutes during that game.

Off-ball scoring: Brown functioned as a role player in his lone collegiate season. He didn’t take many shots, but made the most of his scoring chances (he shot 78% at the rim), thanks to excellent off-ball movement. He has a knack for timing backdoor and baseline cuts for easy layups, a lost art in today’s iso-heavy style of basketball. Brown’s ability to move away from the ball should serve him well in the NBA, especially considering he’s also likely to be a low-usage offensive player in the pros.

The offense is a work in progress, but Kendall Brown consistently displays a savvy backdoor cutting ability.#NBADraft #CollegeBasketball #SicEm pic.twitter.com/M23tXYeiBK

Athleticism: Along with outstanding measurables, Brown has another natural gift: the former Baylor standout is perhaps the most explosive leaper in his class. In last month’s NBA Draft Combine workouts, Brown finished first among wings and second among all participants in the vertical jump, reaching a height of 41 inches. This jaw-dropping athleticism makes Brown a highlight reel waiting to happen in transition.  Impressively, the springy Brown is even an effective lob finisher on the break, a skill rarely seen in wings. It could be electric to watch Brown and Obi Toppin jump out of The Garden on any given night.

Kendall Brown’s NBA Draft combine was really strong and probably boosted his draft stock. 6’11 wingspan, second highest max vertical (.5 inch below the #1 spot at 41 inches), and 18/25 (72%) from 3 in drills

Defensive versatility: Brown is a switchable, multi-dimensional defender who allowed only 0.55 points per isolation possession last season, according to NBA.com. He has the speed to stick with guards in one-on-one situations on the perimeter and the upper body strength to hold his own against 4s in the post. Brown also proved to be a disruptive presence in passing lanes, averaging one steal per game as a Bear. He’s not a flawless defender and had his share of off-ball lapses, but has the tools and motor to become an upper-echelon stopper.

Isolation scoring: As discussed, Brown played a complementary role on offense in college. He currently lacks the outside shot, handle, and footwork to create his own shot with real consistency or efficacy. Most of his made baskets came directly off of assists. Don’t bet on Brown becoming a go-to scorer anytime soon; it’s not part of his skill set or mindset.

Outside shooting: Admittedly, Brown’s outside shot may be more of a swing skill than a weakness. His three-point percentage at Baylor was a respectable 34.1%. But Brown took just 41 treys over 34 games—mostly catch-and-shoot looks—an alarmingly low total for a guard who averaged 27 minutes a night. So, take the three-point percentage with a grain of salt. There are valid concerns about Brown’s shooting technique, namely its slowness. Watch any video of Brown firing a jumper, and it’s apparent how long it takes for him to release the ball following the catch.

My biggest concern for Kendall Brown is the shooting. He shot a low volume of threes this year due to the lack of confidence and hesitancy to shoot when he was open. Shot mechanics isn’t very fluid. He shot 22-66 (33.3%) on spot-up jumpers which ranks him in the 24th percentile. pic.twitter.com/RIRrnOg5Rz

Playmaking: Brown projects as a below-average NBA facilitator. His assist metrics at Baylor left a lot to be desired—he averaged 1.9 dimes compared to 1.7 turnovers, nearly a 1:1 assist to turnover ratio. Brown often cracked under the pressure whenever he had an opportunity to be the primary handler for Baylor. He has a habit of forcing passes through imaginary windows, highlighting his limited playmaking I.Q. Couple Brown’s questionable decision-making with his often loose handle, and it’s difficult to imagine he’ll be more than an opportunistic playmaker in the pros.

Great help defense by Kendall Brown, and then he turns it over by doing what he's done multiple times in this game:

Seeing the right pass, but not delivering it accuratelyearly enough. pic.twitter.com/sYeNdF0ooc

Though Brown is unpolished and struggles to make plays on offense, his physical gifts should make him a first-round pick in this year’s draft. Ultimately, he has the potential to be an uber-impactful role player on both ends of the floor.

There’s no real consensus among draftniks as to when Brown will hear his name called. Some boards say he’s a mid-first-round pick. Others predict Brown will be one of the last picks in the first round. Remember, the Knicks own picks 11 and 42. Because of this, a Brown–New York partnership is likely not meant to be. The ‘Bockers should have more established prospects available at pick 11, and Brown will likely be gone before they pick again.

»READ: Can Dyson Daniels be another young, upside asset for the Knicks?

»READ: Jeremy Sohan: the most versatile player in the NBA Draft