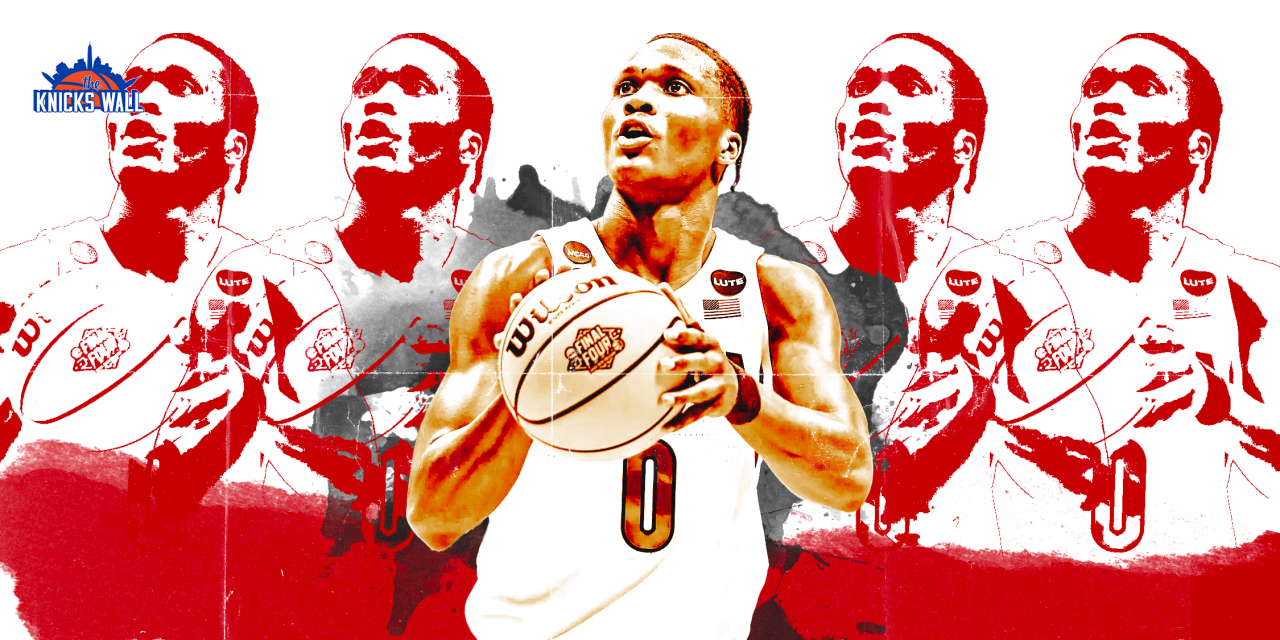 Sweet-shooting Arizona swingman Bennedict Mathurin could very well be available for the Knicks at 11 in the 2022 NBA Draft should the Knicks choose to solidify their wing depth with another top Canadian prospect.

Just about nothing gets Knicks fans going these days like talented players showing interest in playing for the team. Remember when Zion Williamson gushed about the bright lights of Madison Square Garden back in April of 2021, months before an injury and ensuing setbacks to said injury would keep him out of action—save a 360 dunk in warmups—for what is now over a year? Fans were ready to paint the town Spartanburg Day School red, preparing for his imminent arrival and his inevitable reunion with Duke teammate RJ Barrett. Despite Zion’s intentions to sign his looming extension with the Pelicans, fans are still holding out hope that the franchise savior they believed was wrongfully snatched from their lottery-bound clutches a few years back will arrive with that 2021 giddiness still in tow.

Perhaps it’s time that they move on to yet another athletic stud, one who shares a sort of Zion-esque enthusiasm about the idea of playing in New York. “It would be fun, to be honest,’’ Arizona’s Bennedict Mathurin said last week, per Marc Berman of the New York Post. “A lot of people coming to the games. I played in front of Tucson and it’s kind of crazy, but playing in front of the Garden would be so crazy. They have good players, RJ, Julius [Randle], Immanuel [Quickley], they have pieces, a pretty good team with talent.’’

Not only is Mathurin’s general attraction to MSG and the players who call it home worthy of some hype. As is the fact that New York appears to be a consensus possible landing spot for the Arizona guard. According to NBA.com’s latest consensus mock draft, in which they compile “the best mock drafts around the web,” Mathurin lands with the New York Knicks at pick no. 11 in three drafts, just one short of the four drafts he lands with the Trail Blazers at pick no. 7.

It’s interesting, the differing results for the Knicks across a variety of mock drafts. For the most part (aside from the league’s consensus collection), mocks tend to prefer the likes of Jalen Duren or Jeremy Sochan for the Knicks—a big man with some perimeter abilities and perhaps a player who can back up or play alongside Julius Randle (and eventually replace him), respectively. But a player like Mathurin, one with athletic guard tendencies who shows flashes of swingman skill, might be an even better fit alongside the players New York apparently views as untouchable.

Not only would he fit well next to RJ Barrett, but he has a preexisting relationship with the Knicks’ cornerstone guard; he knows him from having played against him in Toronto over the years. “His French was a little bit rough because he’s been in New York, but it’s actually pretty good,’’ Mathurin said of his Canadian countryman.

Barrett’s athleticism has long been an evolving aspect of his game. For Bennedict Mathurin, it’s one of his main calling cards, perhaps why the idea of that duo in the backcourt seems to cause a bit more salivation for this particular writer than that of Barrett tossing to Duren in the low post. Mathurin brings to the table what Barrett is still ironing out a few years into his career: a confident shooting stroke, both in spot-up situations and off the dribble, as well as athleticism that, while raw, has the potential to spike on par with the likes of Donovan Mitchell (who is often compared to Dwyane Wade, for what it’s worth).

But it all starts with his scoring ability, which starts with his shooting. Mathurin averaged 17.7 points per game at Arizona last season and shot 36.9% from deep. He has the kind of elite scoring ability that should help make for a quick-if-not-seamless jump from college to the pros. And thanks primarily to his range and ability to quick release, which helps him shoot over lengthier defenders, his leap should inch a bit closer to seamless than merely quick.

Mathurin’s shooting stroke is, simply put, gorgeous. It’s crisp, clean, formatted well for a player of his size and ability, and none of his shots feel forced (even when they are, but it’s just so pretty!). It’s a shot that has shades of Jamal Crawford and Caris LeVert baked within its mechanics, a clean release from a high release point. It seems untouchable, and oftentimes, it is. Feel free to try to rise up to snatch it out of thin air; either you’ll fail to altogether, or Mathurin will fake you out and blow past you. He has that in his game, too.

That aspect, however, requires some work, despite the best flashes he’s shown in that regard. Mathurin’s athleticism is at its best when he’s on the break with nothing but the bucket on his horizon. When it makes an appearance in set offenses, it’s a bit more uncertain. He averaged 1.8 turnovers last season, many of them coming on errant drives or as he attempted to create in traffic. He can be careless with the ball, especially when he drives into contact. His best moments as an attacker have more than enough flair to outweigh the slip-ups, at least visually. But pro defenses will collapse on him much quicker than Pac-12 defenses could ever dream of; he could part Washington’s interior defense like the Red Sea, but what happens when the dam that is Draymond Green steps up to close that path off?

There’s room for Bennedict Mathurin to improve that area, but he should have plenty of time to do exactly that—improve—once he makes the jump to the pros, no matter where he ends up. His shooting might allow him the time to develop a secondary game on the perimeter, that of a creator. He could start as a spot-up marksman that receives passes off of drive-and-kick sets, and he will more than likely thrive as a pick-and-roll ball-handler. Mathurin can stop and rise up for a shot on a dime, and off of hard NBA screens from the likes of Julius Randle or Mitchell Robinson, chances to create should come in bunches.

What Mathurin will need to spend most of his time developing, though, is his defense. His effort and intensity on that end have been marked as inconsistent at best. He also tends to be a bit of a ball watcher, which causes him to get lost on the defensive side of the ball, and because he’s so ball-focused, he tends to give up a bevy of offensive rebounds due to a reluctance to make contact with his man. It also could be his slighter frame; he’s hardly a pipsqueak, but he’s also not much of an immovable mass. He can get bumped off his spot by stronger opponents, thus allowing an offense to snatch easy second opportunities from his clutches.

Mathurin’s athleticism, however, helps to make up for some of what lacks on defense, particularly on the perimeter and in the passing lanes. The Ringer’s Kevin O’Connor described Mathurin’s defensive game as having “NFL-cornerback vibes … with the way he intercepts passes or strips driving attackers.” Fitting, given that he played football in the past. Hockey, too. He credits both as games that improved his physicality and dominance against contact. He could benefit from applying those skills a bit more on the court, but he has time, and he has the foundation to get him there eventually.

On top of it all, Mathurin appears to fit the “great head on his shoulders” cliché, primarily in how he’s handled the pre-draft process. In interviews, he’s made it clear that for him, “it’s about going to the right spot, not going high or low.” He’s also confident, but not in a detrimental sense. He believes his shooting is the biggest piece of his game, but still makes sure to note his two-way impact as a point of emphasis. At the combine, several teams asked players to draw up plays during their interviews; according to The Athletic’s Mike Vorkunov, Mathurin drew up a game-winning play for himself. Vorkunov also noted that Mathurin was pointed in his own line of questioning for teams interviewing him, asking them about the players they are looking to draft, especially at his position. He wants to know “how they’re going to impact me on the team and how they’re going to help me bring winning to the team. As I am a winner, I’ll be able to impact both ways, defense and offense.” There’s that undying two-way confidence again.

The way I see it, Bennedict Mathurin sounds and plays a heck of a lot like Anthony Edwards, a similarly athletic, if raw, young star whose improvement this year was hardly foreseen as being as remarkable and evident as it turned out to be. Mathurin has a similarly smooth vibe to his game, a gliding effortlessness that must infuriate opponents. “How does he play with such ease?”, they wonder.

I’m still aiming to figure it out myself. But no matter where he ends up, it will be a thrill to watch. If it’s with New York, it will be a joy to watch up close.