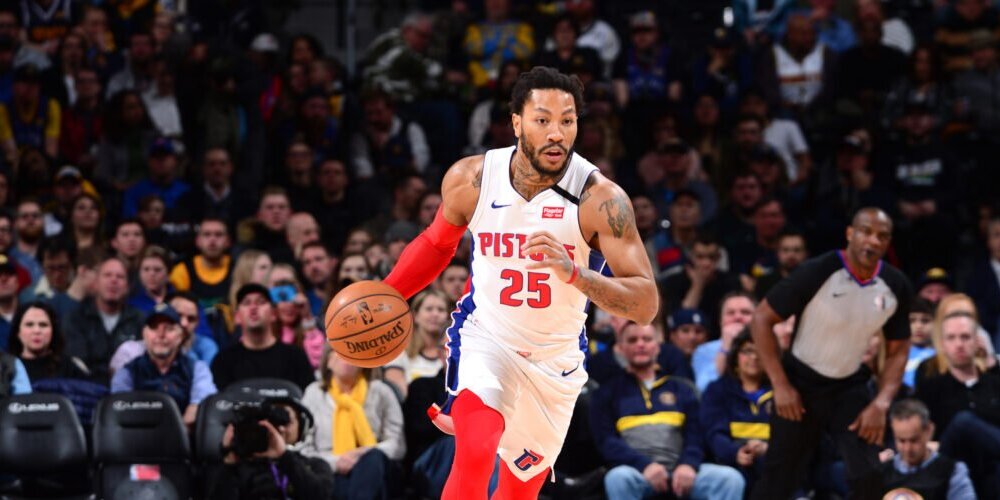 The Knicks are dealing for Derrick Rose (again), this time in an agreed trade for the one-time MVP point guard with the Pistons.

The New York Knicks have agreed to a trade with the Detroit Pistons, principally sending former NBA MVP Derrick Rose to the ‘Bockers, per Shams Charania of The Athletic.

According to Charania, the Knicks are sending fourth-year point guard Dennis Smith Jr. and draft compensation to acquire Rose. Smith was set to join the Westchester Knicks in the G League bubble in Florida. It is unclear whether the former NC State guard will play in the G League for Detroit or not. Pistons affiliate Grand Rapids Drive opted out of the bubble.

The Detroit Pistons are nearing agreement on deal to send Derrick Rose to the New York Knicks for Dennis Smith Jr. and draft compensation, sources tell me and @JLEdwardsIII.

ESPN’s Adrian Wojnarowski reports, along with Smith Jr., the Knicks are sending a 2021 second-round pick (via Charlotte).

Rose, 32, has not played for the Pistons since the end of January, as the one-time Chicago Bulls All-Star and Detroit have jointly looked for a new destination for the point guard. In 15 appearances this season—all of which have been off of the bench—Rose has averaged 14.2 points, 1.9 rebounds, and 4.2 assists in 22.8 minutes per game, shooting 42.9% from the field and 33.3% from three-point range.

Charania and James L. Edwards III in The Athletic reported on February 6th that the Knicks were “engaged” in talks with the Pistons on a trade surrounding Rose, who was seeking a new home and playoff contender. After Saturday’s home win over the Portland Trail Blazers, New York moved to a three-team tie for sixth place in the Eastern Conference while Pistons, led by former Coach of the Year Dwane Casey, are the bottom-feeding last-place team in the East.

Rose played for the Knicks during the 2016–17 campaign. A roller-coaster tenure, the former top-overall pick of the 2008 draft started his ‘Bockers career by missing part of training camp and preseason with litigation in Los Angeles. A civil trial in L.A. saw Rose accused of rape by a woman who sought damages. During the trial, Rose testified that he could not answer what consent means, per Jeff Zillgitt in USA TODAY Sports, as the woman alleged Rose and two friends raped her while she could not provide consent.

Rose later went AWOL on the team, missing a January 17th game with the New Orleans Pelicans, later explaining he needed to attend a family issue, per Ian Begley, then of ESPN.

Wojnarowski also adds in his report that Knicks veteran combo guard Austin Rivers is now on the trade market, with contenders looking to add the former Rocket.

The Knicks first acquired Rose in June 2016 when then-President Phil Jackson traded for the Bulls mainstay floor general, sending José Calderón, Jerian Grant, and Robin Lopez for Rose, Justin Holiday, and a future second-round pick. Rose was paired with free-agent signing Joakim Noah, his longtime Bulls compadre. In 64 games with the Knicks, Rose averaged 18.0 points, 3.8 rebounds, and 4.4 assists in 32.5 minutes per game, shooting 47.1% from the floor and 21.7% from long range.

After Rose’s contract expired, he signed with the Cleveland Cavaliers, before getting traded seven months later to the Utah Jazz, where he was waived. Rose reunited with Tom Thibodeau, who won Coach of the Year the same season as Rose’s MVP campaign, with the Minnesota Timberwolves, appearing in 60 games across two seasons. Rose finally landed with Detroit in 2019 as a free agent.

Rose’s arrival immediately calls into question the impact of playing time for emergent rookie guard Immanuel Quickley, one of the top first-year scorers of his class. Quickley has not yanked the starting point-guard job from Elfrid Payton yet, so the presence of Rose leads to the uncertainty of Quickley’s development and minutes for the Knicks.

This story is developing and will be updated.

»READ: A Derrick Rose trade is not the answer for the Knicks