Knicks Again Sputter Out at Home to Magic 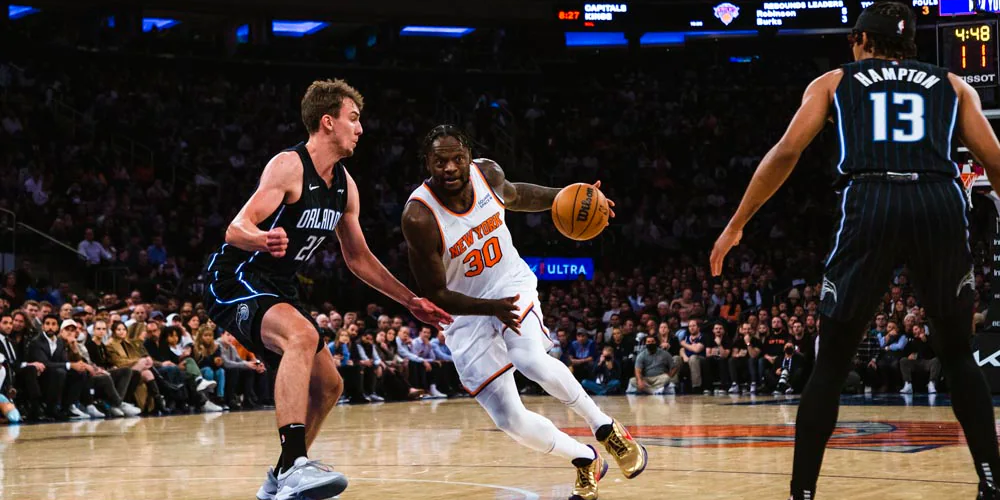 The Knicks played down to their opponent again, letting the Magic set the tone in a close loss at home, inching closer to .500.

The New York Knicks (8-7) were out-hustled once again by the Orlando Magic (4-11) and lost 104-98 for the second time at home against this young club.

For the Knicks, center Nerlens Noel sat out again with a lingering knee issue, but Mitchell Robinson was back in the starting lineup after busting through yet another pair of kicks during their last game against the Pacers where he had to leave with a related injury.

The Knicks were coming into the contest trying to erase the 22-point fourth quarter from Terrence Ross from memory during their last game against Orlando, which was a loss. The Magic’s star sophomore Cole Anthony also went on a tear in their last meetup, scoring 29 points and pulling down a staggering 16 rebounds to boot.

The first quarter started off fairly evenly with both teams looking rusty. Orlando’s Wendell Carter Jr., who came into this game with a 46.3% three-point shooting percentage, was left open twice and made the Knicks pay. Otherwise, New York held their ground defensively and looked good on single coverage. Julius Randle got the Knicks’ scoring started with a three-pointer at the top of the key and the starters overall looked a lot more fluid than in recent games. However, the lid on the basket from their last game against the Pacers seemed to have returned, but both teams were suffering the consequences.

As the quarter wound down, the Knicks were shooting just 33% from the field on 30% three-point shooting, while Orlando was an abysmal 13% from three with 35% shooting from the field. Magic center Mo Bamba looked to be a killer early on, cleaning the glass efficiently and getting over the likes of Taj Gibson and Robinson for easy put-backs.

The second quarter started off with a block from Derrick Rose, a three-pointer from Immanuel Quickley, and a beautiful reverse layup from Alec Burks. That backcourt trio once again provided the bench with reliable play-calling and ball movement which translated early to points and momentum for New York. But Bamba continued to devastate New York on the glass, with unstoppable put-backs and helping generate other second-chance shots for the Magic. Bamba, with 10 points and six rebounds, and notorious “Knick killer” Terrence Ross, who started to heat up in the second quarter and finished with 15 points in the half, were Orlando’s leading scorers at the break.

New York did not really have much to write home about in the first half. While they were not giving up as many shots as usual and were typically contesting shots, they just could not get their own shots to fall. They were settling for many three-pointers instead of driving to the basket, unlike Rose and Alec Burks who were aiming to draw contact. New York’s top scorers were Randle with 10 points and Robinson with eight points. Robinson also had an impressive three blocks and seven rebounds to go along with his efficient scoring half.

The third quarter, which has become a question mark for the Knicks’ starters, started off more or less with the lackadaisical energy and poor shot selection. The Knicks were shooting just 28% from three on terrible looks and barely looked to drive at the basket. Robinson seemed to be the only ‘Bocker willing to score in the paint. By the eight-minute mark in the third, he had already tied his season-high with 11 points. As the Knicks struggled from deep the Magic started to get some better looks, and their lead stayed put halfway through the quarter.

Randle was trying to get it going, but he shot more three-pointers than mid-range shots or anything near the rim. RJ Barrett, who has been in a slump as of late, also tried igniting some passion from the Knicks with a nice and-one finish after getting a no-call on the previous play where he was seemingly obliterated by Bamba.

Heading into the fourth, things looked bleak for New York. They were outscored 29-26 in the second quarter, and 22-18 in the third. They needed a clean and efficient fourth to try and come back against a young, hungry but struggling Orlando team. A lineup of Burks-Rose-Toppin-Barrett-Robinson helped pull within three points of the Magic early in the fourth despite answers from Orlando on the offense.

The true star of the fourth was Obi Toppin. He finally got something going from beyond the arc, going 2-of-2 from deep and getting the Knicks within one point. Coupled with some clutch shots again from Burks, the Knicks finally reclaimed the lead with around seven minutes to go in the game. But, stops are what New York needed to get, and Suggs for Orlando started heating up from three.

With around four minutes left in the fourth, Robinson had a great put-back to push the Knicks lead to three. He dove for a loose ball off of a Burks miss and was able to get it out to Barrett, but he landed hard and awkwardly on his hip and had to come out of the game. Head coach Tom Thibodeau went with the rarely deployed small-ball lineup of Toppin-Randle-Barrett-Burks-Quickley. Immediately out of a timeout, Ross had a steal off a Quickley pass and slammed it home to put Orlando up one, 95-94. Eventually, off of another steal by the Magic, they pulled away and stole another game in Madison Square Garden.

Turnovers were truly the theme of the night for the Knicks and they led to 21 points off turnovers for the Magic. They turned the tide in what would have been a relatively low-scoring but in-reach win for New York into a chase that should not have happened to begin with for the Knicks.

Barrett, with 17 points on 7-of-19 shooting, was the Knicks’ top scorer. He also had nine rebounds and five assists. Randle and Robinson both wound up with 13 points. Randle went 4-for-11 from the field with 10 of those shots from three. Robinson was the most impressive starter for the night as he grabbed 11 rebounds.

Burks finished with 15 points, four assists, and five rebounds. Toppin had 14 points in 17 minutes of play, as well as five rebounds. Rose looked off-kilter in his ball-handling tonight and finished with a team-high five turnovers, but did have 10 points on 4-of-9 shooting. Quickley was solid with six points, seven assists, and just a single turnover in 24 minutes. Gibson had a quiet three blocks but was largely ineffective tonight in relief of Robinson.

New York will finish this homestand on Saturday against the Houston Rockets. They’ll try to avoid falling to .500.