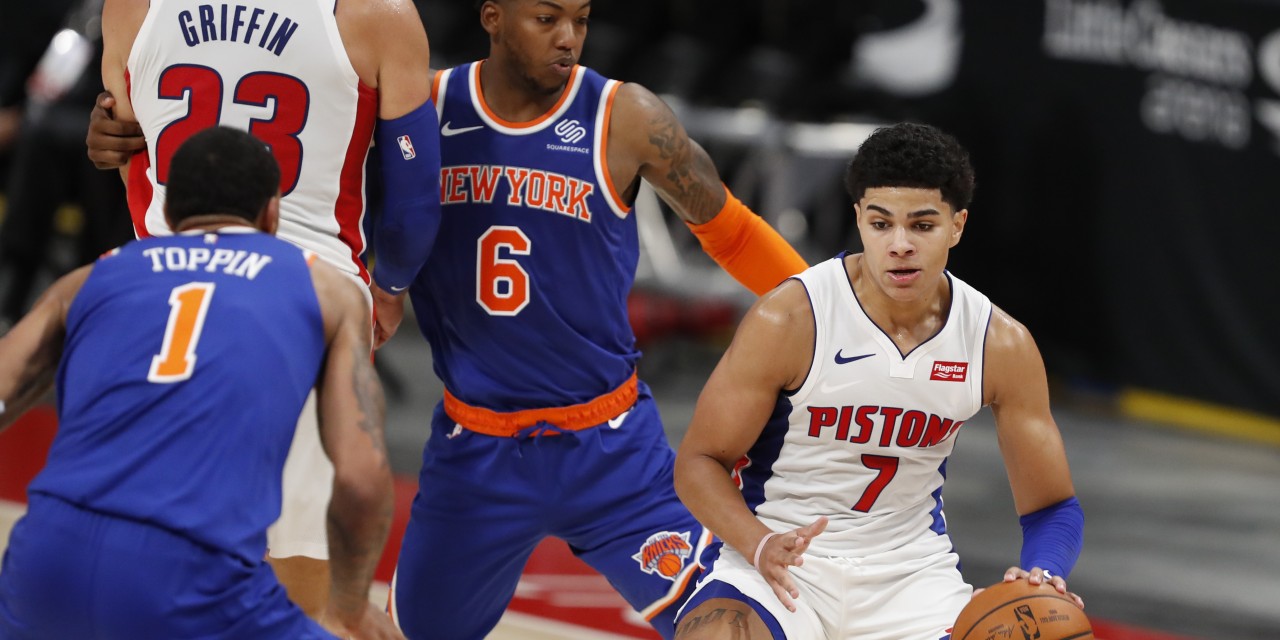 New York will attempt to replicate a stupendous collective effort on the defensive end after they held the Pistons to a mere 84 points Friday.

Following a nine-month hiatus (which felt more like a lifetime), the New York Knicks made their return to the hardwood Friday night. New York’s adversary? The Detroit Pistons.

Detroit’s roster is revamped from the season prior, as Chrisitan Wood bolted to the Houston Rockets in free agency, and promising lefty Luke Kennard was dealt to the Los Angeles Clippers via trade. Wood and Kennard were both offensive focal points for the Pistons in 2019–20.

As a result of the roster turnover, Detroit signed Mason Plumlee, Jahlil Okafor, and Jerami Grant during free agency to shore up their frontcourt. Additionally, the Pistons drafted point guard Killian Hayes with the seventh overall pick in the 2020 NBA Draft, and he projects to be a major component of the team’s future.

Detroit’s recent acquisitions struggled mightily in their debut. The aforementioned signees combined to convert just seven of their 22 total field-goal attempts. The Pistons as a team did not fare any better, shooting 32.5% from the field and 25.6% from distance. All in all, there weren’t many positives for the Pistons in this one, at least on the offensive side of the ball.

What about the Knicks, you ask? Well, considering New York held the Pistons to 84 and won by only six points, it’s safe to say the offensive firepower of this team was lackluster at times. But that should have been expected; players have gone months without participating in organized basketball and are inevitably rusty. A win is a win regardless of how New York fared scoring the rock, and the team can credit the play of one of their rookies, along with the rim protection of their bigs, for starting off the preseason with a bang. These aspects from Friday’s outing are what the Knicks should aspire to carry over to Sunday’s affair.

The Knicks decisively outscored the Pistons 52-30 in points in the paint on Friday, thanks large in part to Noel and Robinson. The two behemoths combined for four blocks, and numerous contests at the rim. All night long the Pistons persistently took the ball to the rack, yet had little success scoring inside.

Noel was part of the Knicks’ starting unit Friday, and when he sat, Robinson took his place on the court. The Knicks employed either Mitchell or Nerlens at the 5 for 47 of the 48 minutes, which paid dividends.

The pair of youthful bigs are a less than ideal pairing on the court together due to their inability to space the floor. But plugging in one at a time to defend the goal and finish above the rim is a sensible strategy, and one that could benefit the Knicks during the regular season. Competent rim protection is under-appreciated, and arguably a lost art in today’s pace and space style of play. But Noel and Robinson proved on Friday that this attribute of old-school big men can still impact winning.

Nerlens Noel with a BLOCK pic.twitter.com/hARaOLt6tx

Keep an eye out for whether coach Tom Thibodeau continues to evenly distribute run time between the Knicks’ two traditional centers or not. Robinson played 22 minutes on Friday and Noel 25, and I expect them to taste the court nearly the same amount Sunday. If it ain’t broke, don’t fix it. After all, the Pistons were out of sorts offensively for the entire evening thanks to their intimidating presence down low.

How much time will Obi Toppin get after shining in his Knicks debut?

Chances are if you know anything about what transpired during the Knicks’ preseason opener, it’s that rookie Obi Toppin excelled off the pine. In 20 minutes versus the Pistons, he accumulated 11 points and seven rebounds. The manner in which he scored is what was most impressive about his debut: he demonstrated a polished post and face-up game with an array of pretty finishes that were of a high level of difficulty.

Despite the fact that six Knicks played more minutes, Toppin led the entire team in free throw attempts on Friday with five. Obi served as instant offense for New York, and considering he took nine shots in 20 minutes, Knicks faithful need not fret about Toppin’s confidence. Toppin knows he belongs in the NBA, and almost a year’s worth of time off from basketball hasn’t damaged his trademark swagger and confidence which made him a dynamic scorer at Dayton.

Coach Thibodeau opted to roll with the Knicks’ veteran talents in the starting five on Friday in lieu of youngsters such as Toppin and Robinson. If Obi continues to be an efficient microwave scorer off the bench, it’s hard to imagine that he’ll stay in a reserve role for much longer. This Knicks group isn’t exactly flush with players who can create scoring opportunities for themselves or others, and considering the team’s rough showing in the scoring department Friday, Thibodeau would be wise to hand Toppin the keys to the car sooner rather than later.

Succinctly put, Toppin looked the part of former Knicks star, Amar’e Stoudemire. With high-flying athleticism, a soft touch around the basket, and a reliable perimeter jumper, Obi can practically do it all in terms of putting the ball in the basket, just like Amar’e.

It will be interesting to see if Toppin receives an uptick in minutes or usage on Sunday.