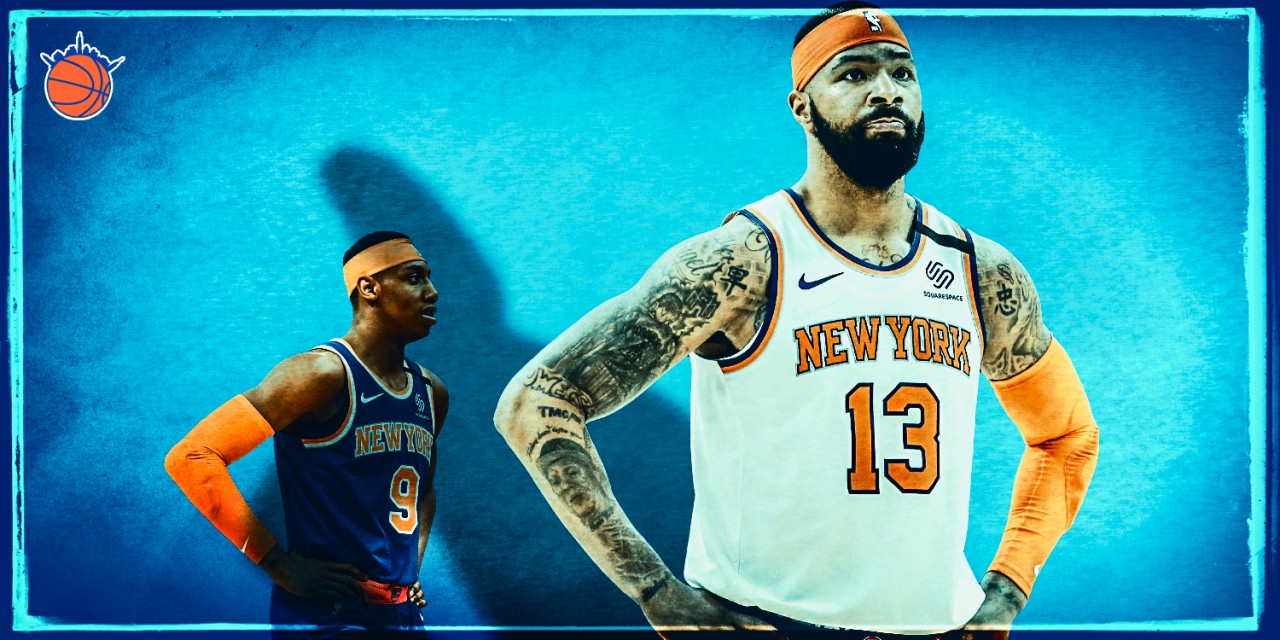 It’s been another lost season for the Knicks, and time is slipping to actually prioritize the younger players who need playing time.

“Luck is a very thin wire between survival and disaster and not many people can keep their balance on it,” Hunter S. Thompson wrote.

Coming into this season, it was clear that one of the biggest challenges the Knicks would face throughout the year was how to balance desperately needed development of the young guys with expected playing time of the many overpaid veterans flooding the roster. In a way, this has been one of Scott Perry’s biggest weaknesses as a general manager, stemming back to his brief time in Sacramento, where he decided the best thing for his speedster rookie point guard would be to sign 36-year-old Zach Randolph to a two-year, $24 million deal and 31-year-old George Hill to a three-year, $57 million deal. The fit was… not perfect.

So, with the Knicks just past the halfway point of the season, let’s check in to see how the balancing act has gone.

This is a disaster

Yeah, that sort of sums it up. The Knicks, having apparently learned nothing from previous seasons’ mistakes, refuse to stop chasing short-term wins, usually in vain, at the expense of the development of the young players on the roster, despite being 11-32 and firmly ensconced in the 14th seed. Even worse, they seem to be trending the wrong direction.

Not only did the Knicks lose to fall 21 games below .500, but Reggie Bullock, Mook Morris, Elfrid Payton and Taj Gibson each logged more than 24 minutes.

Dame Dotson and Iggy were DNP-CD's

It’s tempting to look at the starting lineup from Saturday night’s surprisingly competitive game against the Sixers and say the Knicks are just trying to boost the value of their vets before the February 6th trade deadline, and maybe that’s the case. But even with that built-in excuse, the playing time of all the sub-24-year-olds not named R.J. Barrett on the roster cratering recently is cause for concern.

If this team were winning games and fighting for a playoff spot, the minute allocations might not be quite as glaring, but on an 11-32 team, it’s difficult to justify.

After a brief, glorious 6-6 honeymoon phase, it seems that Knicks fans are starting to turn on Mike Miller, though not nearly to the extent that they turned on Fizdale (yet). For as good, or at least just bare-bones competent, as Miller has been at installing common-sense defensive and offensive strategies, his rotations have often been as bad as his predecessor’s. So has his unwillingness to split up the disastrous Julius Randle–Marcus Morris pairing, and his insistence on playing what some who lack an irony bone might call win-now lineups.

Mike Miller is asked about Marcus Morris and Julius Randle playing at the same time pic.twitter.com/05rt2JeL7b

Now, Miller isn’t alone in deserving blame. After all, he didn’t sign three players in Morris, Portis, and Randle who would cannibalize not only each others’ minutes but also Kevin Knox’s. Miller also didn’t sign two wings in Ellington (having the worst year of his career) and Bullock (a very nice late addition to the roster who should be of interest to any team with playoff aspirations) to block any path to minutes for Allonzo Trier, Dotson, and Brazdeikis. He didn’t even make the suggestion to sign noted barely-an-NBA-player Ivan Rabb to a two-way contract, keeping defensive standout Kenny Wooten off the team until just last week (thanks for that one, Fizdale!)

All, or most, of those complaints should be directed squarely at the braintrust of Mills and Perry. Perry’s tenure in New York began with big hopes and expectations, and his stock skyrocketed when he used the second-round pick from the Carmelo Anthony trade on Mitchell Robinson. But as far as building the team the right way and not taking shortcuts go, there’s not much else in his time in New York to celebrate. Even finding Trier on the undrafted scrapheap, a rare feel-good story last season, is now an awkward and confusing mess. Couple his love for his own former draft picks from previous stints with his love for volume scorers with low feel for the game and you get a team full of guys who all want to do the exact same thing, none of whom are actually good at it.

But believe it or not, the blame doesn’t all go to Mills and Perry either. In fact, it doesn’t belong squarely in any one camp, because the truth is, this is just as much on the young guys as much as anyone. Sure, it’s not Knox’s fault that he was drafted before his much better college teammate, but it has to be partially his fault that he’s has made only nominal improvements in his second year. The same can be said of basically every young player that was on this roster last year—Dotson is as streaky as ever, Ntilikina has games where he looks like he figures out the whole confidence thing, and then goes right back to looking like the world’s scared-est boy. As infuriating as it is (and it’s really infuriating) to see 34-year-old, 6’9″ Taj Gibson man the starting center spot every night, it’s also hard to ignore the fact that Robinson’s play on both ends has been nowhere near what it should be of late, and that he hasn’t made as much progress on the mental side of the game as you’d hope. It’s the young guys’ job to make it impossible to keep them out off the floor, and by in large, they’ve failed.

All of which, of course, brings us right back to the coaching staff. First Fizdale, and now Miller, were lauded as development guys when they took the reins, yet other than a half-season of Noah Vonleh becoming a decent three-point shooter and grab-and-go guy (he’s now on a minimum contract in Minnesota getting 12 minutes a night), fans have seen little evidence to back up such assertions. So while it’s true that Mitchell has struggled in recent weeks, it’s also fair to wonder whether he might not be quite so erratic and overly energetic if he were starting games, as he expected to coming into the year. Is he fouling and jumping out of rotations because he’s pressing, trying to produce more in a limited time, or is he getting more limited time because he’s fouling and ruining defensive rotations by block-hunting? Is Kevin Knox’s one bankable skill, his shooting, slumping because he’s getting less time to build up a rhythm, or is he getting less time because he has one bankable skill, his shooting, and even that’s deserted him recently? The snake has begun to eat its own tail, as it does most seasons for this perpetual trashcan fire of a team.

Have you ever had a problem that no matter what you tried, you couldn’t solve? There are fewer things more frustrating than attacking something head-on from multiple different angles and coming up short each time.

But this is even worse. Because this problem has a very obvious answer, an answer which, coincidentally, would make the team infinitely more enjoyable to watch as we wade through this interminable season: play the kids.

Again, this is an 11-32 team. The eighth seed is a distant, fleeting dream. Morris, Portis, Ellington, Payton, and Gibson will (god willing) be elsewhere in six months time. The only way to see what you have is to see what you have. Whether it’s putting Mitch into the starting lineup permanently, splitting up Randle and Morris, or just simply giving 10-15 minutes a night to Dotson and Trier, the Knicks are going to be much worse off in the long run if they get through this season without devoting real playing time to their prospects.