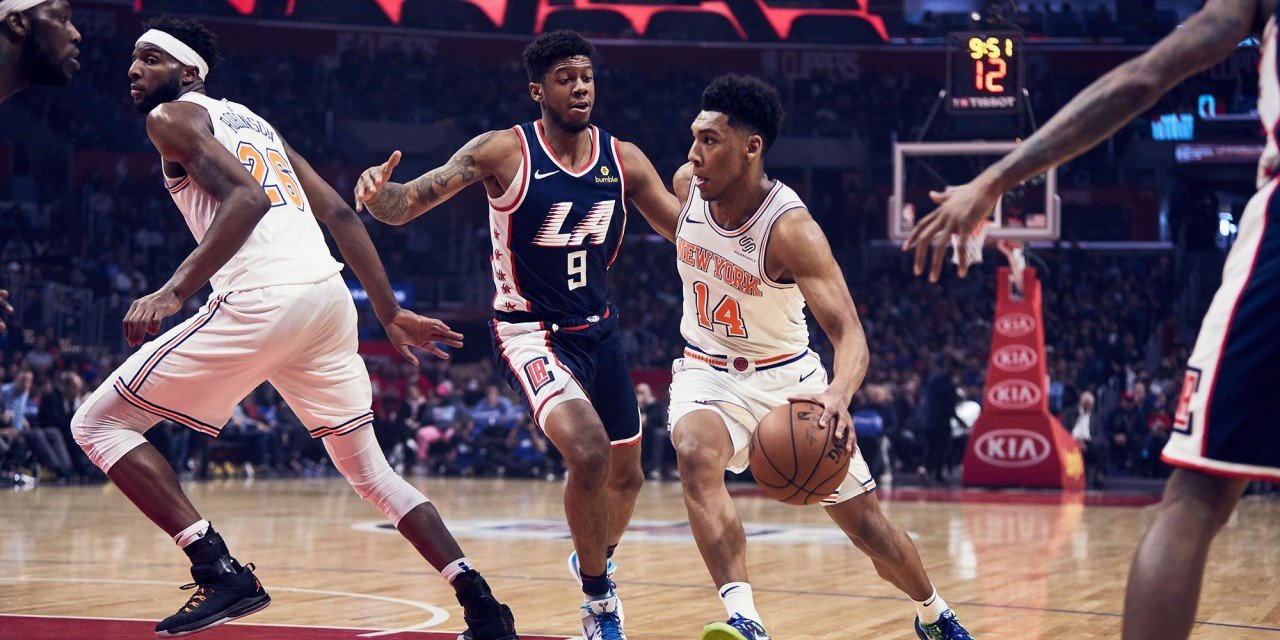 Two teams going in completely opposite directions meet for an early afternoon showdown at the Garden with the Knicks hosting the L.A. Clippers.

Prior to the season, most people would have rolled their eyes at the prediction that the Clippers would have a better season than their big brother crosstown rival Lakers.

Well, here we are.

The Clippers (43-30) have been one of the league’s most pleasant surprises this season under veteran head coach Doc Rivers and are a dangerous team heading into the Western Conference playoffs. Los Angeles has enjoyed much success recently as they look for their 10th win in their last 11 games. Without a bona fide superstar on the roster, the Clippers rely on contributions from a bunch of players who aren’t household names to say the least.

What they lack in flashy star power, they make up for in toughness, unselfishness, veteran leadership, and certainly three-point shooting.

Patrick Beverley and Montrezl Harrell set the tone in the physicality department, making life difficult for any opponent who challenges them. Beverley is an excellent perimeter defender who gets under the skin of many guards, while Harrell is relentless on the boards and isn’t afraid to bang bodies down low. Harrell’s 16.5 points per game is a career best, and he should be a tough matchup for the Knicks’ bigs, particularly Mitchell Robinson.

Complementing their toughness, the Clippers quietly rank fifth in the NBA in scoring with 114.3 points per game, per NBA Stats, and this is in large part to their excellent three-point shooting. Lou Williams, one of the best sixth men of all time, leads the Clippers in scoring at 20.2 points per game and has been money in clutch situations from behind the arc. Former Knick Danilo Gallinari also is lethal from three, along with rookie point guard Shai Gilgeous-Alexander and trade-deadline acquisition Landry Shamet, who torched the Knicks last time these two teams met.

The Clippers can beat you in many different ways, and have shown that they can win without a star player on the team. Since trading Long Island native Tobias Harris, Rivers and his crew have gone an impressive 13-5.

Recently, the Knicks have not enjoyed any success against the Clips, posting a 1-12 record in their last 13 games. David Fizdale and company look to buck that trend as this lost season winds down to a close.

After an encouraging 27-point performance a few nights back against the Jazz, Knox followed up with a solid performance 19 points against the Denver Nuggets. With Dennis Smith Jr. and Allonzo Trier still sidelined with injuries, expect the rookie to get some more shooting looks.

It’s no secret that Knox has struggled in his up and down rookie campaign, but he can silence a lot of the doubters and create a nice springboard for himself heading into next season if he is able to finish this one with some good performances strung together.

Knox has often been timid with the ball and has looked confused on both defense and offense on too many occasions. In Knox’s good performances, he demonstrated extreme confidence in shooting—especially his patented floater.

Nothing will come easy for Knox this evening against a stingy Clippers defense, but it’s important that the 19-year-old takes a page out of fellow rookies Mitchell Robinson and Allonzo Trier’s play book and competes with swagger and confidence.

This season has left a lot to be desired for Knicks brass, especially Coach Fizdale, who has grinded hard the entire season with little to show for it. Fizdale has recently looked extremely defeated on the sidelines, and doesn’t know how else to get some wins on the board.

Fiz works extremely hard, but the talent just isn’t there for this Knicks team, who “gets the hell smacked out of them” on a nightly basis by superior teams.

You can tell he genuinely cares about developing the guys he currently has, as opposed to waiting for the draft or free agency to start putting in the work. Coach has done an admirable job this season, considering the hand he has been dealt. Let’s hope the losing culture hasn’t taken too much of a toll on the first-year coach.

Look for the Knicks to come out inspired tonight, as an emotional coach Fizdale will continue to push his guys.

»READ: Fizdale and searching for identity in the big city