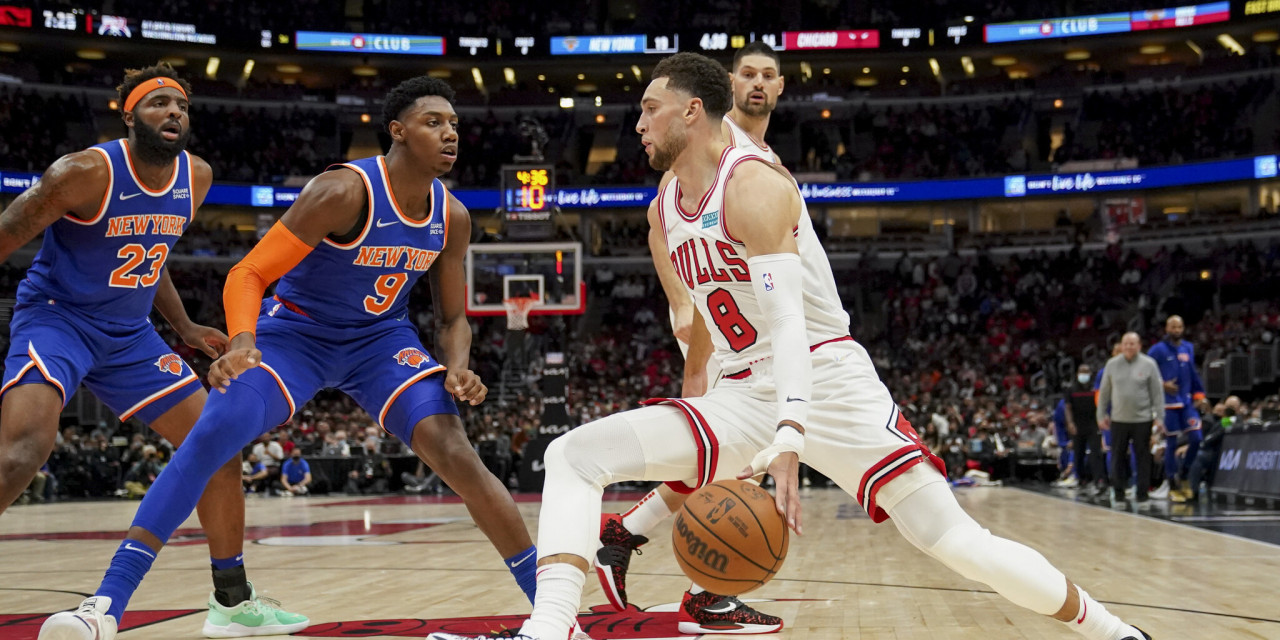 With another fourth-quarter collapse narrowly avoided, the Knicks improve to 4-1 on the young season, downing the Bulls on the road.

The New York Knicks (4-1) defeated the Chicago Bulls (4-1) by a final score of 104-103. Kemba Walker finished with a  team-high 21 points and five threes for the Knicks, while Julius Randle finished with 13 points, 16 rebounds, and nine assists. For Chicago, Zach LaVine finished with 25 points, six rebounds, and three assists. With the victory, the Knicks move to 4-1 on the season, tied for the best record in the Eastern Conference.

Celebrate the win, but the Knicks have work to do.

There was a palpable buzz for this one. On Twitter, both fanbases have been clamoring to prove that the other should be considered frauds early in the season, while most pundits placed the Knicks and Bulls in the same tier. Both made big moves over the last 18 months to revamp their rosters and front offices, both have a star player in their prime, and both have decent-sized expectations, it was supposed to be a fun one.

And at the start, it didn’t disappoint.

The Knicks and Bulls traded runs and timeouts before the game truly settled in. New York was getting offense from everyone, thanks in large in part to Randle being off to start the game. Kemba Walker knocked down a three, Mitchell Robinson converted on a dunk, and we even saw the Derrick Rose show at the beginning of the second quarter. Chicago’s electric offense, started by guards Alex Caruso and Lonzo Ball, were capitalizing off New York’s mistakes, but it didn’t matter as the Knicks led.

One key aspect to New York being able to maintain a lead was Chicago going to Alize Johnson at the 5, allowing New York to get to the rim at will.  Rose was able to get the best of Caruso at times, while RJ Barrett found himself living in the paint; even though the shot wasn’t falling, the former Duke Blue Devil lived in the paint. Also fair to mention that Evan Fournier was excellent from the outside, creating a bit of a safety valve for New York’s offense.

But the Knicks pulled away in the third. Kemba Walker started things off with two three-pointers, while Barrett, the recipient of a DeMar DeRozan flagrant foul, totaled seven points in the quarter, assisting in the Knicks pulling away. There was a stretch where the Knicks led by double digits and just sat there, as the Bulls couldn’t do much to get a basket with that energetic bounce of the first half gone.

And that’s where the trouble came.

I already spoiled it—the Knicks won the game—but the fourth quarter was a meltdown by the Knicks. From about mid-way through the third quarter to the end of the game, New York’s offense was lifeless and basic, often settling to attack the likes of Caruso and Ball on the perimeter, settling for early outside looks and just being plain ineffective. The Knicks led by double digits for much of this game, but Chicago kept punching back, getting it to six points, before the Knicks would respond.

In the end, the Knicks avoided a disaster and won, even with two missed free throws from Randle and a telegraphed pass from Alec Burks that DeMar DeRozan just missed. The Knicks were the better team for the majority of the game, but that last 18 minutes or so is something I hope to see emphasized in the postgame was unacceptable. For a team that looks very good, cleaning up those late-game situations could take them to another level. We’ll take it for now, but it’s something to keep an eye on.

Let’s go to the notes.

The Knicks fly to New Orleans to take on a Zion-less Pelicans on Saturday before returning home on Monday to play the feisty Raptors.