Knicks Back in Action Against Andrew Wiggins, Timberwolves in Minny 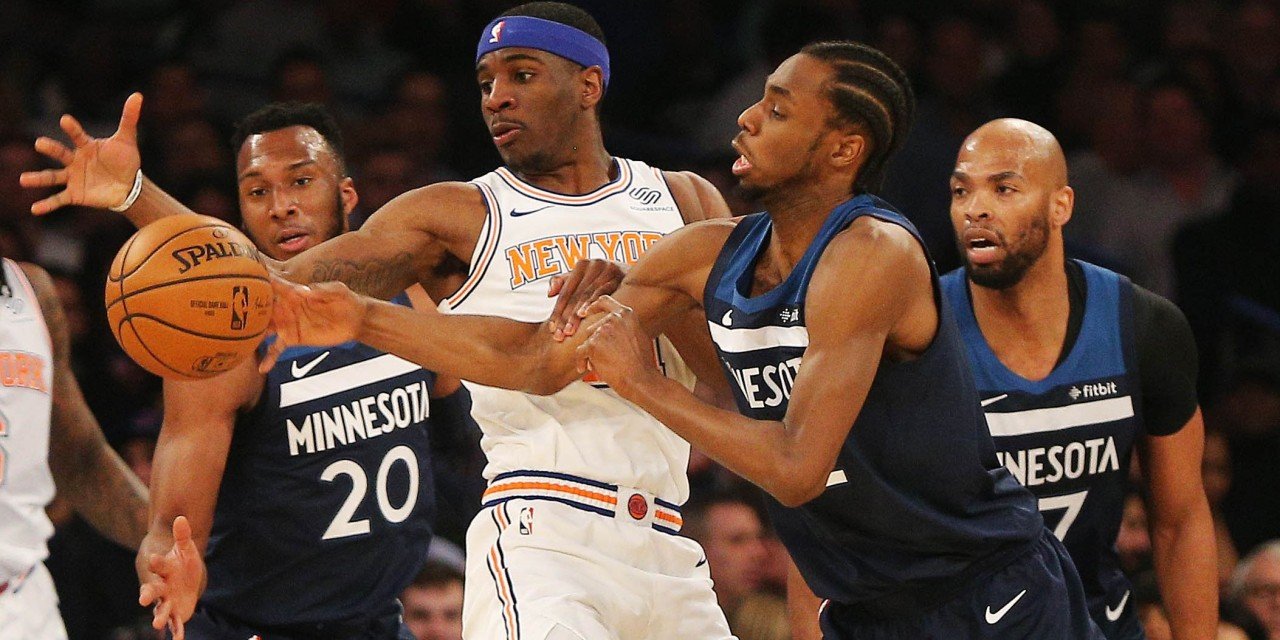 Now on a five-game losing streak, the New York Knicks travels to Minnesota to take on the Timberwolves.

At one end of the spectrum of yesterday’s news, we have the Minnesota Timberwolves (31-35) beating the Wizards in overtime, led by the franchise cornerstone Karl-Anthony Towns. At the other end, we have the New York Knicks (13-53), who despite losing again, made headlines for their notoriously thin-skinned owner’s remarks towards a fan.

New York is coming off another deflating defeat, this time against the Sacramento Kings. With a final score of 102-94, the game didn’t feel nearly as close as the box score suggested. New York fell behind in the third quarter and then surged back in the fourth behind a frontcourt of Mitchell Robinson and Luke Kornet. The result of the game, however, was predictable.

Karl-Anthony Towns left the game in the fourth quarter against the Wizards, but dominated offensively to score 40 points, grab 16 rebounds, and hit four threes in just 37 minutes of play. It was Towns’ sixth career 40-point, 15-rebound game. In his last seven games, Towns has been sensational, averaging 35.1 points, 14.3 rebounds and hitting 23 triples during the stretch.

After sustaining a non-serious knee injury, per Wolves head coach Ryan Saunders, Towns will have to receive further testing before returning to the court. He remains questionable against New York.

New York fell to 40 games below .500 on Saturday night. The Knicks shot 37.2 percent from the field against the Kings, which was mostly a result of horrible ball movement. The ‘Bockers also happen to be last in the league in assists per game, averaging just 19.9 per contest.

After ridding its soul of Tim Hardaway Jr. and Trey Burke, the team’s ball movement has marginally improved, if at all. Fizdale has directly addressed this issue with the team, mentioning players who are fighting for their next contracts.

“When you’re dealing with guys fighting for their contractual life, you’re always going to have an element of where a guy can be more focused on trying to get his,” Fizdale told reporters. “Not that we’ve had a lot of that, but it’s just a natural thing when you’re fighting for your life.”

In his last eight games since returning from an injury, Mudiay has remained a Fizdale favorite with Frank Ntilikina still on the sidelines. Averaging nearly 24 minutes of playing time, Mudiay hasn’t wowed, but he also hasn’t disappointed entirely.

A noticeable difference in his game is that Mudiay hasn’t attacked the paint as aggressively as one would hope. In fact, Mudiay has only gotten to the line 13 times in the last eight games. To put that in perspective, he’s attempted 24 threes in that same span.

Although his playing time has changed since the arrival of Dennis Smith Jr., Mudiay is clearly fighting for his next contract. Per Marc Berman of the New York Post, the Knicks are still evaluating whether to retain the restricted free agent.

In reply to Fizdale’s contractual comments, Mudiay seemingly agreed to what was said.

“I don’t think it’s coming from a bad place. People are out here trying to survive,” Mudiay said. “It’s just human nature sometimes when things ain’t going right, you feel it upon yourself to make something happen.

If Towns sits against the Knicks, Gibson will most likely get the nod to start at center. In the two games that he’s replaced Towns, Gibson totaled 39 points and 16 rebounds. While he was not quite as good as Towns last night, Gibson still put up adequate replacement-level numbers when called upon.

In his five games since returning from an injury, DeAndre Jordan has resumed his starting center duties and has averaged 13.8 points and 13.2 rebounds in roughly 27 minutes per game. Old (relative to this Knicks roster) and reliable are two ways to describe Jordan. At this point in his career, one may frequently question his defensive efforts, but his on and off the court contributions haven’t gone unnoticed.

Mitchell Robinson continues to be a tour de force. Here is an excerpt I wrote about Robinson just a short week ago:

“Perhaps having a mentor in DeAndre Jordan has upped his play. Jordan is a two-time All-Defensive First Team, two-time NBA rebounding leader, and All-Star, who was also mentored by Marcus Camby. That’s lots and lots of knowledge to pass along to another talented, young big in Robinson.”

Jordan will get his fair share against Gibson, but Robinson will also get minutes against the veteran big, who is bound to teach him several lessons regarding ticky-tack fouls.

Kevin Knox and his slump

The rookie wall is a phenomena with which Knicks fans are all too familiar. Now 71 games into the season, Knox has made it obvious that he just isn’t in good enough shape, and it’s not his fault. The college basketball season is much shorter and much less arduous. The NBA season is unforgiving, and the 19-year-old Knox continues to falter in the last stretch of the year.

Knox has been historically bad, however. Although one can lean on a statistic that creates hope, such as Frank Ntilikina’s elite defensive numbers in his rookie season, Knox has been baaaad in almost every category. Per Fizdale, he’s not sure what’s going on, but he’s confident in Knox’s ability to break out of this rut.

“But at the end of the day, the kid is busting his hump to get out of the rut, and I think as we go down the stretch here, we’re gonna see some better play from him,” Fizdale said.

If anything, against the Wolves who don’t bolster any special defensive talents, Knox will continue to get his shots up. Most notably, however, Knox needs to pass the ball better and create more opportunities for his teammates.