Knicks Back to the Grindstone With Embiid-Less Sixers Matchup 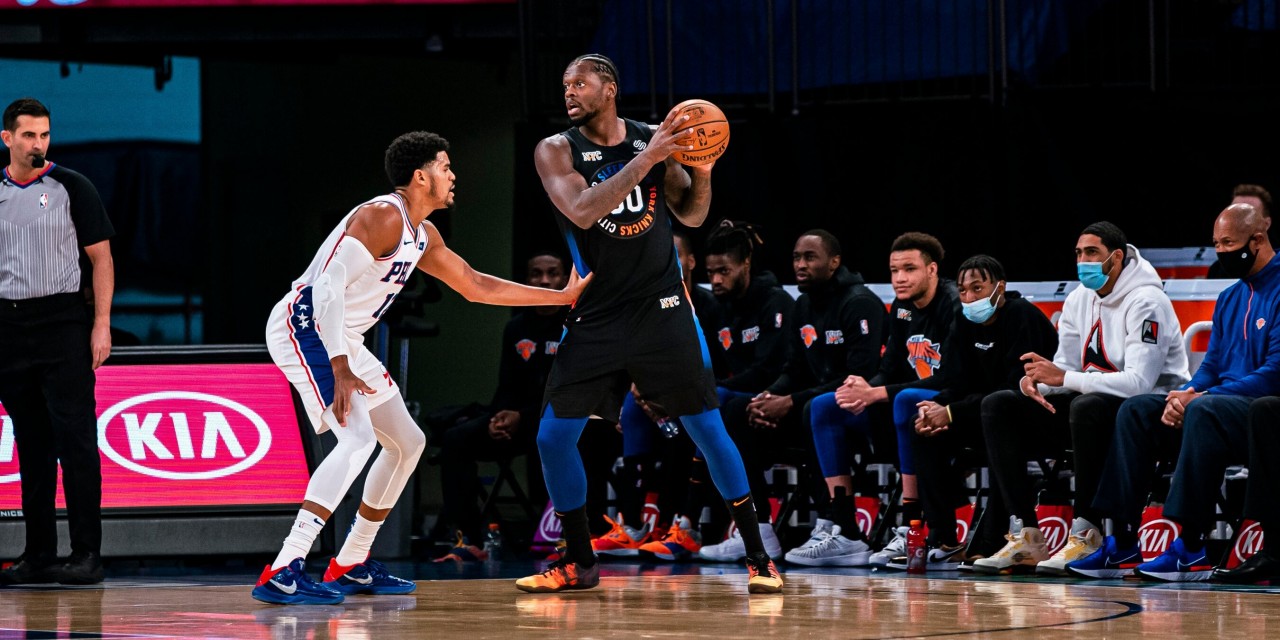 Having lost an extremely close game in Brooklyn last night, the Knicks travel down I-95 to face Ben Simmons and the Sixers with a .500 record on the line.

The NBA season continues, and things are getting interesting.

Last night was a loss, but it was a proper loss if that makes sense. The New York Knicks (20-20) were supposed to lose to the Brooklyn Nets. One team is an Eastern Conference powerhouse, while the other is still figuring things out. All in all, New York’s 117-112 loss came with some exciting moments, from Immanuel Quickley’s first career start to R.J. Barrett’s continued progress and feisty leader Julius Randle needing to be held back at the end of the game after a questionable call.

It was a game, but one from which to glean positives. Nature is healing, and in the words of former Knick (and current Nets assistant coach) Amar’e Stoudemire: The Knicks are back.

However, the season doesn’t stop there. Off the heels of a tough game against the Nets, the Knicks continue to battle against the best of the East, traveling to face the Philadelphia 76ers (27-12). The last time these two teams played was a 109-89 victory by the Sixers in New York’s second game of the 2020–21 season. Since then, well, things have changed a bit for the Knicks and their regular season aspirations.

Show Me My Opponent

Philadelphia remains one of the Eastern Conference’s best, but this go-around will be without star center and MVP front-runner Joel Embiid. Averaging 29.9 points, 11.5 rebounds, 3.3 assists, 1.2 steals, and 1.4 blocks per game, Embiid will be out with a bone bruise. Still, the Sixers have Ben Simmons, an All-Star point-forward, to hold things down. Not only does Simmons fill the stat sheet—16.0 points, 7.8 rebounds, and 7.7 assists—but he pairs that with elite defense and could make things difficult for Barrett once again as he did in their first matchup.

It drops from there for the Sixers. Tobias Harris (a solid player in the midst of a career year) and a handful of role players could cause the Knicks trouble. Specifically, the outside shooting could be a problem; Philadelphia has Seth Curry and Danny Green in the starting lineup, with Shake Milton coming off the bench; all three can change the game with their outside shooting. They also have their elite defender off the bench, akin to Frank Ntililina, in Matisse Thybulle.

Per NBA.com, the Sixers rank 27th in three-point rate, but the trio of Curry, Green, and Milton could make things interesting if they catch fire.

New York should also look to eliminate chances for second chance scoring from the Sixers. Philadelphia is currently sixth in the league in offensive rebound percentage. Simmons, an underrated all-around player, has a lot to do with that, but Dwight Howard and Tony Bradley’s bench duo also come in and can do damage on the glass. Stifling the shooters and holding their own in the glass is vital for New York to have a chance against the Eastern Conference’s best team.

In short, the Embiid injury hurts the Sixers, no question, but this team is no slouch, capable of mixing it up with the best teams in the league. Simmons’s ability to impact the game in many ways allows guys like Harris, Curry, and Green to maximize their skillsets and work around him. Milton and Thybulle are younger but exceed at one skill that allows them to impact the game. Rookie Tyrese Maxey, floating in and out of Doc Rivers’ rotation, gives them another ball-handler and slasher when he’s on.

Overall, Philadelphia a fun team to watch, and a big trade could put them in the mix for coming out of the Eastern Conference.

All three players missing continue to be huge for New York. Despite his standing amongst the fan base, Payton remains a staple in the starting lineup for Tom Thibodeau, while Rose was a consistent changeup off the Knicks bench. Both players out places pressure on Immanuel Quickley to run the offense and guys like Alec Burks to prop up the second unit offensively.

Nerlens Noel has done well in Robinson’s absence, but games like last night were a prime example of how the Knicks miss Robinson. Having a consistent defensive presence and shot alterer in the middle helps New York maintain their top defense. As Noel sits, those minutes are going to a veteran Taj Gibson and neophyte Obi Toppin. The Knicks need Robinson back as soon as possible.

Despite splitting the last two games, New York has a positive: their top three offensive players all finished with 20 points or more in each game. The trio of Quickley, Barrett, and Randle are all key players to the team’s success, and with all three having strong games at the same time, the Knicks are starting to look a bit different, and the outline of a good team is beginning to form.

Randle was an All-Star this year, but Barrett, the second-year swingman from Duke, has seen elevated play as of late, taking control of the offense and finding his footing as an outside shooter. Quickley, who received the first start of his career against the Nets, continues to confound opponents with his herky-jerky motion when attacking the basket and trademark floater that opponents still haven’t been able to time yet.

Even with Embiid out for Philadelphia, the New York offense rests on the back of those three players and based on their recent performances. The Knicks have a strong shot of winning this game.

This stretch of games is vital for the Knicks as they continue to salvage a good season. New York is currently in the midst of a fight for the sixth seed—the last spot to avoid playing in the play-in tournament. A loss to Philadelphia would push them to 1-3 since the start of the second half and further down the Eastern Conference standings with teams like the Atlanta Hawks and Chicago Bulls ready to pounce and the Charlotte Hornets on level ground record-wise.

Tipoff is scheduled for 8 p.m. ET.