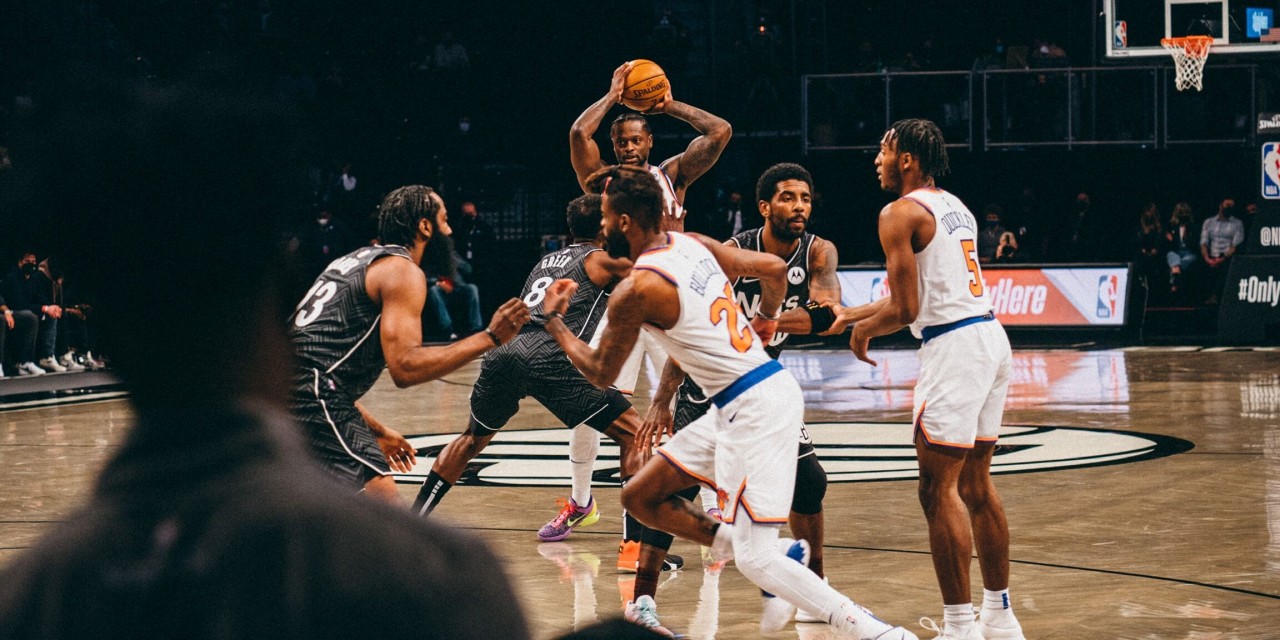 The Knicks have a chance at revenge against the Nets on Monday after the last meeting. But Brooklyn may re-form its Big 3 just in time for the matchup.

Crosstown rivals New York Knicks (25-25) and Brooklyn Nets (34-16) showdown for the third time this season, coming off of one of the more controversial endings of the NBA season in their last meeting.

The Knicks suffered a heart-breaking loss in their last matchup against the first-seeded Nets on March 15th. Julius Randle had a monster performance, putting up 33 points, 12 rebounds, and six assists in the loss. In that contest, Randle had a chance to have his signature clutch moment against one of New York’s biggest rivals, but, down three with 5.7 seconds left, he was called for a travel after pulling up for a potential game-tying three. Many have debated if it should’ve been called a travel or not after Nets star Kyrie Irving poked the ball loose, but in the moment, it looked like a clear play-on situation.

As much as that loss did sting for New York, they have a chance tonight to get their first win against the eastern conference juggernaut as they on the second night of a back-to-back after losing Sunday to the Chicago Bulls.

As of right now, Brooklyn may see their former MVPs return to the court. James Harden (tight right hamstring) has been sidelined the last two games, but the injury is not too serious. Nets head coach Steve Nash reiterated that these were playoff games, Harden would be playing, but they’re just taking a more cautious approach. Kevin Durant (left hamstring strain), who has been sidelined during Brooklyn’s last 22 games, is set to make his return this week and has not been ruled out for a return as soon as tonight against New York. The Nets are expected to be without key reserves Tyler Johnson (knee sprain) and Landry Shamet (ankle sprain) for tonight’s game.

The Knicks, who have been relatively healthy this year, only have one player currently listed on the injury report, center Mitchell Robinson. Robinson has, unfortunately, had the injury bug all season. He underwent surgery for his fractured foot he sustained on March 27th against the Milwaukee Bucks, and earlier in the season also had surgery for a fractured wrist. Sadly, Robinson may be sidelined for the remainder of the regular season.

This is a flaw that the Knicks must exploit in order to pull out a win over the Nets. Sophomore standout R.J. Barrett has already become one of the best slashers in the NBA this season. His deceptiveness, savviness, and his strength while driving to the rim this season has seen an uptick in his efficiency driving to the basket. Per Basketball-Reference, the young Canadian is shooting 62.9% within three feet of the basket this season, up from 56.8% his rookie season.

RJ PUTS HERRO IN THE SPIN CYCLE AND SLAMS IT HOME pic.twitter.com/ojzNHULd39

Without the numbers to back it up, anyone who has watched the Knicks this season has been in awe of the steps Barrett and Randle have made as playmakers for their team. Both have seen improved assist-to-turnover ratios, which is due in no small part to transforming into more willing passers after strong moves with the ball on the floor contrasted to last season.

How the men in orange and blue played in their last contest against the Detroit Pistons is how they should approach tonight’s game. Just because the personnel is tougher doesn’t mean the game plan should change. Classic drive-and-kick basketball, collapsing the defense in the paint, kicking it to wide-open shooters for a three or drives to the rim have been the Knicks’ best offense all season. Brooklyn’s firepower on offense can be overwhelming, but the ‘Bockers have seen some of the best teams in the NBA struggle the most when facing them, and their defense leaves much to be desired.

Kevin Durant is out on Monday night, but James Harden and Kyrie Irving will play the Knicks. Additionally, Blake Griffin is out, too, per the team: