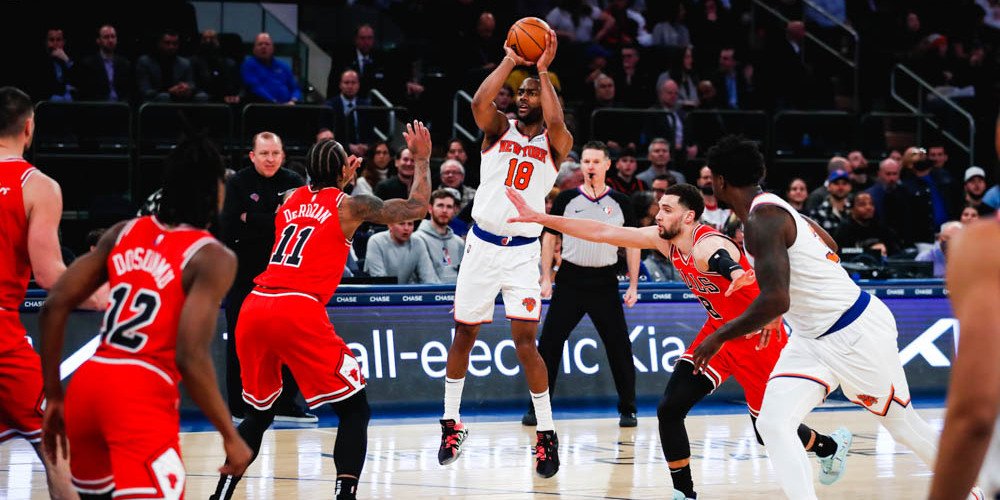 Despite a scoring outburst from DeMar DeRozan, the Knicks held on against the Bulls at home, winning their fourth consecutive game, the longest streak of their dim season.

The New York Knicks (34-42) beat the Chicago Bulls (43-32) at Madison Square Garden by a final score of 109-104. The Knicks have often been a step slow at home, but despite going an abysmal 60% from the free throw line, they were able to carry their momentum from a 3-0 road trip over to their home court behind another huge performance from Alec Burks and RJ Barrett.

The Knicks were coming off a win against the Detroit Pistons on the road yesterday afternoon. The game marked the return of Julius Randle to the starting lineup after missing three games with a quad injury, but he was overshadowed by performances from Immanuel Quickley and Burks, who helped lead New York to victory in Motown.

With seven games left in the regular season and having 4.5 games between themselves and the final play-in spot, the Knicks were looking to tack on another victory to their three-game winning streak to try and remain in the conversation for the 10th seed.

The first quarter began inauspiciously with the Bulls’ Zach Lavine hitting his first two shots, putting Chicago up by five. Even with the Knicks piecing their offense together and getting good shots off, their defense was laughable. New York tried finding the range to keep pace with Chicago’s hot shooting, but they were ice cold from beyond the arc, going 1-of-8 from deep in the first. Quickley and Miles “Deuce” McBride checked in late to wrap things up, and they immediately scored six points combined to get the Knicks within four points of the Bulls. That, coupled with much better defense played by the youth of the ‘Bockers, made the game competitive as they entered the second quarter.

In the second period, things on the defensive end of the floor did not look much improved, with DeMar DeRozan getting anything he wanted in the paint with little resistance. Another glaring stat for New York entering the quarter was their free throw shooting. Even though they got to the line plenty, they went 6-of-11 from the charity stripe through the first half. Obi Toppin, after missing a few free throws earlier in the quarter, started to ignite from three-point range, hitting back-to-back jumpers to get New York back to within six of Chicago. RJ Barrett started to get hot at the same time with a big dunk and a huge steal on consecutive plays, which was followed by an alley-oop to Mitchell Robinson from Alec Burks that got the Knicks within two points of the Bulls’ lead. After that flurry of action, Burks was looking to continue his momentum from yesterday’s game, going on an absolute tear in the second half of the period. He finished up with a team-high 15 points at the half, and New York was up three at the half.

RJ BARRETT IS AN AGENT OF CHAOS pic.twitter.com/Z44qxzQMJB

The Knicks needed to maintain their defensive identity from the second quarter if they wanted to keep their lead to begin the second half. They looked to be in that form at the start of the third, and their offense was in sync as well. Barrett was especially solid, hitting two acrobatic and-one bank shots to cushion New York’s lead. They kept the Bulls on their toes for the most part, but personal fouls were beginning to stack up with the craftiness of DeRozan starting to pester the Knicks in the paint. It didn’t make a big impact on their gameplay, though, as Burks and Barrett continued to provide a much-needed spark on offense with Robinson anchoring the paint on both ends. Two technical fouls on Barrett and Randle threatened to kill New York’s momentum, but they rode out the frustration to maintain a six-point lead heading into the fourth quarter.

The fourth started on a positive note for the Knicks as Barrett hit a quick three-pointer out of the huddle. Barrett continued to put pressure on Chicago in the paint, but he along with the rest of New York could not keep DeRozan away from the foul line. DeRozan and Chicago’s Coby White began to percolate in the fourth, forcing New York to call a timeout up only by three with just over seven minutes left in the period. Out of that pause in play, Barrett and Toppin hit timely three-pointers to get the Knicks back up by seven. The dismaying free-throw shooting from New York from earlier in the game continued into the fourth, unfortunately, and it was making it difficult for the Knicks to seal the victory.

But, in the nick of time, Burks hit yet another huge long ball to put New York up by three with just under 30 seconds left in regulation. Randle, after a silent night, hit two clutch free throws to put the Knicks up five for good, as they got the win at home.

The star of the night for the ‘Bockers was Alec Burks, who went off for 27 points, six rebounds, and three assists. Not to be outdone, RJ Barrett had a nearly identical stat-line as he scored 28 points while also grabbing six boards and recording three assists. Mitchell Robinson was solid on the glass all night, collecting 12 rebounds along with 16 points and three blocks. Evan Fournier and Julius Randle both had lackluster scoring nights, with both only recording five points apiece. Randle did register a team-high 13 rebounds while Fournier had three assists.

DeRozan finished with 37 points and a perfect 12-of-12 from the charity stripe, including 15 fourth-quarter points. Co-star Zach LaVine finished with 27 points.

Obi Toppin was close to breaking his career-high in scoring (19 points) but came just short with 17 on 6-of-11 shooting. He also had two rebounds. Immanuel Quickley had eight points and four assists, and Deuce McBride had three points and three rebounds. Jericho Sims played 13 minutes but did not score. He did grab two boards.

New York will face off with the Charlotte Hornets on Wednesday night at the Garden. While unlikely, they will be seeking to notch another win as the regular season draws to a close, and their hopes for a play-in spot hinge on their victories down the stretch.