New York’s Bench Mob Is the Key to Playoff Success 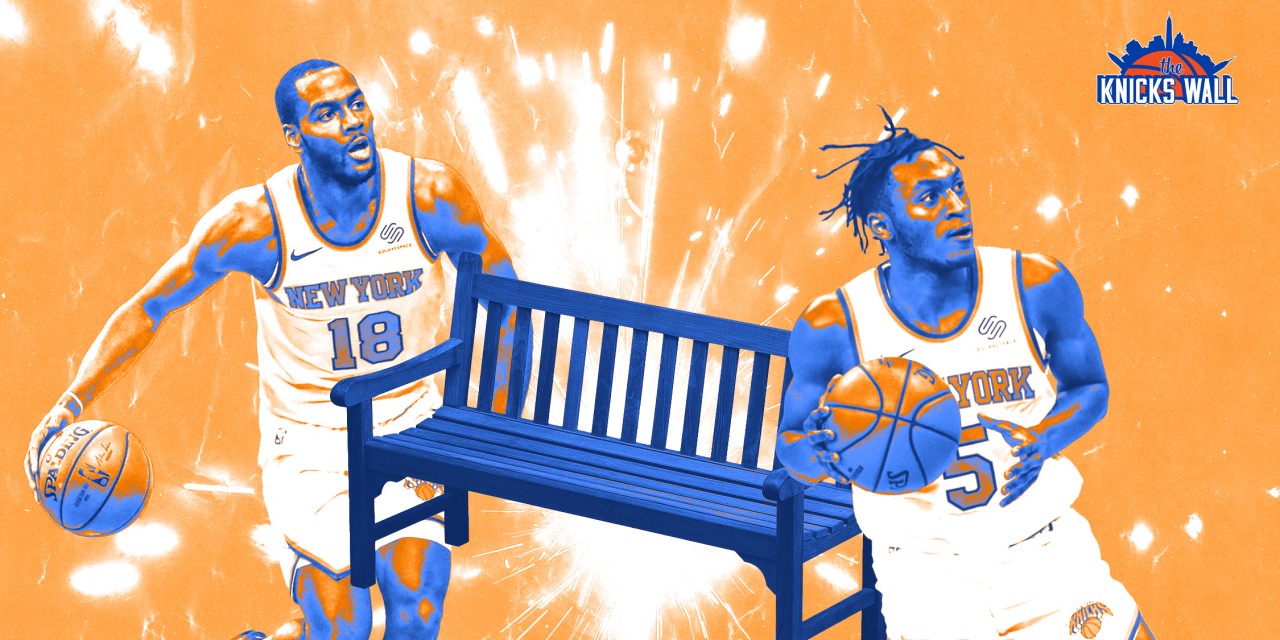 A productive bench could be the separation the Knicks need to beat the Hawks and advance in the NBA playoffs.

The starting lineup is typically a team’s most important lineup. Good teams, however, tend to have solid depth or be blessed with transcendent talent. Tom Thibodeau’s New York Knicks are the latest example of what a good bench unit can do.

The Knicks starting lineup is okay. The current starting five of Julius Randle, R.J. Barrett, Reggie Bullock, Nerlens Noel, and Elfrid Payton has a -4.9 Net Rating this season. Conversely, the second unit has a 19.5 NetRtg, per NBA Stats. That backs up what your eyes will tell you when you watch the Knicks: it is the second unit Thibodeau relies on most to right the ship or keep the game on course. It is also the lineup that will have a heavier influence on playoff games, assuming no major rotational changes come on Game 1.

By rotational change, I mean replacing Payton altogether. The Payton discourse has reached the territory where the debate no longer exists, just the resignation that no change is coming. Payton has been particularly abysmal since his 20-point performance against the Los Angeles Lakers on April 12th. Since then, Payton has averaged 5.2 points, 2.9 rebounds, 2.7 assists, and has shot 36.0% from the floor (28.6% from three).

Still, the fiercely loyal Thibodeau has refused to mess with the recipe that got the team to 41 wins so far. It would be ambitious to think he will change it now. The key ingredient to that 41-win recipe, which allows the starters to survive with a struggling Payton, is the second unit.

It’s not rocket science: depth usually translates to wins. Looking back to the last good Knicks team in 2012–13, that group had a good bench mob led by Sixth Man of the Year J.R. Smith and fan favorites Steve Novak and Pablo Prigioni.

This year’s iteration of the bench mob has just as fun and is more vital to the team’s overall success. Thibodeau’s bench mob is the melting pot of the team, a perfect blend of Thibodeau’s most trusted veterans, mixed with the team’s promising young rookies and the resident microwave scorer to round it out.

Derrick Rose is at the center of it all, becoming the team’s third-most important player after Randle and Barrett, and should receive consideration for Sixth Man of the Year. Rose’s second act in New York would be the top storyline of any other Knicks season. It just so happened that Julius Randle put together the greatest single-season turnaround in recent memory, and Thibodeau helped produce one of the best team turnarounds in recent memory—not to mention Barrett’s sophomore leap. The value Rose adds is not lost on his teammates, and certainly not his head coach.

When you played word association with Rose, you immediately thought of God-gifted athleticism or superstar scorer. The athleticism may have left Rose’s body, but his talent hasn’t.

Rose has adjusted to an older man’s game. His highlight-reel dunks have been replaced with sharper shooting; Rose is hitting a career-best 41.1% from three with the Knicks this season and has proved deadly accurate from the midrange too, shooting 50.0%, which ranks him in the 89th percentile, according to Cleaning The Glass.

His ability to score, and do it rather quickly, has helped the Knicks tremendously throughout the season. In the team’s ultimate gut-check game against the Clippers in Los Angeles, it was Rose who poured in 25 points and kept the Knicks in it long enough for Randle and Barrett to help ice it.

As needed as his scoring has been, where Rose has yielded the most value is on the playmaking and defensive fronts. It has made the second unit as a whole malleable to whatever the team needs on a given night.

The traditional second unit, compromised of Taj Gibson, Immanuel Quickley, Alec Burks, Obi Toppin, and Rose, has been so effective because of the balance Rose and Gibson offer. Burks is a bucket-getter, as is Quickley. Toppin is still finding himself, although he will never be mistaken for a staunch defender. Despite the lack of plus-defenders, that lineup has a 98.9 Defensive Rating.

Gibson is will always be recognized as a good defender. Rose not so much, but he has made a difference at the end of the floor. Rose doesn’t rack up a bunch of steals or tons of blocks. He does the little things, like not fouling. Rose ranks in the 89th percentile in foul percentage, per Cleaning The Glass, and has always been good at playing defense without fouling. He has brought the defensive attitude that Thibodeau attempts to credit Payton with and the results have been impressive.

Back to Gibson for a second. The 35-year-old has stepped up just as much as Noel. When Noel had to bump up to the starting lineup to replace the injured Mitchell Robinson, a huge void was left in the second unit. Gibson has filled that void and anchored the backend of the defense. Without Gibson, there is no telling how Thibodeau would find Noel or Randle time to take a breather.

Burks serves the polar opposite role. He is the steady scorer Thibodeau can confidently play late in close games. Burks ranks fourth on the team in fourth-quarter points, trailing only Randle, Barrett, and Quickley. There are a handful of games, the most recent example coming against the Spurs at MSG last week, where Burks helped carry the team home. With playoff games naturally more contentious and the ability to self-create invaluable, Burks’ importance will only grow.

Then there are the rookies, Quickley and Toppin. Quickley’s rookie year has been properly documented. He is a foul-drawing wizard who will develop into a flamethrower as he develops. For now, he offers a long-range shooting dynamic that does not exist elsewhere on the roster and the type of microwave scoring that could swing a game.

Lastly, there is late bloomer Obi Toppin. It’s a bit ironic that Toppin gets the least praise despite being the higher draft pick, but slow starts can do that. For as slow as Toppin started his Knick career, it is noticeable that his comfort level is peaking at the perfect time. Over his last 15 games Toppin has shot 55.3% from the field and 40.0% from three. He is no longer meandering around the perimeter, but now looks like a man with a plan when he’s on the court.

Toppin’s development could be credited to the mentorship of Rose and Gibson, who serve as extra eyes and ears on the floor for Thibodeau. Rose in particular made it a point to immediately take Toppin and Quickley under his wing upon arriving. The consistent court time with the same unit has likely played a major role, and now Toppin is in a position to offer the Knicks solid minutes as the rotations shrink and the stakes rise.

These five will have to keep their cohesion up for the Knicks to keep their edge over opponents. In games where the starters are burdened with containing a prolific scorer like Trae Young, the bench mob will be tasked with pouring in the points—something they have been successful doing over their last 10 games, with an impressive 132.6 Offensive Rating.

Another intriguing trend over the past 10 games has been the prominence of Rose and Gibson in the team’s most-used lineups. The pair have become the first two players off the bench, and Rose is present in three of Thibodeau’s five most-used lineups.

Rose would be most likely to get a bump up to the starters, but experience tells us Thibodeau will leave Payton there. In 2010–11, Keith Bogans played a similarly insignificant role for Thibodeau’s Chicago Bulls, yet started every regular season and playoff game. Think of Payton as this year’s Bogans.

But think of Payton’s persistent presence as a vote of confidence from Thibodeau. Not confidence in Payton, or even Randle or Barrett. But in the two guys he has been to hell and back with, the guys who have played vital roles throughout Thibodeau’s coaching career, and the unit they are responsible for running.

The bench mob was back in action this season, and if the Knicks hope to make it past the first round, it will depend on how strong that second unit plays.

»READ: Knicks dutifully celebrate playoffs, but focus next is on Hawks