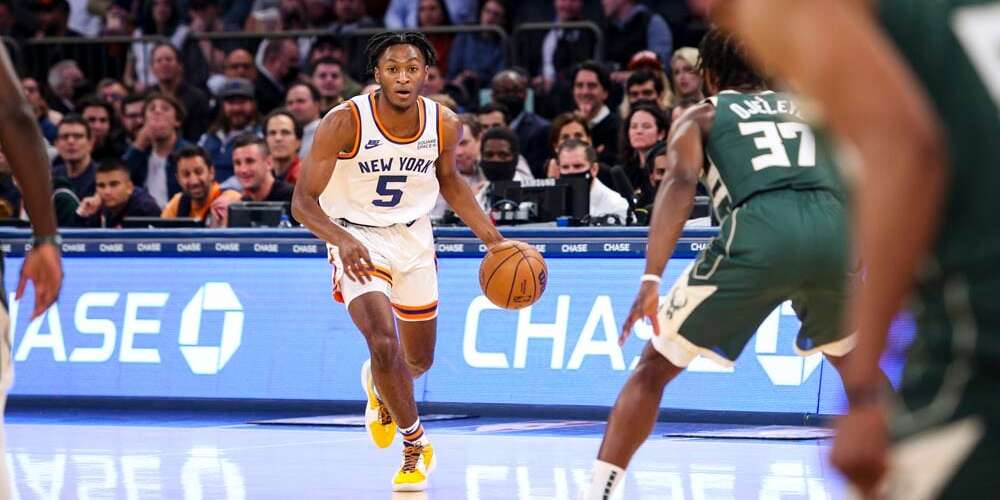 Another puzzling home loss, this time to the Bucks, has put the Knicks in a strange position as the bench continues to shine over the expensive upgrades to the starting unit.

NEW YORK, N.Y. — The New York Knicks (7-5) are playing abysmally at home right now, and their bench is far outplaying the starters. Madison Square Garden should be a haven for the Tom Thibodeau-coached ball club, but instead, it’s the source of frustration for last season’s fourth seed in the East, as the Knicks fell to 2-4 at home following the defeat to the Milwaukee Bucks, 112-100.

“And then before you know it, the season’s over. So it’s a bunch of bulls–t.”

Thibodeau, dismayed by his starting unit’s play, doled out heavy minutes to the bench unit of Derrick Rose, Immanuel Quickley, Alec Burks, Obi Toppin, and Taj Gibson (with backup center Nerlens Noel out). That five-man unit played the entirety of the fourth quarter, rolling with their late 24-6 run from the third quarter. New York’s bench outscored its starters 68-32, with Julius Randle as the only starter with a double-digit scoring night.

“Sometimes our starters lift us up when our bench is not doing good,” said Immanuel Quickley postgame after scoring a season-high 18 points. “So that’s why you have a team, so everybody can pick each other up. We just try to be there for the starters tonight, and I’m sure the starters will bring it against Charlotte.

“That’s what the team is for,” added Quickley.

Quickley played 27 minutes on Wednesday, continuing to break out of an early sophomore slump by shooting 6-of-12 from the field and 2-for-5 from three. The University of Kentucky product also dished out four assists. Those are marked improvements over his averages of 6.6 points and 1.9 assists per game entering Wednesday’s showdown, and it’s the third straight double-digit scoring effort from Quickley, although two of these games have been double-digit losses.

Beyond the obvious “eye test,” the numbers don’t lie: the Knicks’ bench is far outperforming the starters. After Wednesday’s loss to the Bucks, the bench unit composed of the players described above is, in fact, an NBA-best +19.9 Net Rating (hat-tip Sports Illustrated‘s Chris Herring). On the other side, the Knicks’ starters are -14.4 per 100 possessions, playing in approximately three times the minutes as the bench.

The elephant(s) in the room is the addition of Thibodeau’s brand-new starting backcourt: former Boston Celtics guards Kemba Walker and Evan Fournier. For those wondering, in 192 minutes together across nine games, Walker and Fournier sported a 118.5 Offensive Rating and 104.9 Defensive Rating (13.6 NetRtg) for Boston, as their time together was limited due to the trade deadline acquisition of the ex-Magic swingman and injuries sidelining Walker.

If Walker and Fournier are not to blame, then what is causing the starting unit to glitch, making the reserves have to claw out of early-game deficits?

The clearest problem is three-point defense. Much was made last season about New York’s “luck” regarding defending the three-point line. When opponents attempted three-pointers with the nearest defender six-plus feet away (“wide open,” per NBA Stats), they shot just 34.7%—a few tenths of a point from league-best Utah Jazz. In 2021–22, that figure is 42.6%, now the third-worst in the NBA.

First and foremost, Thibodeau’s unit needs to tighten up defending the perimeter. Through two games against the Bucks, it was notable to see New York quickly double-team last season’s Finals MVP Giannis Antetokounmpo. However, the team is crucially missing out on the second part of the gameplan—rotating over to prevent open jump shots after hitting someone with a double. The lack of hustle is plummeting the Knicks’ defense and making it tough for the starters to get into a rhythm on offense as they constantly fall behind (leaving clean-up duty to the bench).

“It’s all about contesting shots,” Derrick Rose said. The veteran guard scored 22 points and added seven assists and three steals in his effort to bring the Knicks back from a 24-point second-half deficit. “If you mess up, hard work and effort should make up for whatever mistake. …

“You’re not going to make everybody miss, but as long as you give an effort like some should give,” the former NBA MVP added.

Bucks wing Pat Connaughton was the beneficiary and latest role player to excel from downtown against the fledgling Knicks perimeter defense, shooting 7-of-13 from three-point range. Grayson Allen, who nailed six triples in New York’s road win against Milwaukee five days ago, poured in five more on Wednesday.

The Knicks have little time to figure it out if Thibodeau’s sentiments can be believed. While the second unit patches together the team, the revamped starters are falling behind.

“Our chemistry is really high,” Quickley remarked. “We pretty much have the same second unit as last year. That’s two years, a full summer, of being together. So we know where we like the ball, our defensive connection is really high. We just have a lot of chemistry together.”

The Knicks are back on the road—their comfort place, apparently—with a matchup with the Charlotte Hornets on Friday before returning home to face the Indiana Pacers again.

»READ: Evan Fournier is the key to unlock the Knicks