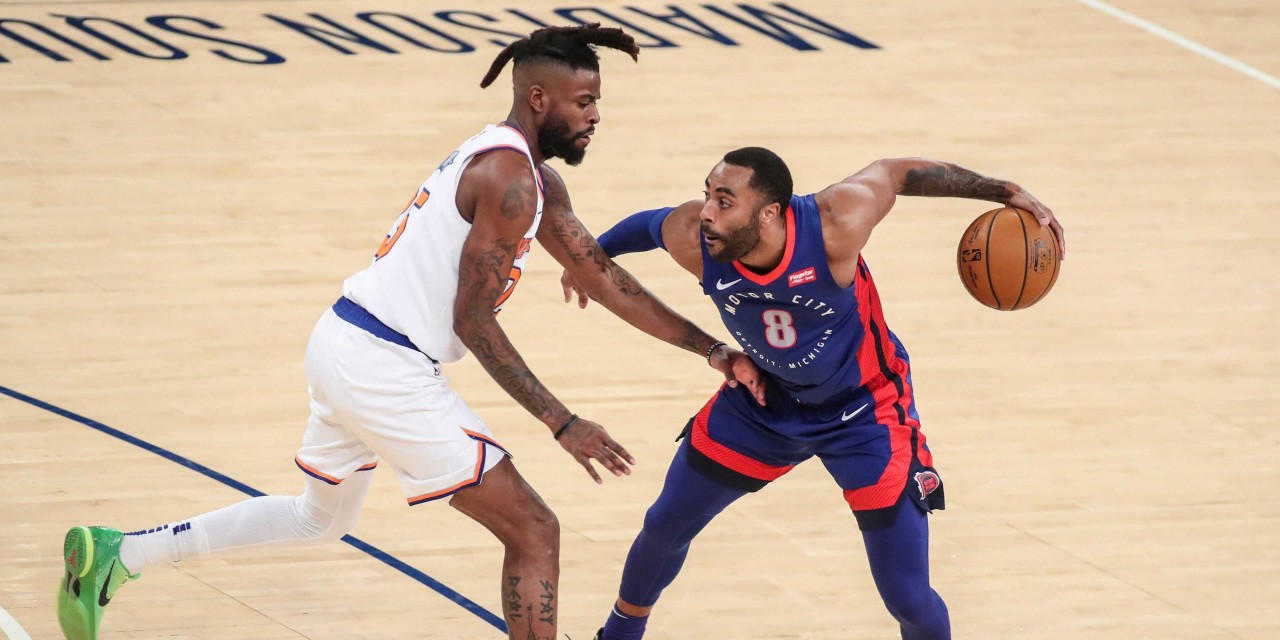 Julius Randle put on a maestro performance ahead of his All-Star Game debut with the Knicks beating the Pistons to end the first half of the season.

The New York Knicks (19-18) walloped the Detroit Pistons (10-25) in a game not as close as the final 114-104 score suggests. It was another night at the office for All-Star Julius Randle, who casually stuffed the stat sheet with 27 points, 16 rebounds, and seven assists. Elfrid Payton contributed 20 points and six rebounds in his first game back since February 23rd, and R.J. Barrett scored 21 points on an uber-efficient 9-for-13 clip.

As for the opposition, eight Pistons reached double digits in scoring spearheaded by 17 points from Wayne Ellington. Detroit took the court without their definitive best player in Jerami Grant, who is averaging 23.4 points per game on the season.

Frank Ntilikina served as instant offense off the pine

The Frenchman has converted his last six treys, a streak that extends back to Tuesday’s loss against the San Antonio Spurs. Ntilikina erupted for nine points across six minutes from the end of the first period to the beginning of the second. All of his points came from beyond the arc in a fantastic stretch that culminated with a step-back trey in Svi Mykhailiuk’s grill. Ntilikina’s long-range brilliance allowed the Knicks to build a cushion on the score column after engaging in a seesaw affair versus Detroit for much of the opening period.

FRANK WITH THE STEPBACK THREE pic.twitter.com/b8iwIwHNvx

Ntilkina, who not long ago rode the bench in New York, is now 13-for-21 from deep on the season. He’s slowly but surely emerging as someone worthy of fringe rotation minutes, even once the Knicks are at full strength. Three-point shooting remains an obtrusive area of improvement for New York, and there’s no one on the roster shooting the deep ball better than Ntilkina at this juncture.

Ntilkina did more than shoot the three with great accuracy—he also hounded three-point specialist Wayne Ellington and held the former Knick in check offensively. While the Knicks are an excellent team defending the paint, they are not replete with defensive-stoppers on the wings. Consistently employing Ntilikina with the bench unit to stymie opposing guards could further strengthen an already stout Knicks defense.

Elfrid Payton impressed in return to the floor

Sure, Payton’s skill set isn’t an ideal fit for the modern NBA—this is an open secret. But just because he’s a sub-par three-point shooter does not mean he is devoid of perks. There’s no denying he is among New York’s premier dribble-drive threats, and this trait of his impacted the outcome of this game. He weaved his way to the cup on numerous occasions against a porous Pistons defense sans rim protectors. More often than not, Payton either scored or made his way to the line whenever he bulled his way to the paint.

Additionally, Payton put together a moving-without-the-ball masterclass in this one. The veteran capitalized on ball-watching Detroit defenders for a handful of open point-blank shots. The Knicks should roll with RJ Barrett as the ball-handler more frequently. Payton, a speedster, has the feathery touch inside and the I.Q. to score a few hoops a game as an off-ball cutter. Not to mention Barrett looked extremely comfortable as the de facto creator tonight—he dished out five assists, including three in the opening minutes. Barrett’s five dimes marked his best performance in the assist department since February 13th.

RJ getting SAUCY in the lane and finding Elfrid for his third DIME of the first quarter pic.twitter.com/pjuRYbI2lP

Payton’s solid performance puts added pressure on the New York coaching staff, with Derrick Rose expected to return to the court soon. Will Rose have to earn his place as starting floor general upon return? If not, where does that leave Payton in the rotation? Both are pressing questions. Only time will tell what Payton’s role will look like in New York over the coming weeks, but his situation is one worth monitoring.