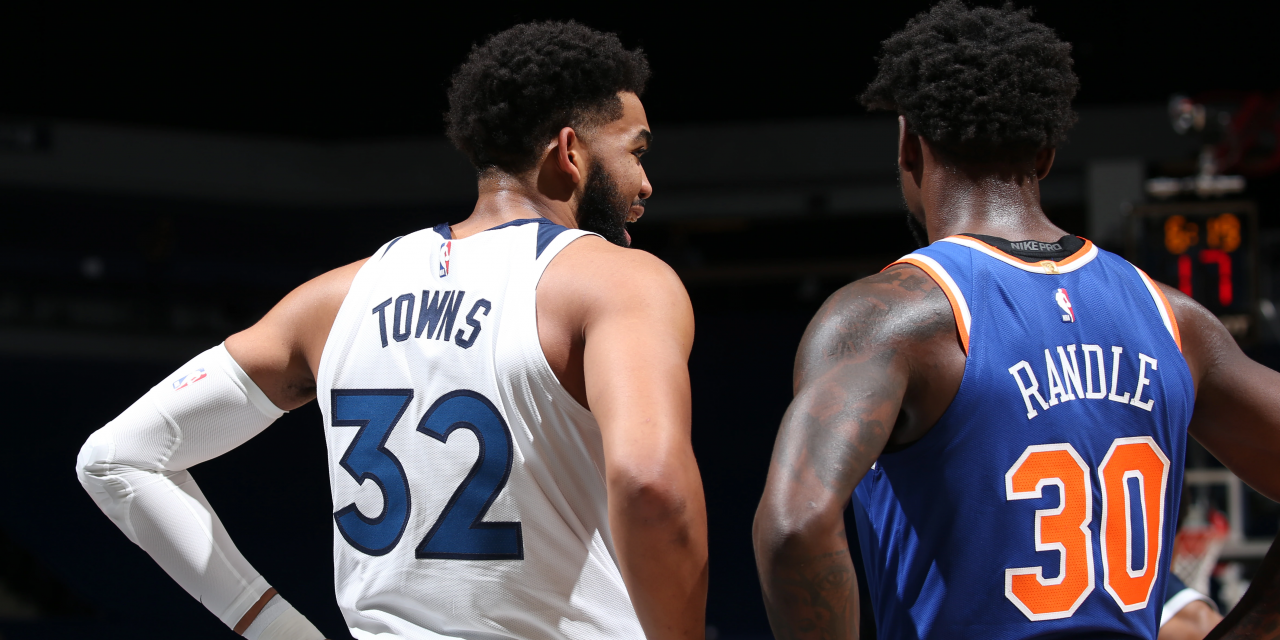 The Knicks let go of a comfortable double-digit margin, losing on the road to the NBA-worst Timberwolves in the waning moments.

The New York Knicks (24-24) blew an 18-point second-quarter lead on their way to a 102-101 loss to the Minnesota Timberwolves (12-36) at the Target Center on Wednesday night. With just 37.8 seconds remaining, Malik Beasley hit a go-ahead three-pointer to put the Timberwolves up by one, on what would be the final points scored of the game.

The Knicks had three chances to win the game within the final minute but were unable to convert. In what was an unusual sequence of events, R.J. Barrett turned the ball over following the Beasley triple, which was followed by Reggie Bullock steal to get the ball back with 20.4 seconds left. This led to a Julius Randle missed shot with 11 seconds left, another steal by Bullock, and then a missed Barrett jumper to end the game.

Randle led all scorers with 26 points on 11-of-20 shooting, to go along with 12 rebounds and six assists. Barrett had 23 points on 8-for-17 shooting and Elfrid Payton had 17 points on 6-of-13 shooting. For the Timberwolves, rookie Anthony Edwards led the team with 24 points on 9-of-16 shooting, while Beasley had 20 points, including five three-pointers. Karl-Anthony Towns and Jaden McDaniels both had 18 points.

In addition to blowing the 18-point lead, the Knicks also 13-point lead in the fourth quarter, as they led 90-77 with approximately eight and a half minutes remaining. The Timberwolves then went on a 15-4 run over the next 3:03, making it a one-possession game.

With just 24 games remaining, every single game is important in what will be a battle all the way until the end of the season for seeding in the Eastern Conference playoffs. Considering the Timberwolves have the worst record in the NBA, there’s no doubt that this was one of the worst Knicks losses of the season.

While this was a disappointing loss for the Knicks, Nerlens Noel and Taj Gibson continue to prove that they can fill the void for the injured Mitchell Robinson very nicely. Both played phenomenal defense on Karl-Anthony Towns, who shot just 7-for-18 from the field, scoring only 18 points.

Gibson had seven points, eight rebounds, and three blocks in 24 minutes played off the bench. Noel didn’t fill the stat sheet, as he only scored two points and grabbed three rebounds in 24 minutes. That being said, he did have two blocks, and Towns’ lackluster night was a testament to how good Noel was on defense.

For reference, Towns is averaging 24.1 points per game on the season, and over the last seven games coming into tonight, he averaged 29.6. Holding him to just 18 was a major success for Gibson and Noel. After tonight’s game, the Knicks are now 9-8 without Robinson.

Elfrid Payton has been the center of most Knicks fan’s criticism this season. Payton is averaging 12 points, 3.5 assists, and 3.7 rebounds this season, shooting only 43.8% from the field and 24.3% from three.

Despite his poor performances this season, Payton had an overall good game tonight, scoring 17 points on 6-of-13 shooting. However, Payton played 7:07 of the last 7:12 of the game and had two crucial turnovers while the Timberwolves went on their fourth quarter run.

Furthermore, Payton’s inability to shoot from the perimeter makes the entire Knicks team a lot easier to guard, as the opponent sags off him, putting more attention on Randle and Barrett and creating less space to operate.

Just look at Elfrid Payton here. The defender pays him zero attention, focuses completely on Randle, leads to a double team and a near turnover shortly after. He gets zero respect from an opposing defense. pic.twitter.com/GY5bXM7heh

This is the perfect example of why Payton had been a detriment to this team this season. It’s also why Derrick Rose was missed in a game like tonight. Immanuel Quickley also had an off night, as he failed to score on 0-for-4 shooting in 13 minutes.

The Knicks had 17 total turnovers compared to the Timberwolves’ 13. Five of those 17 turnovers came in the fourth quarter. That’s the perfect way to blow a double-digit lead in the last eight and a half minutes. New York ranks 10th in the NBA with 13.6 turnovers as a team per game, so this was not a great night at all in this category.

It also doesn’t help that the Knicks only shot 70.6% from the free throw line tonight, going 12-of-17, while the Timberwolves shot 84.2%, going 16-for-19. These are the categories where this game was lost for the Knicks.

The Knicks have two very winnable games next on the schedule. On Friday, they’ll return home to Madison Square Garden to host the Dallas Mavericks at 7:30 p.m. ET, who are 25-21 on the season. New York will then fly to Detroit to play the Pistons, whose 13-34 record is the worst in the Eastern Conference.

After dropping Wednesday’s game to the Timberwolves, it’s clear that the Knicks need to win the games that they should win in this tight Eastern Conference playoff race.

»READ: One burning question for every Knick