Knicks Blow Out Tyrese Haliburton, Kings at the Garden 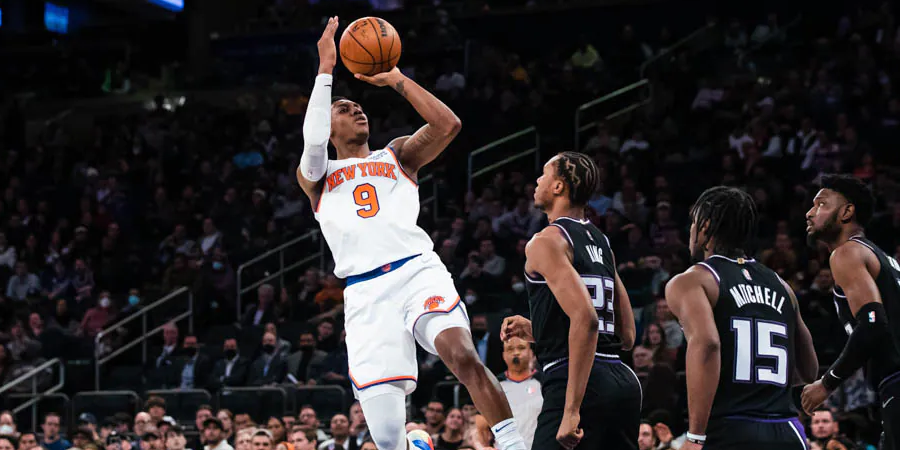 Knicks fans cheered for Cam Reddish to make an appearance as the fourth quarter tilted towards a landslide victory over the Kings, ending a three-game skid.

The New York Knicks (24-27) took care of business on their home floor with a 116-96 victory over the Sacramento Kings (18-34) in the first of two matchups this season. Julius Randle, Evan Fournier, RJ Barrett, Obi Toppin, Quentin Grimes, and Alec Burks all scored in double-figures for New York, with the veteran Burks leading the charge with 21 points, including 4-for-6 from behind the arc off the bench. The Knicks’ 20-point triumph over the Kings marks the third-largest margin of victory for the ‘Bockers this season.

The Kings, who have now dropped seven games in a row, were without star point guard De’Aaron Fox, a late scratch, due to an ankle injury. Fox has been frequently linked to the Knicks as a potential trade-deadline acquisition, making it very possible the next time the Knicks see the 24-year-old guard at MSG, he will be donning the orange and blue. Sacramento’s young guard tandem of Tyrese Haliburton and Davion Mitchell were decent this evening, pouring in 21 points and 18 points apiece, respectively, but it wasn’t enough to keep the Kings competitive. Buddy Hield, who is often a major factor from behind the arc when the Kings are successful, shot an abysmal 3-of-12 from distance and only scored 11 points.

In order for the Knicks to have any chance of sneaking into the playoffs, they will have to have more performances like tonight’s against inferior opponents. The Knicks put the pedal to the metal early and shot the ball well enough from three-point range (37.1%) and applied pressure from the opening tip defensively, forcing Hield and Haliburton into tough looks. All evening, the Knicks moved the ball terrifically and didn’t try to force Julius Randle, who looked engaged and involved, something we haven’t seen from the one-time All-Star this calendar year.

Beautiful ball movement leads to a missed three but Mitch is there to clean it up😏 pic.twitter.com/GtYmFbj2ZB

In addition to the incredible ball movement of the Knicks, neophytes Obi Toppin and Quentin Grimes were so fun to watch this evening. Grimes continues to cement himself as a budding 3-and-D type of player who is an absolute pest on the defensive end of the floor and a walking bucket when asked to do so. Toppin, who we can all agree should still be getting more minutes than he did tonight (19), provides tremendous energy and was able to harness that this evening, playing in the flow of the game very effectively and complementing his guys.

Nerlens Noel, who has been in and out of the lineup this season with injuries, left tonight’s contest with knee soreness but returned in the fourth quarter. With Noel absent for a large chunk of the game, Mitchell Robinson stuffed the stat sheet with nine points, 13 rebounds, and two blocks. Robinson, in the process, passed Marcus Camby, coincidentally in attendance, and is now in sole possession of fifth place on the Knicks’ all-time block list.

With Noel and Robinson proving to be extremely fragile, you have to be concerned when these guys step on the court whether they are able to keep these nagging lower-body injuries at bay. Luckily, Noel was able to come back and looked to be moving pretty decently.

The Knicks’ next game will be on Wednesday against Ja Morant and the Memphis Grizzlies, who lost tonight in overtime in Philly, tipping off at 7:30 p.m. ET.