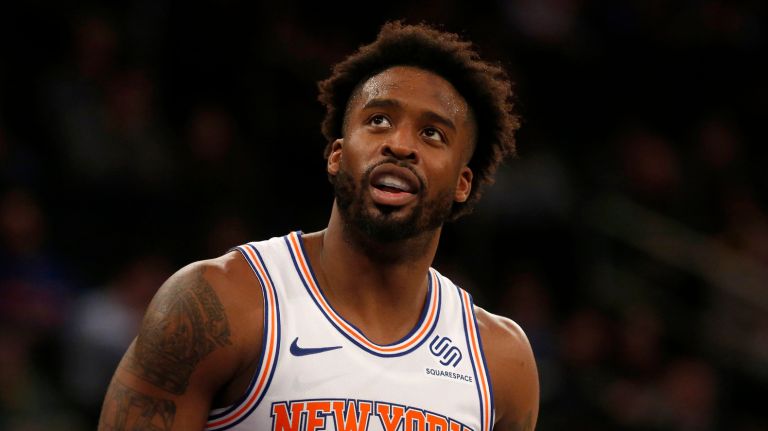 After coming to the Knicks as one of the expiring deals in the Kristaps Porzingis trade, Wesley Matthews’ contract has been bought out by New York. DeAndre Jordan, meanwhile, will stay in the Big Apple.

The New York Knicks have agreed on a buyout of Wesley Matthews’ contract, per the NY Times‘ Marc Stein. The Athletic’s Shams Charania confirmed the news. Matthews was set to make $18,622,513 this season, per Spotrac.

Matthews, 32, remains a good role player and should mesh well on the bench unit of a playoff team. Averaging a steady 12.8 points per game on 37.4 percent shooting from deep, Matthews is an ideal shooting guard for a bench unit focused on moving the ball.

It was widely speculated that the Knicks would look to move Matthews on the day of the trade. The offloading of Matthews’ contract opens up a roster spot for the Knicks, giving New York the opportunity to call up one of its G League players or explore other players in the buy-out market. The Sixers are interested in Matthews, per KYWN’s Jon Johnson, while the Warriors and Rockets could be in the mix, too, per Stein. Additionally, Shams Charania of The Athletic is reporting that the Indiana Pacers are frontrunners to sign Matthews.

The Knicks plan to keep DeAndre Jordan but intend to grant Wes Matthews a buyout once the trade deadline passes, league sources say. Matthews is at the top of the buyout brigade with expected interest from Indiana, Golden State, Houston and maybe more.

Wesley Matthews will agree to a contract buyout with the New York Knicks, and the Indiana Pacers are frontrunners to sign Matthews, league sources tell @TheAthleticNBA @WatchStadium.

With a focus on prioritizing playing time down the stretch for its younger players, Matthews did not fit into the Knicks’ equation for the rest of the season, and vice versa. Originally coming to the Knicks by way of the Kristaps Porzingis trade, Matthews’ return as an expiring contract helped create cap space for two max contracts this summer.

One of the best undrafted players of all time, Matthews has been at best an elite 3-and-D starter and tertiary scoring option, while being a very solid role player at worst throughout his entire career, spending most of his early years in Portland. After tearing his Achilles months before entering free agency in the spring of 2015, Matthews signed a four-year, $70 million contract with the Dallas Mavericks.

Meanwhile, DeAndre Jordan will stay with the Knicks for the remainder of the year. Jordan started for New York in his first two available games for the ‘Bockers. Jordan reportedly has close ties to Golden State’s Kevin Durant, on whom the Knicks are focused this summer, per the Daily News.

Jordan can serve as as mentor to second-round pick Mitchell Robinson, the surprising rookie who passed over one year at college and sat out a year for the draft. Robinson and Jordan possess similar games—relying on shot-blocking skills, verticality, and length to suppress opponents on defense and astute dunking prowess on offense.

Charania reports Matthews will sign with the Indiana Pacers.

Vet minimum ($2.3M), prorated for the rest of the season, for @WessyWes23 in Indiana once buyout with Knicks is complete, per league source.

This post may be updated to reflect breaking news.