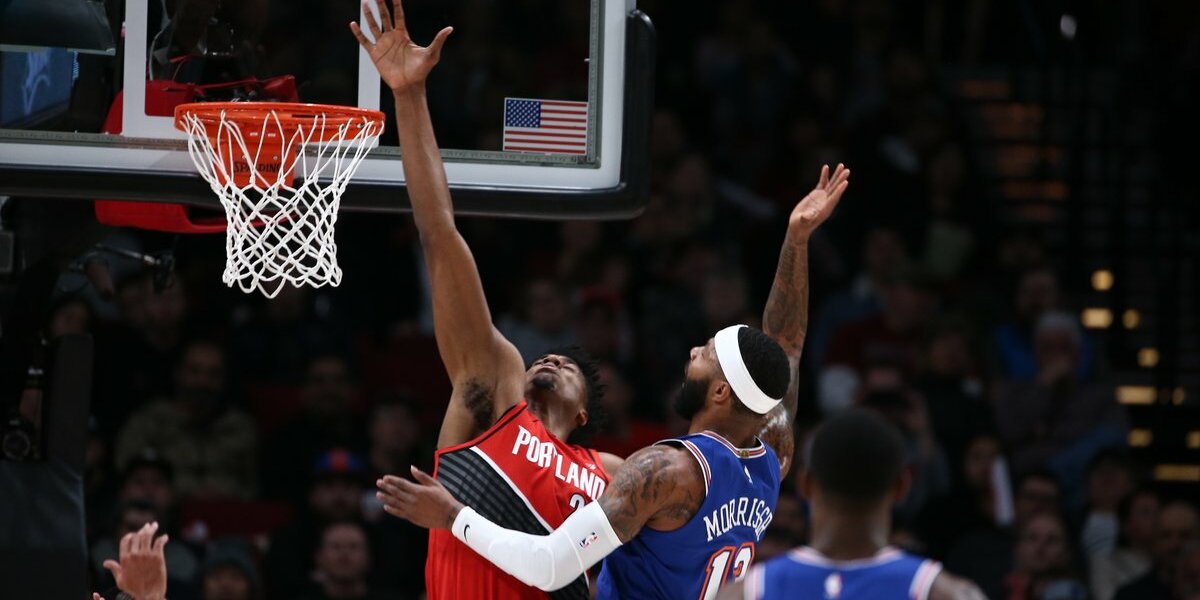 Carmelo Anthony had the last laugh as the Knicks were throttled visiting the Blazers on Tuesday night, the first game of their road trip.

Mike Miller’s second game as Knicks head coach was a return to normalcy for this squad. The New York Knicks (4-20) were run out of Portland, 115-87.

A solid start was negated by Damian Lillard going super saiyan one minute into the game. Lillard hit six of his first eight shots, virtually all step-back jumpers, to pour in 17 first-quarter points. The Knicks looked cohesive on offense, and much faster, featuring a variety of picks, hard drives, and even post ups. Easy shots were generated, but the Achilles’ heel, free throw shooting, cost them three points leaving them with a 10-point deficit.

With Lillard on the bench the Knicks couldn’t make up any ground, cutting only one point into the hole. Elfrid Payton was the lone bright spot, once again proving he is the best traditional point guard on the team, but the Knicks simply couldn’t hit open shots. Lillard checked back in with five minutes to go and remained on fire, finishing with 25 points as the Blazers held a 20-point lead heading into the half.

The cold shooting continued as the Blazers acted like they were guarding five Ben Simmonses. You could feel the lack of confidence the team collectively had in their jumpers as they started to force contested layups instead of taking open jumpers. The result was a 86-59 score heading into the fourth.

Garbage time didn’t provide any relief. The only source of entertainment was a brief Carmelo Anthony hot streak, other than that it was kill the clock for both teams. Lillard resisted the urge to embarrass the Knicks with a 50- or 60-piece, yet still managed to hit eight threes as he finished with 31 points in 28 minutes.

It’s a quick turnaround for the Knicks who will play in San Francisco tomorrow night against the Golden State Warriors.

Sometimes the answer as to why a team is doing bad is difficult. Tonight was not one of those nights. The Knicks could not hit the ocean from the sand in the first half, shooting 34.0% from the field and 13.3% from three in the first half.

It only got worse in the second half as the Blazers started to sag off, daring the Knicks to shoot. As a team, the Knicks shot 35.2% from the field, 18.4% from three, and 61.5% from the free throw line. Julius Randle and Mitchell Robinson were the only Knicks to shoot better than 50% in one of the more embarrassing all-around performances of the season.

Carmelo Anthony came out amped to play his former squad. Anthony might have been a little too jolted, however, missing shots he usually makes in his sleep in the first half, ending the half with four points on 1-of-6 shooting.

He salvaged his night thanks to a good fourth quarter, finishing his night with 16 points, including 3-of-4 shooting. ‘Melo will return to the Garden on New Year’s Day in what will hopefully be a more competitive game.

TKW Clip of the Night: Elf to Mitch

Is it still a highlight when you’re down 20? Regardless, the Bayou Boys with another Louisiana Lob! pic.twitter.com/S7Ct2DIdVJ

Bayou Boys is a tremendous nickname, shoutout to TKW’s Shaun Geddes. Elfrid Payton was the only positive from the Knicks’ side of things. Payton and Mitch have legitimate chemistry, something Miller should tap into tomorrow night and the near future.