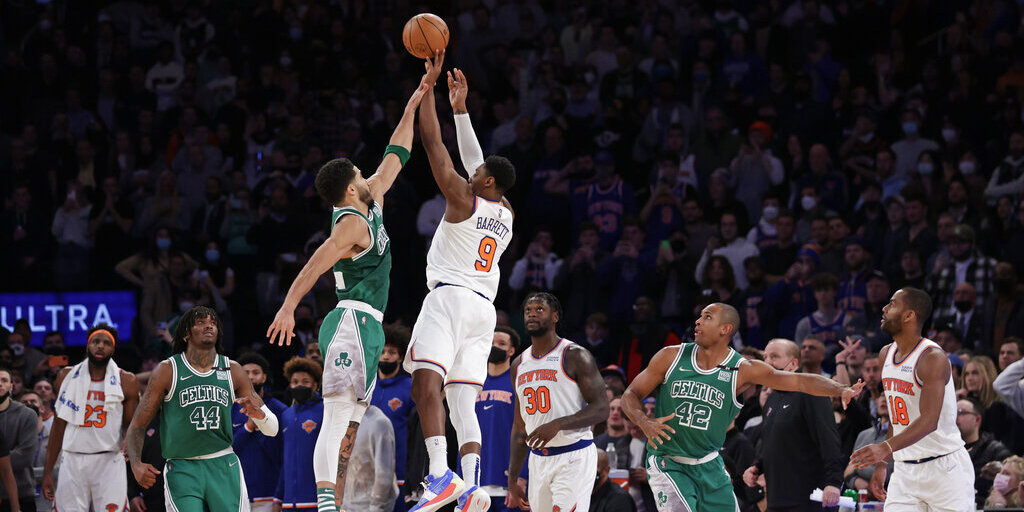 An RJ Barrett miracle shot beating the Celtics has suddenly propelled the Knicks with a hopeful feeling to take control of their rocky season.

NEW YORK, N.Y. — The New York Knicks won tonight against the Boston Celtics in what can only be described as a roller coaster on fire for four quarters. The Knicks looked beaten down and were in a hole by 25 points at one point, they but powered back off a career-high night from Evan Fournier and an absolutely electric buzzer-beater from RJ Barrett, who had struggled the entire night.

It was a huge momentum shifter for them, as they needed the victory over Boston to increase their lead over them for a tie-breaker and over their bitter rival in the Eastern Conference.

“We started off slowly, no energy. We can’t do that…we gave up a lot,” head coach Tom Thibodeau said in the postgame press conference, referencing what he saw from his team at the start of the wild contest. “We let [an airball] set the energy early on. We can’t play sorry for ourselves.”

The rest of the team must have received that message loud and clear. You could see the aggressive play of Julius Randle creeping onto the court and into his game as he made tough shots and yelled at the crowd. Evan Fournier was practically skipping up the court after each made three, of which he hit 10, tying a Knicks franchise record. It all crescendoed with RJ Barrett’s game-winning three-pointer, as the Garden finally exploded.

Barrett explained postgame that the team is built to play together, and through that, they can find success.

“That’s what we’re about as an organization,” expressed Barrett.

Fournier, riding off his career evening, said he thinks that consistency is the key to the Knicks’ season turning around especially after such a positive evening.

“When you’re going through a season where there’s a lot of inconsistency, and you’re trying to find your rhythm, you’re trying to attack the day with positivity,” said Fournier. He also relayed that he knows with so many pieces having shifted since the start of the season, it’s understandable that New York is essentially still looking for an identity.

“We’re looking for consistency…we’ve had so many guys out. We’re kind of looking for a way to get going and have a way to play,” said Fournier. As the least consistent player on the team this far into the season, it was an important statement to make.

The Knicks need change. They aren’t the same gritty, defensive-minded team of last year. They’ve made changes to the lineup several times over, and they’re seeking consistency to become the playoff contenders they were projected to be after an appearance in the first round last season. This game was a statement for them, for their identity, and for their goals. They have to take another win against Boston on Saturday to begin to recapture that team identity again.