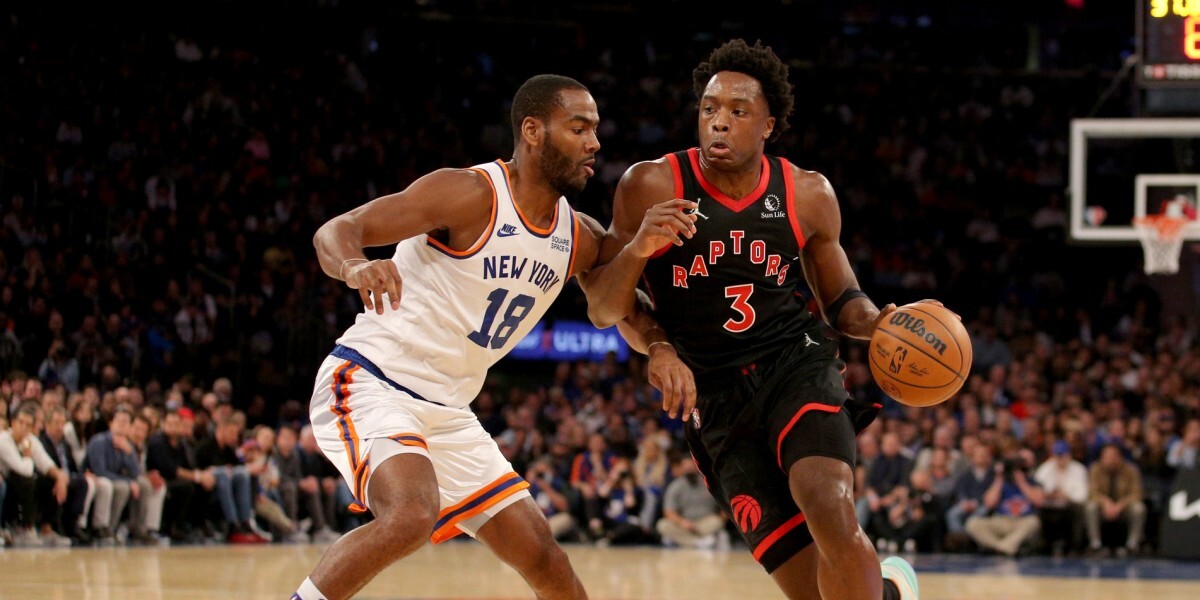 The Knicks could not withstand OG Anunoby’s career night along with a fiery Raptors third quarter as they suffered their second loss of the young season.

What initially appeared to be an electric night at Madison Square Garden ended in another disappointing home loss for the New York Knicks (5-2) as they fell to the shorthanded Toronto Raptors (5-3) by a score of 113-104. The Raptors were without promising 2021 fourth-overall draft pick in Scottie Barnes and their All-Star forward Pascal Siakam, as each were sidelined with injuries. Knicks backup center Nerlens Noel remained out, as he has yet to touch the hardwood this season.

The ‘Bockers were scorching from beyond the arc, shooting 10-for-19 from deep in the first half. Coming into tonight’s contest, New York led the Association in three-point shooting, hitting 16.7 threes per game. However, the hot shooting quickly turned in Toronto’s favor as the Knicks cooled off in the second half while the Raptors went absolutely nuclear. New York shot 6-of-18 from three and Toronto made nine of their 15 attempts as they poured it on in the third period.

OG Anunoby led the way for the Raptors with a single-game career-best 36 points, shooting 13-of-27 from the field with four threes. His offensive game has certainly developed nicely for Toronto, as Anunoby was hitting an array of shots off the dribble and using his strength to get easy buckets in the paint. Gary Trent Jr. chipped in 26 points, including four triples of his own, and Fred VanVleet added 17 points with seven assists in the win.

Offensively, it was not a great night for New York. Knicks star Julius Randle had a monstrous first quarter, but after his initial 18-point explosion, he was held to only four points the remainder of the contest. RJ Barrett, building off a career game in New Orleans, was the lone bright spot for the Knicks having his third-straight strong scoring performance with 27 points, six rebounds, and made five of his eight attempts from three.

Barrett is now averaging 18.6 points (27.3 points in his last three contests) and 5.7 rebounds per game while shooting 51.1% from the field and 42.9% from three, as he continues to look more comfortable each game creating shots off the dribble. Despite losing tonight, Barrett’s continued development is one of the most encouraging signs seven games into the 2021–22 campaign.

“We try to protect The Garden at all costs, but we didn’t do that tonight. I think they just played harder than us, honestly.”

Defensively, the effort and energy that we’ve become accustomed to with this unit were lackluster. Rotations were sloppy, effort on the boards was weak, and there was little sense of urgency closing out on shooters—all leading to the Raptors making the Knicks pay. The Raptors were unconscious in the second half, but that’s no excuse for the lack of effort on that end. This is the second game in the Garden this year that the ‘Bockers have come out flat in the second half on both ends against inferior opponents.

New York will look to clean it up and get back in the win column this Wednesday in Indiana with a two-game road trip against a struggling Pacers unit and the reigning champion Bucks.

»READ: How do the Knicks handle the center rotation with Nerlens Noel injured