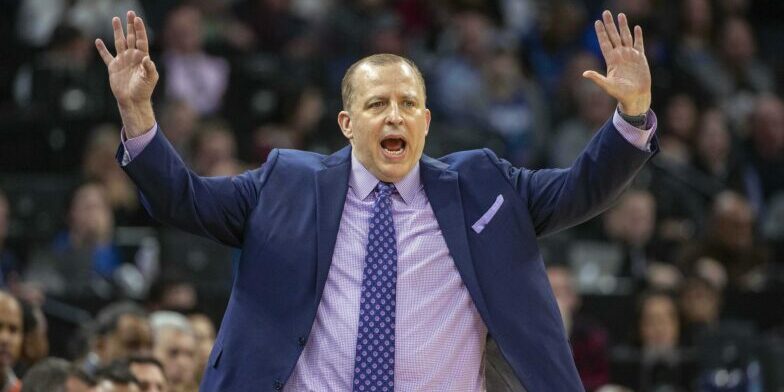 Speaking to available media after the first day of Knicks training camp, head coach Tom Thibodeau and players laid into their defensive foundation.

However, coming off the heels of their first official practice, the two ‘Bockers and their coach took a cautious, if not unexpected, approach on the eve of the franchise’s new administration.

It’s day one, in a pandemic, with an entirely new front office, coaching staff, and half the roster. Thibodeau essentially stated as much. He was not certain of any starters or a starting lineup or rotation; nothing stood out to him on the first day of camp.

When asked directly about Frank Ntilikina, Thibodeau mentioned he liked the Knicks’ fourth-year player, and that “he does some things very well,” as the coach spoke to the French guard’s versatility on defense.

Former third-overall pick R.J. Barrett says, while the long layoff was tough, it gave him plenty of time to study and focus on the details when working on his game. When asked about how the Knicks may look offensively, Barrett simply stated they are a young team and looking to run more.

Barrett, like Thibodeau and later Toppin, stressed defense was the focus. It remains to be seen what the third installment of a Thibodeau team will look like, but for a team that ended up middle of the pack defensively under interim coach Mike Miller last season, it’s expected Thibs will have them competing on that side of the ball at least. Barrett was a bit better than expected as a rookie defender last season, so it’ll be very interesting to see how Thibs and the new staff try to mold him.

Obi’s buying in on Coach's process.

Finally, incoming first-year forward Obi Toppin closed things out for the day. The young gun said he’s had no issues keeping up with anybody thus far, as we know he’s been crushing the conditioning records for the Knicks since he got in the gym. It’s encouraging to see how hard a worker he is already, and how great of shape in which he arrived. For a prospect billed as NBA-ready, at least offensively, the hope is he starts out strong and contribute from day one.

When asked about Thibodeau and his message from today’s camp, Toppin said he’s ready to play wherever he’s asked and doesn’t believe the coaching staff will put him in a position not to be successful or disadvantage him. “Play defense. Lock in on the defensive side and stay connected,” was today’s message, according to the neophyte.

Additionally, Toppin restated that he’s going to play wherever he’s asked and where he’ll play at his best when prompted about his preference in the frontcourt. Toppin also mentioned he’s been working with new assistant coach Kenny Payne, much to the delight of Knicks fans. Payne, the former Kentucky assistant, has a proven track record with molding and improving big men, so helping Toppin transition into a league is a welcome sight.

All we know so far is what we expected, more or less. While important questions about the offense and lineups will persist through camp, the central message was heard loud and clear today. They want to defend, and they want that to be part of their identity.

For a team in search of one, it’s important, and it’s at least a start.