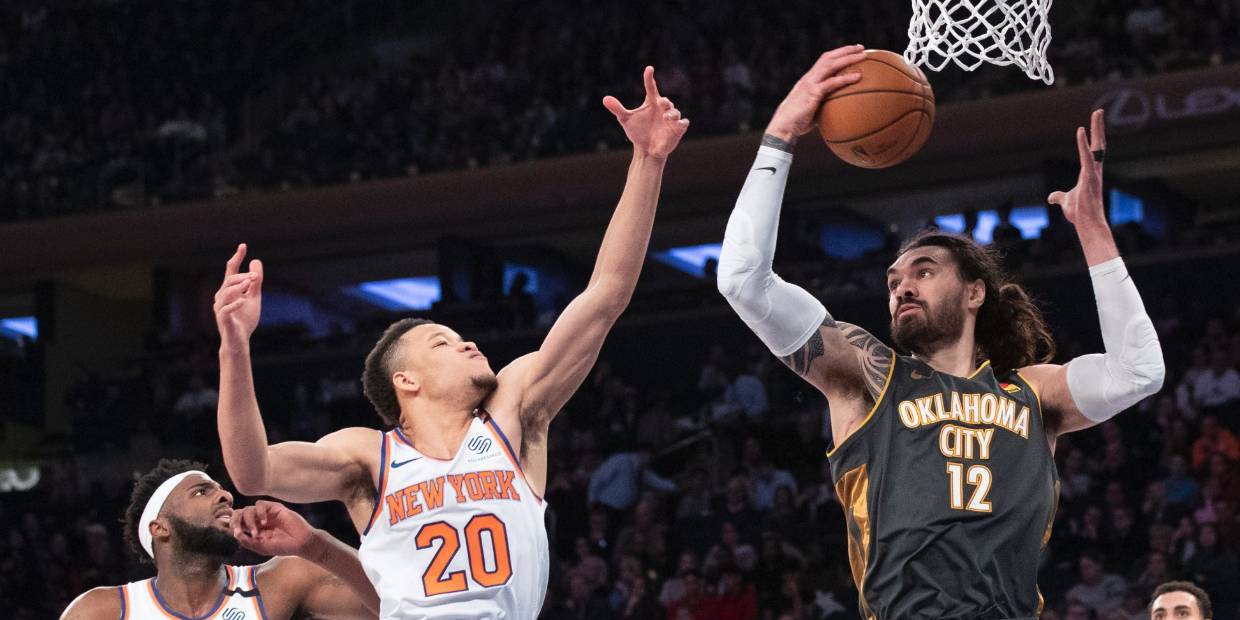 The Knicks could not find the bottom of the bucket on Friday night at the Garden, as Chris Paul and the Thunder cruised to a victory.

If you spent your Friday night watching the Knicks, my condolences. The New York Knicks (19-44) pieced together one of their more forgettable performances of the season, in a laugher of a loss to the Oklahoma City Thunder (39-24), 126-103.

It was a misleading quick start by the Knicks. They jumped out to a 9-4 lead, thanks more to Thunder bricks than good play. Once OKC settled down the lead evaporated just as quick as it grew.

There was never much rhythm to New York’s offense, or open court opportunities, resulting in a lackluster first 12 minutes, other than realizing Mitchell Robinson was back. The second quarter did not offer much of an upgrade. The flow of the game remained choppy, from both teams, with both teams engaging in an act of attrition.

Bobby Portis came in hot off the bench, scoring four of his first five attempts to briefly pull the game close before the Knicks went cold once again, and the Thunder really hit their groove to balloon the lead to double digits heading to the half. Oh, and the Knicks did not make a single three-pointer in the half, misfiring on all eight attempts.

Regrouping at the half never seemed to happen; the Knicks continued to look lethargic as the Thunder continued to ramp up the pace. The lead grew to 20 at one point, and the main difference between the two teams, other than talent, was three-point shooting and ball movement.

When it’s 95-78 heading into the fourth quarter, the rest of the game is a glorified scrimmage. It was good to see Frank Ntilikina return to action after tweaking his ankle earlier in the game. It was great to see Damyean Dotson and Allonzo Trier in action again. That’s where the positives end.

The Thunder had a 13-0 run to further pad the lead up to 30 points as they never surrendered back control. This is one of those games you games you forget ever happened.”

The Knicks’ offense, or lack thereof, in the first half was the key contributor to their halftime deficit. Payton was the leading scorer with 12 points, never a good sign when you’re jumpshot-impaired point guard is your leading scorer.

As a team, the Knicks tallied nine first-half assists and never established any sort of a rhythm. This problem persisted in the second half. The Knicks shot 16.7% from three-point range, had 18 assists compared to the Thunder’s 26, and struggled to cross the century mark.

Lack of rhythm combined with awful shooting is a recipe for disaster. Sprinkle in the fact the veterans were once again the focal point and you have catastrophe.

I am now convinced Elfrid Payton plays a lot of minutes so when Leon Rose makes the inevitable trade for Chris Paul it looks like a stroke of genius. In reality it is a massive upgrade–but that’s not my point here. Payton, like his buddy Randle, has become empty calories on the court; the numbers look like he’s having an impact on the game yet the there is a recent inverse relationship of Payton playing well and the Knicks playing well.

And there is also an alarming trend of Payton freezing Barrett out. It is highly unlikely that Payton is freezing Barrett out on purpose, but to watch plays like this it is easy to talk yourself into Payton not vibing with New York’s prized possession.

get elfrid on the next flight out of new york pic.twitter.com/mZWmWKg5X3

Payton had a team-high 18 points and the team got mauled. The Elfrid experiment has had its moments, but overall it is obvious Payton being good does not influence the team being good.

It was nice to be reminded for a split second that there are talented young players on this roster.

The Knicks finish their five-game homestand against the Detroit Pistons on Sunday before going on the road for three games.