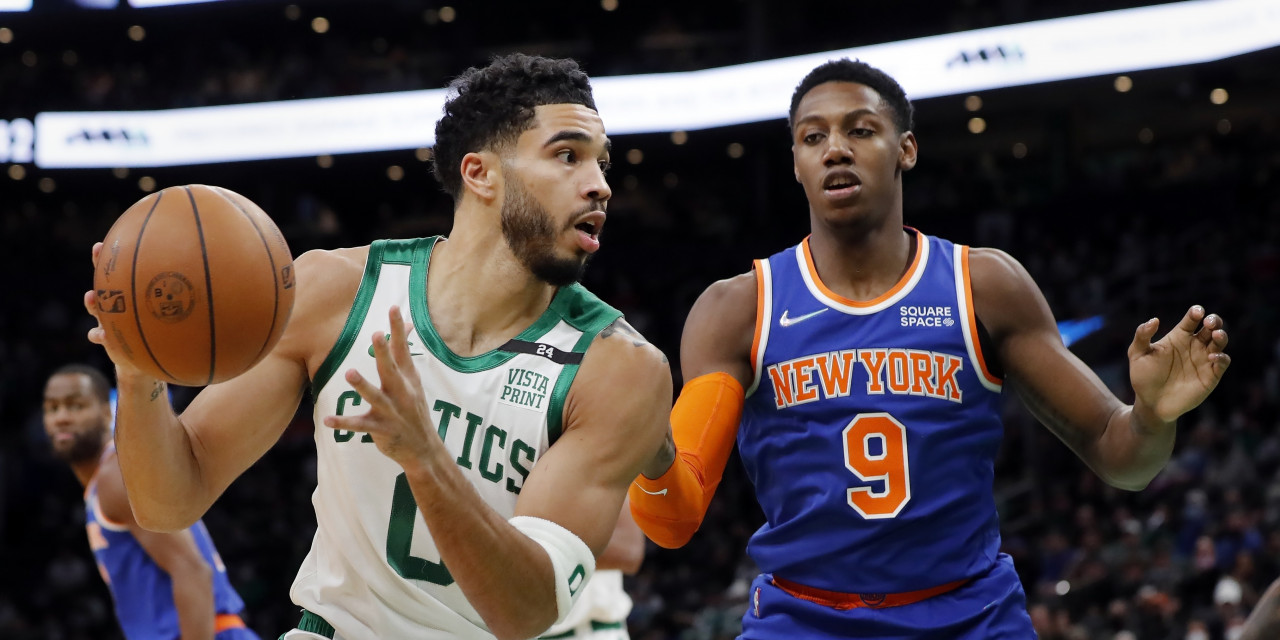 Without their certified Celtics killer Evan Fournier, the Knicks struggled to score after the first quarter, with their defense losing a grip, too.

In the second game of a home-and-home, the New York Knicks (19-21) headed up to Boston to take on the Celtics (19-21). After the Knicks won an exhilarating 25-point comeback on an RJ Barrett buzzer-beater, the Celtics took their swift revenge at home, hammering New York 99-75 at the TD Garden. The teams split their season series 2-2 with every home team victorious.

After an otherworldly performance by Evan Fournier (41 points) where he tied a franchise record with 10 three-pointers made, he sat out the tilt in Boston.

The Knicks got off to a strong start in the first quarter where RJ Barrett led the way to start with 10 points in the opening frame. Immanuel Quickley relished in his opportunity to start in place of Fournier and led the Knicks in scoring in the first half of the game. New York’s three-point shooting was on display early following Fournier showing in the previous game as the Knicks connected on seven three-pointers in the first quarter alone; six of them at the hands of Barrett and Quickley with three apiece.

Unfortunately for New York, they could not keep up their long-range barrage, as they were only able to connect on five more attempts from beyond the arc for the remainder of the contest. The second quarter was all Boston. The Celtics were able to erase the Knicks’ 10-point lead and hold them to just 16 points in the second quarter, taking a 44-42 point into the half that they would not relinquish the rest of the way.

The second half started with the Knicks’ usual third-quarter woes. The Celtics were able to build a double-digit lead as New York went cold and could not buy a bucket in the quarter o’ doom. The Celtics three-point shooting picked in the second half as well after only connecting on three triples in the first half; they reversed their fortunes and connected on nine in the second half.

Free throw shooting with a huge disparity in the game a Boston took full advantage at the charity stripe. The Celtics shot 15-of-17 from the line while the Knicks shoot only 40% from the line.

RJ with his 4th triple of the game 🎯 pic.twitter.com/4YbdmpRSLg

The Knicks scored a season-low 79 points against the Celtics in a game in which they scored 26 in the first quarter. New York failed to eclipse 20 points in the other three quarters—from the second quarter on the Celtics outscored New York 78-49. The Celtics benched also dominated, scoring 33 points while the Knicks bench just six points on two Quentin Grimes three-pointers.

RJ Barrett started the game strongly but ended the night with 19 points on 7-of-21 shooting with four three-pointers to go with six rebounds, two assists, and two steals, but he only finished 1-of-5 from the free throw line. Immanuel Quickley shinned in his second start with 18 points on an efficient 7-for-11 shooting. Julius Randle struggled shooting, going 6-for-19 from the floor, but he was able to tally a double-double with 13 points and 12 rebounds along with six assists (and six of New York’s dozen turnovers).

The Knicks need to shake this one off as they head back to Madison Square Garden to face off against the San Antonio Spurs on Monday night.