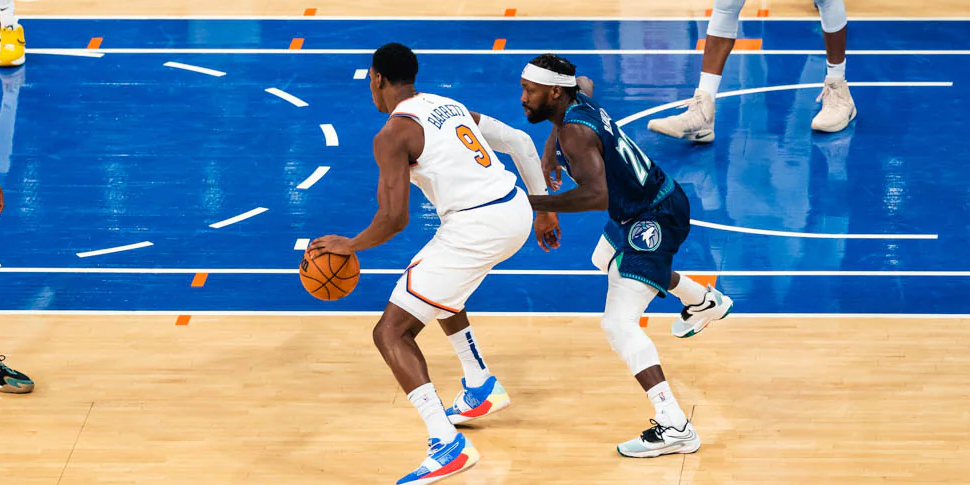 Spurred on by a 40-point third quarter, the Knicks raced to the finish line with the Timberwolves, coming up short.

The New York Knicks (22-23) fell to one game under .500 after a heartbreaking loss to the Minnesota Timberwolves (22-22) by a final score of 112-110. It was a hard-fought game throughout, but New York was unable to recover from their sloppy play earlier in the contest and in spite of Kemba Walker’s late-game heroics.

It marked the return of Walker to the starting lineup for New York since injuring his knee and sitting out for nine days. He had not played a game with the Knicks since their contest in Detroit on December 29th, 2021.

The last time the Knicks and Timberwolves faced off, Minnesota was severely depleted due to COVID-19 protocols. It was still an extremely competitive contest, but the ‘Bockers were able to eke by with a victory.

In the first quarter, it was a back-and-forth affair for both teams. While the strength of Minnesota’s Karl-Anthony Towns was showing early on in his matchup with Mitchell Robinson in the paint, Robinson was able to return the favor with help from the rest of the starters looking to feed him at the rim. However, the Knicks struggled with protecting the ball, as they turned it over eight times, allowing the Timberwolves to control the offensive pace. It was the epitome of sloppy, and the T-Wolves were up seven to end the first period.

To begin the second quarter, turnovers continued to plague New York with no clear answer to Minnesota’s defensive effort. RJ Barrett, who had exited the game after appearing to tweak his ankle, reentered the game with the bench unit. He got to the rim with more efficiency than he had in the first quarter, but he along with the rest of the Knicks were befuddled by the Wolves’ strong defensive presence at the rim. While there were some flashes of coherence with the Knicks’ bench on the floor, the Timberwolves were the dominant squad on both ends of the court. To end the half, Minnesota was up 10 on New York with Evan Fournier leading all scorers for the Knicks with 13 points on 5-of-7 shooting. They committed 13 turnovers to the Wolves’ four through two quarters.

New York needed to clean up their act in the second half in almost every sense of the word. Kemba Walker, back from nine games off, took charge of that challenge, and began the third quarter with several much needed shots to help get the Knicks back within reach of the lead against the Timberwolves. Evan Fournier also became a human flamethrower as he and Walker kept New York competitive after finding some semblance of a rhythm. In addition to that tandem heating up, the Knicks’ all-around team defense, as well as their aggression offensively, counteracted the Wolves’ attacking style of play, helping them to climb back and take the lead by five over Minnesota heading into the fourth quarter.

The fourth opened up with some stagnant ball movement, which allowed Minnesota to tie the game back up early in the quarter. But Julius Randle helped to keep New York’s momentum in their favor with some mid-range jump shots in the clutch. Robinson fouled out midway through the quarter, and Gibson collected his fifth personal by the midway point in the fourth. Even with this bad turn of events at the already thin center position, Walker tried to play hero. He caught fire from beyond the arc and hit several big three-pointers to extend the Knicks’ lead over the Timberwolves. But a big shot from Karl-Anthony Towns and some more careless ball-handling resulted in a one-point lead for Minnesota with fewer than 30 seconds left in the fourth. They never relinquished the lead, and the Knicks lost a heartbreaker to Minnesota in the final minutes of the game.

Fournier was the leading scorer for the Knicks with 27 points on 10-of-17 shooting and four assists. Randle nearly recorded a triple-double but fell short with 21 points, nine rebounds, and nine assists. Walker impressed in his return to the lineup with 19 points and four assists. RJ Barrett woke up after a sluggish start to the contest and ended with 17 points and six rebounds but had an abysmal seven turnovers (totaling 13 turnovers between yesterday and today). Mitchell Robinson was solid once again even as he fouled out, grabbing six rebounds and scoring eight.

The highest scorer for the Knicks’ bench unit was Immanuel Quickley, who only had six points. Taj Gibson had five points and four rebounds in relief of Mitchell Robinson. Quentin Grimes logged 17 minutes, scoring three points and getting one steal. Obi Toppin scored four points and grabbed four boards in nine minutes of action, and the usually reliable Alec Burks recorded no points in his return to the bench, including the missed game-winner.

The Knicks will face the New Orleans Pelicans on Thursday night as they look to salvage their homestand with a victory against Brandon Ingram and the sputtering Pelicans squad.