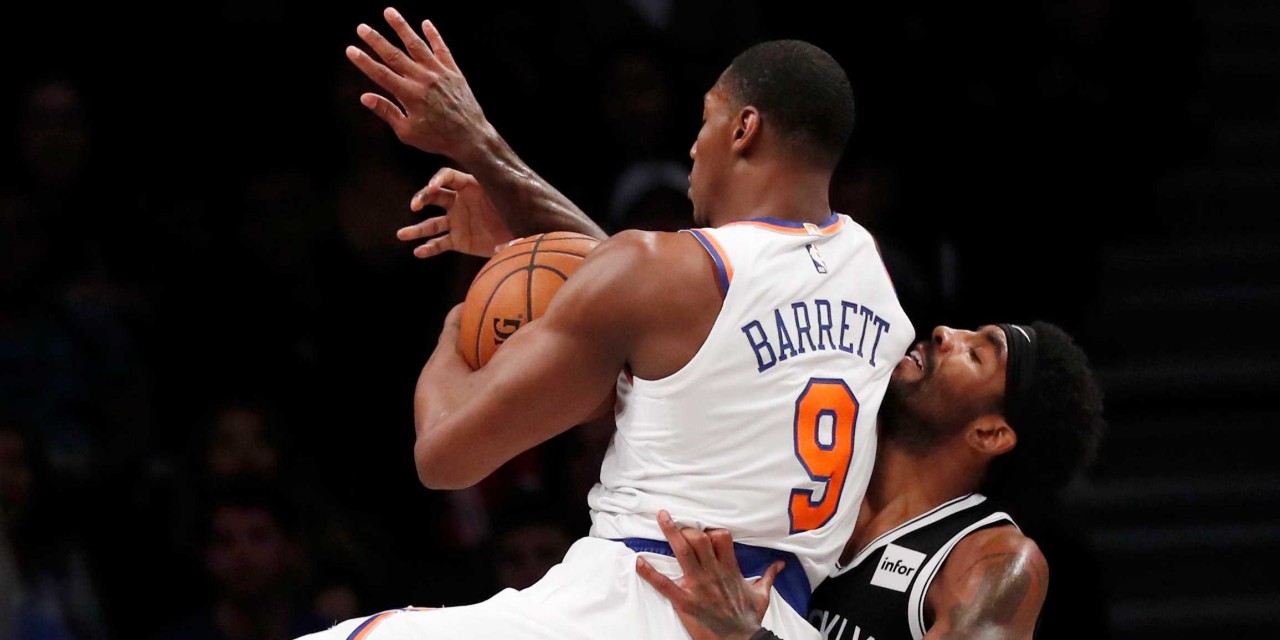 Despite a fourth quarter comeback, the Knicks lost to their crosstown rivals the Brooklyn Nets at Barclays Center.

David Fizdale decided his experiment starting Allonzo Trier instead of one of three point guards was smart enough to last a single game. Elfrid Payton was brought into the starting lineup along with R.J. Barrett, Marcus Morris, Julius Randle, and Mitchell Robinson. Robinson, coming off of an ankle sprain that kept him out of the season opener in San Antonio on Wednesday, made his debut on Friday.

Michell Robinson returned and picked up where he left off last season causing havoc on the defensive end. The Knicks needed him to defend the paint. He was kept to only 17 minutes in his debut, but managed to corral seven rebounds, four steals, and one block.

The defensive performance as a whole was ugly, however. The Knicks were guilty of biting on nearly all pump fakes, leading to a ton of playmaking opportunities for the Nets. Bobby Portis continually found himself out of position in pick-and-roll scenarios, leading to easy buckets at the rim. Kevin Knox continued to get beat by anybody who takes him off the dribble; tonight’s lucky contender was David Nwaba, who slammed home a huge dunk on Knox in the first quarter.

Julius Randle, the Knicks’ top player from free agency, had a game from hell. Randle tended to force the issue rather than make the right play, and liked to back the ball down from the mid to high post rather than pass or allow another player a possession. When his shot wasn’t falling, and he couldn’t score at the rim, he couldn’t contribute at all. If opening night was the positive of what he can bring this season, Friday night was the negative. He finished with 14 points on 15 shots with six turnovers, in a performance he’d surely like to forget.

The team struggled as a whole in the halfcourt, with slow actions off the ball and sloppy entry passes. Without a clear vision on offense under Fizdale, it’s tough for the Knicks to find an offensive identity and produce consistently. Fizdale did make the correct rotation adjustments in the second half, as Taj Gibson stayed on the court and Trier, Barrett, and Wayne Ellington were allowed to cook on offense. Each had the hot hand for extended stretches.

Barrett continues to be a reason to have faith in this Knicks team. His jump shot has been better than anticipated, and he has a natural knack at attacking the rim. His performance on both sides of the ball has been promising, showing a high I.Q. for the game. He finished with 16 points on 16 shots with six steals.

The Knicks managed to make a comeback down the stretch of the fourth quarter, coming back from down 19 at one point to taking the lead with just three minutes remaining. Wayne Ellington, who didn’t appear in the first half, made a couple of threes down the stretch that helped New York go on a 15-2 run and take a 109-106 lead, the first since the opening moments of the game.

Kyrie Irving, the Nets’ point guard who spurned the Knicks in free agency, made back-to-back buckets, one a mesmerizing step-back three, to take a two-point lead. Needing two with 20 seconds left, Fizdale called a play for Randle, who dribbled it off his own foot. The Nets took the game, 113-109.

»READ: Opposite styles will clash in Nets-Knicks series

»READ: A brief history of the Knicks-Nets rivalry