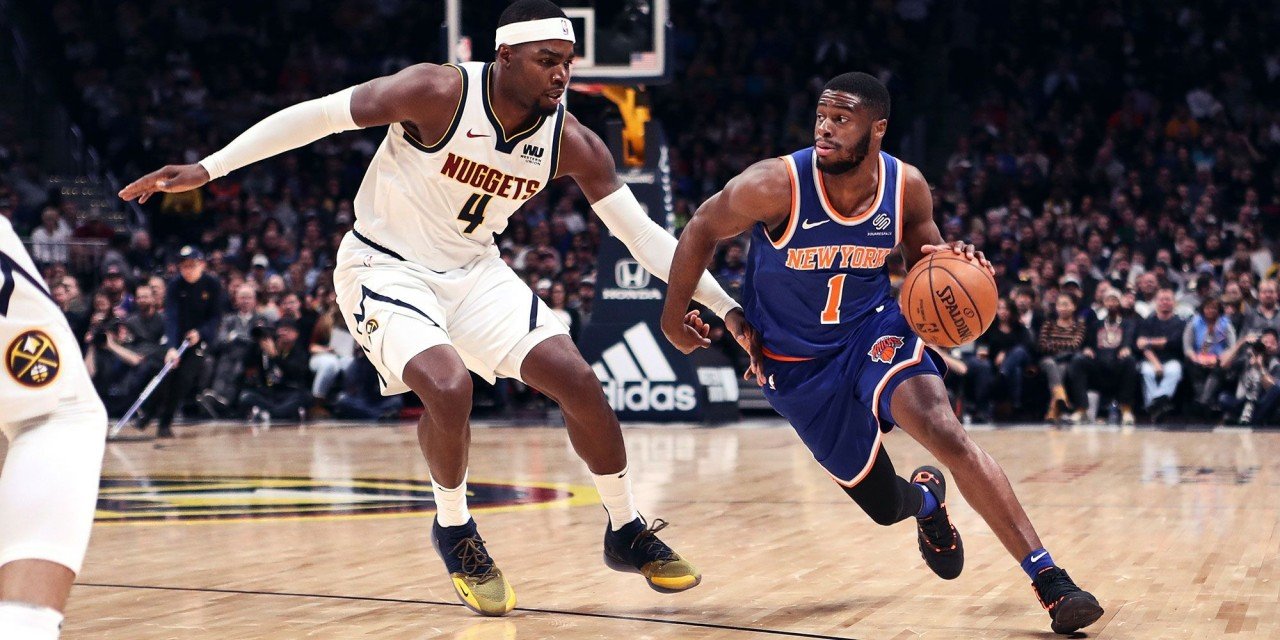 With the end of another arduous campaign in view, the Knicks (14-58) hope to strike gold against the Denver Nuggets (48-22) in this season’s penultimate Friday Night Knicks matchup.

After being getting trounced 137-116 on Wednesday night to the Utah Jazz, the Knicks host the Denver Nuggets in tonight’s penultimate edition of Friday Night Knicks. The Nuggets enter tonight’s contest with a 48-22 record on the season, good enough for second in the Western Conference standings. The Knicks currently lead the NBA Tankathon, boasting an NBA-worst 14-58 record.

Here’s what to look for in tonight’s matchup.

It’s been a roller coaster ride of a rookie campaign for the ninth overall pick.

On Wednesday night, Knicks fans were pleased to watch one of Kevin Knox’s best performances of the season. Knox posted a team-high 27 points (10-17), while adding eight rebounds and three assists. The question entering tonight’s game: will Knox be able to replicate this type of performance?

The last time Knox had a similar scoring outing was on January 13th against the Philadelphia 76ers. In that game, Knox dropped a career-high 31 points and shot over 50 percent from the field. In the following outing, Knox posted just 5 points and went 2-11 from the field. This perfectly summarizes Knox’s up-and-down rookie season. With an injury-riddled Knicks team, Knox will have plenty of opportunities to continue his hot streak into tonight’s contest. This will surely be something to  keep an eye on.

As if it wasn’t already hard enough to watch this team.

In their last contest, the Knicks were without Dennis Smith Jr., Frank Ntilikina, Kadeem Allen, Allonzo Trier, and Noah Vonleh, who were all out due to injury or illness. An official actives/inactives list has not yet been released, but it appears that Trier and  Smith Jr. will not be playing. As for Vonleh and Allen, they will all be game-time decisions.

Easily the most exciting Knicks rookie to watch this year, Robinson has been a menace in the second half of the season. Averaging 2.43 blocks per game in just 19 minutes of play, Robinson is currently third in the NBA and first among rookies in this statistic. After being quiet, at least for his own standards, over the past few games, Big Mitch Energy was in full display Wednesday night.

Robinson posted a double-double with 14 points and 12 rebounds while also blocking three shots. After playing just 13, 21, 15, and 14 minutes in the four games leading up to Wednesday’s contest, Robinson played 30 minutes in the last game. Expect big minutes for Mitch in tonight’s contest, especially considering who they’re going up against on the other side of the rock.

Mitch is the only bright spot in my life pic.twitter.com/jBmY7Lwgmj

Who Can Stop The Joker?

It’s a valid question. Can anybody really stop this guy? On the offensive side of the ball, Jokic is a Swiss Army knife–type talent.

Defensively, it’s a totally different story. The seven-foot center averages 20.2 points, 7.6 assists, and 10.7 rebounds on the season. One of the best scoring and passing bigs in the league, the Knicks have their work cut out for them tonight. Keep an eye on DeAndre Jordan and Mitchell Robinson, who have a tall task ahead of them in containing one of the NBA’s most dominant players.