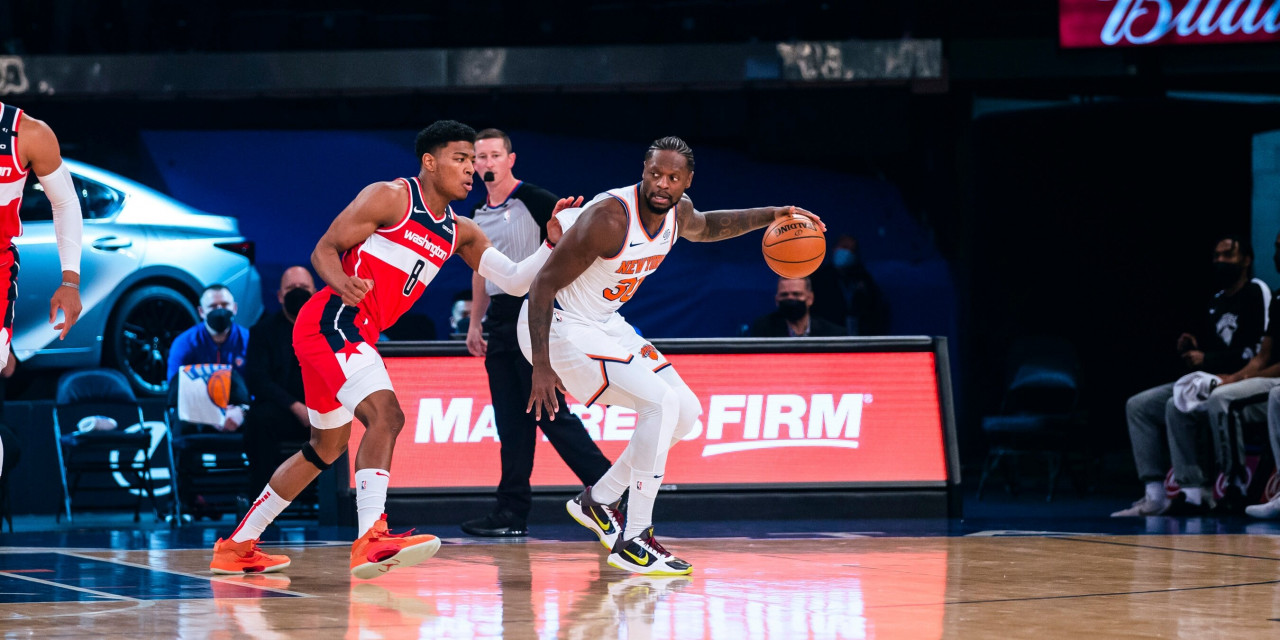 The Knicks will travel to the nation’s capital to take on the Wizards in their lone preseason game away from home.

The New York Knicks opened up their 2021 preseason with a resounding victory over the Indiana Pacers. Up next on their schedule is the Washington Wizards, who the Knicks will play thrice during the regular season. Tonight’s matchup will take place at the Capital One Arena at 7:00 p.m. ET.

After an eighth-place finish and a first-round loss in the playoffs last season, the Wizards revamped their roster around franchise star Bradley Beal with a gigantic five-team trade. They traded away Russell Westbrook and several second-round draft picks to receive Spencer Dinwiddie from the Nets; Kyle Kuzma, Kentavious Caldwell-Pope and Montrezl Harrell from the Lakers; Aaron Holiday from the Pacers; and the draft rights to G League Ignite forward Isaiah Todd. Washington also added sharpshooter Corey Kispert, drafting him 15th overall out of Gonzaga.

The new-look Wizards will have a new coach as well, as Wes Unseld Jr. takes the reigns of his first professional team. The son of the NBA Hall of Famer has been an assistant coach in the NBA since 2006.

While the Wizards look to find their identity as a team, the Knicks are looking to improve theirs. The last game proved just how much help the new backcourt of Kemba Walker and Evan Fournier could be. Their shooting and ability to score made Julius Randle’s life much easier and helped New York build a sizable lead in the first quarter that they never gave back.

As they gain more chemistry together, the Knicks’ starting lineup could be a force to be reckoned with offensively. With two very good floor spacers alongside Randle and RJ Barrett, as well as a terrific lob threat in Mitchell Robinson (once he becomes ready to play again) the possibilities for how New York can dismantle defense are plentiful.

Due to personal reasons, Randle will not make the trip to Washington, D.C. The alleged reason in question is the birth of his second son. Tom Thibodeau didn’t dismiss that notion when he was asked about it on Friday. He also said that Obi Toppin and Kevin Knox will see an uptick in minutes due to Randle’s absence.

Julius Randle was not at practice and will not play tomorrow in Washington. Thibs sited "personal reasons." When asked if it had to to with fact Randle's wife is due to give birth, Thibs smiled and said "let's just say it's a good reason."

Matchup to watch: Dinwiddie vs. Walker

The matchup between each team’s new respective point guard will play a pivotal role in this contest. Since neither lead guard is a particularly strong defender, finding ways to slow them down offensively will test each coach’s defensive tactics.

Although Dinwiddie has the size advantage on Walker in terms of both height, weight and wingspan, he’ll be in for a tough night trying to contain New York’s new point guard. He has the quick release on his shot to negate height disadvantages and the quickness to get around anyone. Throw in how he can do damage off the ball by relocating and spotting up—as well as the playmakers that surround him—and New York should have an obvious go-to player for this game.

Conversely to Walker’s playstyle, Dinwiddie is the type of player who can bulldoze through Walker en route to the hoop. He’s very adept in the pick and roll and has a perfect partner in crime—tall, explosive center Daniel Gafford—to do so. The Wizards employ a host of shooters around them, namely the do-it-all scorer Beal, giving them ample space to operate. Dinwiddie’s playmaking, finishing and foul-drawing skills make him a difficult player to contain now that he’s back at full health.

Neither point guard will be left alone to contain the other. Thibodeau and Unseld will have to mobilize the entire defense to stop either guard from creating advantages. The Walker-Dinwiddie matchup presents a matchup of player skill and coach strategy that should be entertaining, though may not go very long. It’s still preseason, after all.

Too many rooks in the kitchen

The playing time for Grimes and McBride may be tough to come by. They’ll likely be seen in spurts once the real games get underway unless they’re stepping in for someone unavailable to play. Although they both looked promising in the Summer League, the jury may still be out on how ready they are to contribute. As Thibodeau looks to rest key players during the preseason, Grimes and McBride may only get a brief opportunity to show what they can do against true NBA competition.