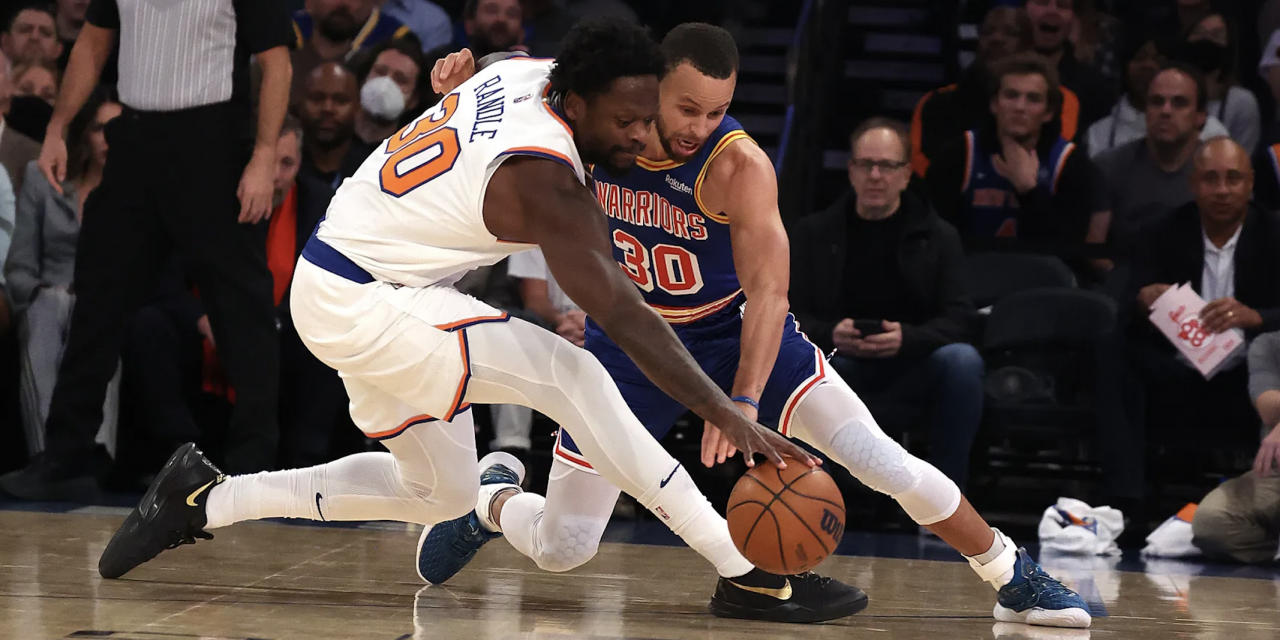 The Knicks look to build off of quality wins versus Utah and Denver, heading to California to take on Steph Curry and the Warriors.

The New York Knicks (8-7) travel to San Fransisco to play the reigning champion Golden State Warriors (6-9) tonight at 10:00 p.m. EST on MSG and ESPN. New York’s 5-game road trip has gotten off to a good start, beating a hot Utah Jazz team on Tuesday, followed by a win over a Jokic-less Denver Nuggets squad. After Golden State, the Knicks will head to Phoenix to play the Suns on Sunday afternoon and will wrap up their road trip by visiting the Oklahoma City Thunder on Monday night.

Since Sunday’s embarrassing loss to the Thunder, the Knicks have made adjustments to their rotations, opting to play nine players as opposed to the 11-to-12-man lineups we’ve seen Tom Thibodeau roll out at times so far this season. From the looks of it, the adjustment was much needed and has worked in the Knicks’ favor as of late, picking up two quality wins and seeking their third in a row.

While the Nuggets were without Nikola Jokic, playing in Denver is always a challenge given the high altitudes. With a great two-way game from Julius Randle and late-game heroics from Jalen Brunson, the Knicks were able to take care of business, winning 106-103. A major factor in the win was their ability to take care of the ball and force turnovers on the defensive end, winning the turnover battle seven to 15. New York must continue to protect the ball if they want to win against the 2022 NBA Champions.

The Warriors haven’t gotten off to the start they were looking for following their championship run just a few months ago. Stephen Curry has continued to shine, averaging 32.8 points through 14 games thus far. But the story for the Warriors has been the inconsistencies from their supporting cast. After signing large contracts in the offseason, Andrew Wiggins and Jordan Poole’s efforts have not been enough as the Warriors have yet to win a game on the road so far this season in eight tries. Given the Warriors’ unexpected start, it’ll be an important game for the Knicks to capitalize on as Golden State looks to find its footing.

Obviously, the Knicks’ point of emphasis should be to slow down Curry. One of the greatest players to play the game, Curry will look to get to his spots early and often. Jalen Brunson will likely be tasked with guarding Curry, as Reddish and Barrett will have to guard Klay Thompson and Wiggins in one of the more difficult perimeter matchups for the Knicks this season.

Rebounding will be a huge key to the game. Kevon Looney and Draymond Green pose as dangerous threats on the glass, as they displayed each and every game during the 2022 NBA playoffs. Rebounding has been a strength of the Knicks this season, ranking in the 3rd for rebounds per game this season. But with Mitchell Robinson’s availability uncertain for tonight’s game due to a knee injury, New York will need Julius Randle, Isaiah Hartenstein and Jericho Sims to fill in his shoes and clear the glass in order to continue pushing the pace, where the Knicks currently rank 9th in the league. If the Knicks can’t secure rebounds, it will come back to haunt them, as Golden State leads the league in pace this season despite their rough start.

Immanuel Quickley could be an X-Factor for tonight’s game. Brunson isn’t regarded as a great defender, so he could be a liability when it comes to guarding Curry. This means that IQ could play some key minutes down the stretch to halt the two-time MVP should things get out of hand with Brunson on him.

Statistically speaking, Quickley has been solid when it comes to defense this season, being within the 99th percentile when it comes to the opponent’s effective field goal percentage. Quickley’s defense has continued to go under the radar recently, but tonight it will be important to watch given that quality defenders in Reddish and Barrett will be focused on limiting looks for other players. Check out IQ’s game-saving stop on Jamal Murray from Wednesday night:

Between Curry, Thompson, Wiggins and Poole, New York will have its hands full defending the perimeter. But given their chemistry as of late, don’t count the Knicks out against the Warriors in a primetime matchup on a Friday night in the Bay Area.

Jake is a staff writer for The Knicks Wall. He is also a Sports Media and Public Relations double major at the University of Rhode Island.