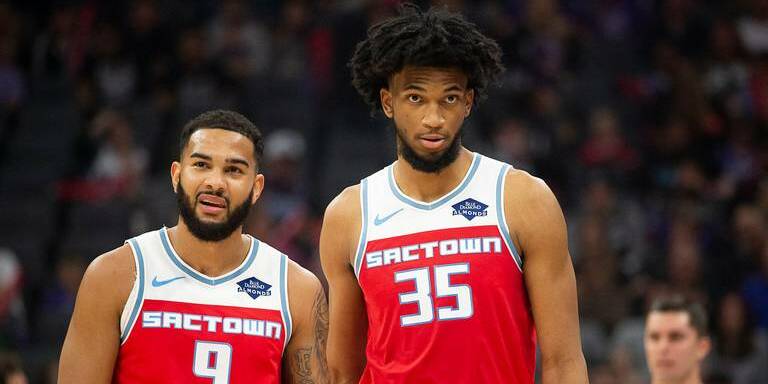 The Knicks are coming off their first win in eleven tries and face a Kings team without De’Aaron Fox but on a three-game winning streak.

Even though it wasn’t the prettiest of victories, the New York Knicks (5-20) came away with a win over the Golden State Warriors to help boost morale a bit. The devil is in details—namely, a 66-44 lead over the Warriors at halftime turned into a two-point win in overtime—but for now, the Knicks got a win and can take some positives away from this game and move forward.

But what are those positives for head coach Mike Miller? Elfrid Payton played well (well enough to wonder whether he should get some reps at the starting point guard spot); R.J. Barrett had a double-double after a few poor games; and Marcus Morris continues to look like New York’s best trade chip. There are still some questionable rotation decisions—Mitchell Robinson—but Miller is barely into the job, so we’ll table them for now.

RIP the 2018–19 fun Sacramento Kings. Last season, despite a 39-43 record, Sacramento was fun. De’Aaron Fox led the charge as the Kings pushed the pace, Willie Cauley-Stein and Marvin Bagley were two athletic bigs running the floor and their two wings, Buddy Hield and Bogdan Bogdanovic, spread the floor and kept opponents on their toes. It was fun to watch, to say the least.

Out goes Dave Joerger, in comes Luke Walton and everything changed. Sacramento went from fifth in pace to 29th in the league. Part of that could be Fox’s injury, but Sacramento went and added veterans to make the team slower and more malleable to Walton’s scheme. Hield and Bogdanovic are still firing at will and, when healthy, Fox is still dangerous in finding his opponents.

But it’s not the same. The recent additions—Harrison Barnes, Trevor Ariza, Dewayne Dedmon, Richaun Holmes, and Cory Joesph—have added defensive flexibility, but Sacramento ranks 16th in overall defensive efficiency, leading questions to how good Sacramento will be in the long-term, or at least until the end of the season.

Ultimately, they have young pieces, but unless one of Bagley or (pending restricted free agent and future Knicks target) Bogdanovic takes a step forward, they feel like a team constantly fighting for a sixth, seventh, or eighth seed in the Western Conference.

Frank Ntilikina on Buddy Hield: This should be the assignment. Ntilikina has been a pretty good perimeter defender this season and while his assignments are normally point guards, I would like to see him defend Hield. Hield is a shooter, but his movement is special, making him one of the best shooters on the move in the league. Keeping Ntilikina on Hield as he comes off of screens will be New York’s only hope to stop him.

R.J. Barrett: Ball-handler: With no Fox on the other side of the floor, New York should try to put the ball in Barrett’s hands and allow him to attack downhill. Cory Joseph is a good defender in his own right, but Barrett would have a decent size advantage and could find himself in the midst of back-to-back solid games if he’s allowed to attack Sacramento’s defense.

Dennis Smith Jr. is probable, the team announced, after missing the last game with an illness. Wayne Ellington is out (sore left Achilles) while Allonzo Trier is doubtful with concussion symptoms.