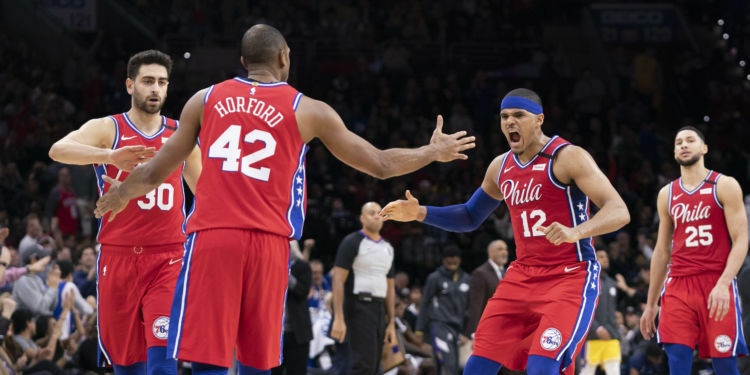 A trade between the Knicks and Sixers would effectively bring a veteran to New York along with more draft capital for the rebuilding team.

Although the New York Knicks are not participants in the 2020 NBA playoffs, the results and performances from the postseason may impact the team. Teams impressing and disappointing opens up new opportunities for president Leon Rose to shape New York’s roster.

The Philadelphia 76ers offer one such opportunity. They left the 2019–20 season in shambles, losing in the first round to the Boston Celtics in four games. The Sixers’ dismantling at the hands of their division rival exposed the horrendous roster construction around their franchise cornerstone (and former client of Rose at CAA) Joel Embiid.

Although only one contest was decided by double digits, the Celtics had their way with the Sixers by troubling Embiid in the post, containing everyone else and letting Jayson Tatum cook. Only the Brooklyn Nets, who had nearly a whole new roster just for the bubble, and the Indiana Pacers, who didn’t have the services of their All-Star big man Domantas Sabonis, also failed to win a playoff game this year.

The Sixers were also missing an All-Star, point guard Ben Simmons, due to a knee injury. Still, Simmons probably wouldn’t have been enough to flip this series’ outcome and his absence doesn’t do much to quell Philadelphia’s worries. The team has regressed after years of growing into a playoff team and its chest of assets, which used to be among the most fruitful in the league, is almost empty. The once up-and-coming Sixers seem to be trending downward as the team’s limitations are fully exposed and its future is the bleakest it has been in the Embiid era.

One of the most important moves Philly can make this offseason is ditching the contracts of Al Horford and/or Tobias Harris. Both veterans performed well below the expectations that came with the massive contracts they signed last offseason. In order to properly retool, the Sixers need to free up cap space and rid themselves of at least one of those contracts.

The Knicks could improve their roster and add more assets by acquiring Horford or Harris. Since both players are grossly overpaid, New York would receive compensation for taking on their contracts, most likely in the form of draft capital. Philadelphia has its own first-round pick in every draft moving forward and at least one second-rounder in every draft but 2022.

Taking on a big contract is essentially punting on drastically improving the team in the short-term future, though. Although Horford and Harris are still decent players, losing the flexibility to sign free agents limits how big the Knicks’ next step towards success is—though landing marquee free agents is not a skill the franchise has historically possessed.

If enough assets are attached, taking on one of those hefty contracts could benefit New York’s rebuilding efforts. But which player is more preferable to accept in a cap-dumping trade? For both financial and basketball reasons, it’s Horford.

The financial outlook leads to an indisputable conclusion: Horford’s contract is an easier pill to swallow. His deal is worth $81 million over the next three years with $14.5 million partially guaranteed in the final year. Harris is owed $148.9 million over four years.

Horford also improves New York more than Harris does on the court. Acquiring Horford works out easier on the depth chart, as he and Mitchell Robinson would fill the rotation at center. Incumbent starter Taj Gibson’s contract for next season is only a partial guarantee, so he could be waived without causing much harm to the cap or sent to Philadelphia in the trade.

It’s tougher to find a spot for Harris. Ideally, he would play power forward, but Julius Randle doesn’t appear to be on the move. Does newly hired head coach Tom Thibodeau bench one of the highly paid forwards, which runs the risk of alienating the non-starter, or play them together, creating a tragic defensive situation?

Adding Harris to the Knicks’ offense would be a tragedy, too. Consider Harris to be a modernized Randle: he’s a strong forward that throws his body around in the post, but opts for jumpers more than attempts at bulldozing through the defense. He also shoots triples, at least, converting on 36.7% of his 5.0 three-point heaves per game.

Harris shoots 38% on 3.6 catch-and-shoot three-pointers per game, but he isn’t the floor spacer that a team building around young non-snipers in R.J. Barrett and Mitchell Robinson would ideally want. An offense oscillating between Randle and Harris would be horrific. The only positive Harris would bring is being a decent three-level scorer.

Horford doesn’t boast the scoring abilities Harris does, but he works better for an offense that should be centered around young ball-handlers. Horford can shoot from deep—shooting 35.0% on 4.2 attempts per game—but his primary benefit to New York’s offense is his playmaking acumen. He averaged 4.0 assists and just 1.2 turnovers per game, resulting in an assist-to-turnover ratio of 3.38, the 17th best mark in the league, per NBA.com.

The Knicks don’t need any more score-first players. Having Horford, a playmaker and spot-up shooter, would benefit New York more than a ball-dominating scorer like Harris. Especially considering Horford being the more impactful defender, he is the better option for New York to take on than Harris.

While the decision to acquire a bloated salary would stifle New York’s short-term flexibility, it would provide the franchise with more assets. The Knicks should strongly consider making such a trade so long as the draft capital is adequate. The Sixers offer two chances for that type of deal, one of which is worth it for New York.